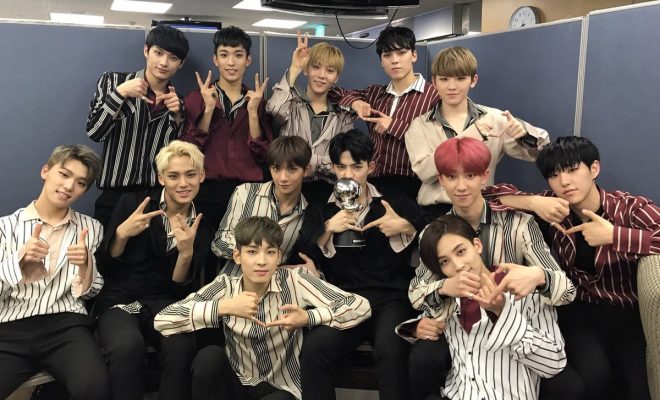 A mixture of surprise, happiness and gratitude overwhelmed the members as they took the win against fellow nominee Jung Seung Hwan by garnering 6,834 points. Member Seungkwan cried as leader S.Coups delivered the winning speech.

S.Coups extended his gratitude to Carats for making the award possible for the group. “Thank you for allowing the 13 of us, SEVENTEEN, to able to give our stage and music,” he said. He also promised to perform and make songs while keeping their fans in mind.

He further expressed his thanks to Pledis Entertainment and the people of the agency, including their managers.

Member Jeonghan took the microphone to thank their fans once again. “This is the first time that we won in M Countdown, thank you so much,” he added.

Vocal team leader and producer Woozi thanked their parents and apologized to not having acknowledge all people who helped them in the album.

The members then showered Woozi with kisses during their encore performance. S.Coups led the unsuspecting Woozi at the center and kissed his head, which was followed by Mingyu. The general leader of SEVENTEEN then encouraged the other members to do the same, resulting to each one planting kisses on Woozi who shyly accepted the gesture.

SEVENTEEN bowed and shook hands with the other idols, who also performed at the show. Performance leader Hoshi was spotted running excitedly towards SHINEE‘s Key, who hugged and shook the hands of the members in congratulations.

All members of the group did a big bow to their fans, and even tried creating a human pyramid. The encore stage ended with a loud cheer of “boom boom”.

Global fans commemorated the win by using the hashtag #BoomBoom1stWin on Twitter. The hashtag topped the worldwide trend in no time.

SEVENTEEN’s third mini album ‘GOING SEVENTEEN’ is ‘booming’ in sales as it reaches over 130,000 copies since its release on December 5. It has also topped Gaon’s weekly album and social chart.