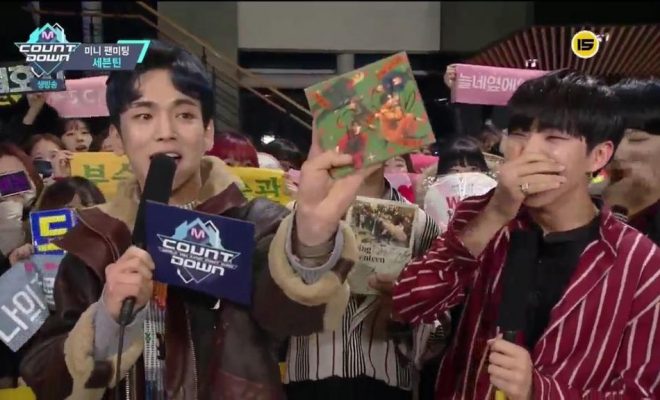 The self-proclaimed Shawol once again showcased his endearing love for SHINEE. When asked by Key what “big happenings” meant to him, Hoshi responded that it is being together with SHINEE, whom he respects a lot. He also told Key that he watches their concert too.

The SHINee member responded positively to his junior’s admiration, and gifted him with a signed ‘1 of 1’ album with Hoshi’s name largely written on it. Hoshi accepted the gift with a big smile on his lips.

Fans have also acknowledged that the SEVENTEEN member is “an epitome of a successful fanboy”. They also commented on Hoshi’s adorable reaction towards Key’s gesture. A fan even commented if the mini fan meeting was for Carats or Hoshi.

when you finally meet your idol

LOOK AT HOW HAPPY HOSHI WAS WHEN KEY SAID THAT HE IS GIVING HIM SHINEE'S SIGNED ALBUM pic.twitter.com/vlPN9KySh1

But the mini fan meeting was not the end of Hoshi’s display of his inner Shawol-ness.

Fans also took notice of Hoshi’s running towards Key during SEVENTEEN’s encore stage. He hugged Key and jumped around him, sharing excitement with his idol.

Hoshi has been vocal of his fondness of SHINee, who, according to him, inspired him to his dream of becoming a singer.