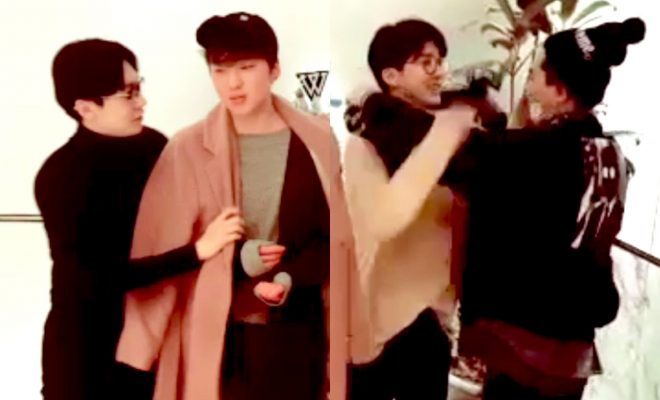 WINNER’s Mino Brags That He Is A History Doctor; Seung Hoon Accidentally Destroys Their Christmas Tree

Korean boy group WINNER gathered together in a broadcast of V Live for the first time following the departure of youngest member Nam Tae Hyun.

Seung Yoon, Jinwoo, Mino, and Seung Hoon began the show with excitement as they sang and danced to the tune of a carol around a Christmas tree. The members also updated Inner Circles of their recent activities.

Rapper Mino shared that he is currently studying history. “When it comes to history, I’m like a doctor,” he bragged. According to him, the story of the Battle of Myeongnyang is the most interesting topic he has read so far. He went on to recount the story.

Seung Hoon teased Mino of having the capacity to teach history now. But the latter deferred, and said he can only teach until the Japanese invasion.

“I can’t take questions on other topics,” he reasoned.

Dancer and rapper Seung Hoon said that he is working with the members to record for their album after completing the filming of his variety show, Eat Sleep Eat.

Leader Seung Yoon, on the one hand, recently joined the cast of Trip or Trap, and asked fans to look forward to it. He also shared that he filmed a web drama with member Jinwoo. The two WINNER members filmed Love For A Thousand More, which airs every Monday, Wednesday and Friday via Naver TV Cast.

Eldest member Jinwoo also performed at the Seoul Arts Center for The Little Prince. “I felt a lot of pressure, but still, I did my best. So I have no regrets,” he said.

Jinwoo shared that he is paying attention to his hair care, to which the members commented that his hair suits him, and he looks like an artist.

The members decided to play each other’s secret friend for Christmas by doing various missions. The member who gets caught is bound to have his face drawn on by the members.

The group promised to meet Inner Circles every week, and on Christmas day via V Live to reveal each other’s secret friend.

“This is not the end. This is the start, everyone,” Seung Yoon declared.

The members decorated a Christmas tree to commemorate the broadcast, which sadly did not survive the 30-minute broadcast. Member Seung Hoon accidentally hit the Christmas tree, causing it to break.

WINNER last came back earlier this year with its first extended play, ‘EXIT: E’. The album also peaked at number one spot in Gaon’s weekly album chart at the time of its release. ‘EXIT: E’ is also Tae Hyun’s last album before taking a hiatus due to anxiety disorder. Tae Hyun ultimately left the group in November.