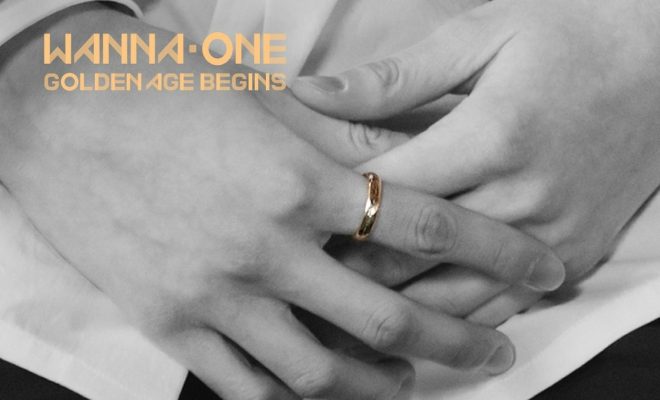 Wanna One To Begin Its “Golden Age” Next Month

Next month is showtime for Wanna One!

South Korean boy group Wanna One is set to make its anticipated comeback next month with a new album.

YMC Entertainment confirmed that the 11-member group has wrapped up filming its music video, and would release a new song and album on March 19.

The boy group heightens the anticipation of its upcoming comeback by uploading another set of teaser images onto its official Twitter account.

In the photos, the members are seen wearing gold rings.

Before the year ended, Wanna One began teasing for the 2018 Wanna One Golden Age Begins with a video uploaded on Naver. On January 4, a version two of the 16-second video was uploaded on the group’s Twitter account.

A month after, a set of teaser images showing the members wearing tattoos was uploaded. In the photos, the words “pot of gold”, “oath”, “stay gold”, among others, were tattooed on the different body parts of the members.

The members of Wanna One debuted in 2017 after successfully competing against other talented trainees in Mnet’s survival reality show Produce 101.

Since its debut, the boy group has attracted much attention and support from domestic and international fans. Its first album 1X1=1 To Be One was sold over 740,000 copies, while its repackaged album 1-1=0 Nothing Without You sales figure hit over 614,000 copies.

Hellokpop, as an independent Korean entertainment news website (without influence from any agency or corporation), we need your support! If you have enjoyed our work, consider to support us with a one-time or recurring donation from as low as US$5 to keep our site going! Donate securely below via Stripe, Paypal, Apple Pay or Google Wallet.
FacebookTwitter
SubscribeGoogleWhatsappPinterestDiggRedditStumbleuponVkWeiboPocketTumblrMailMeneameOdnoklassniki
Related Itemswanna one
← Previous Story MAMAMOO Teases Fans With Silhouette Comeback Poster Of Various Hand Gestures
Next Story → Davichi To Go On A Domestic Tour To Celebrate 10th Anniversary