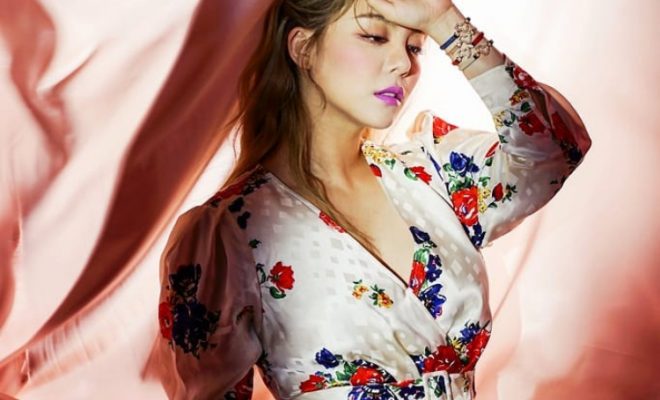 On April 15, the songstress’ agency Rocket 3 Entertainment unveiled several fashionable, striking and vivid images that showcased Ailee’s charm in the most glamorous way.

In the pictorial Ailee stuns as the quintessential beauty she is. She dons a charismatic and bold look to match the equally bright pink toned aesthetic that emanates a fresh, spring vibe.

Ailee answered questions for her fans about her best moments, self love and her inspirations as well as in a quick interview with Hashtag Legend.

The singer hosted a seven-city Korean concert tour “I Am: Re-Born.” When asked about why she chose the particular title she exclaimed, “I chose the title of this tour because it was the first concert that I held with my new company, and I wanted to show a lot of entertaining and different sides of me. I think it turned out to be a great success.”

Ailee further gave an insight that she was working on her new album. However it seems that fans will have to wait for it to come out as she plans to keep the release on hold till she ensures that the album is perfect for her fans.

Additionally she asserted, “I do have so many more genres that I want to touch base with, but we’ll see. Whatever comes my way first, I’ll try it out. If it doesn’t work out, then it doesn’t work out – and if it does, that’s great. I don’t have a certain theme that I want at the moment, though. I’m just trying to gather the right colours for my next album.”

Touching upon the subject of what influenced her music, Ailee revealed that her cultural background was an integral factor that worked out really well when it came to her making music as she feels like a lot of her songs are more melodic for Korean fans. Whereas the influences she got from pop music gives her the edge on her vocal style and that it makes her sound a little more pop than just K-pop.

When asked to choose a favourite from all the tracks she’s released, Ailee revealed,

“Definitely one of the songs on my most recent album Butterfly – the song called “Ain’t That Pretty”. I feel like it described exactly what I was feeling at the moment. It gives me confidence to this day and reminds me to love myself, and hopefully it does that for my other listeners as well.”

Ailee reminisced on some of her best moments when she stated that her proudest moment as an artist was the time when she won all the Best New Artist Awards [in 2012].

Speaking about her role models that serve as inspiration for her music, Ailee credited artists such as Beyoncé, Whitney Houston, Mariah Carey, Alicia Keys and that they are her legends because, “I grew up listening to their music. My music is heavily influenced by them and I’m here today because of them,” she explained.

Ailee’s ultimate goal as an artist is to inspire as many people as she can to be more positive. She hopes that people remember her as “an okay person,” and that she served as somewhat of an inspiration in their lives, as a musician or a person.

She ascribed her fans to be her biggest source of motivation. Ailee voiced her gratitude for the same, she said, “Thank you! I’m always so grateful for all your support and all your protectiveness, and for everything that you do for me to make me happy and to protect my feelings. I’m always thankful for that – I freaking love you guys.”

Ailee had last released her track “Sweater” – a heartwarming yet heart wrenching ballad about remembering a loved one during the holidays. The track released in 2019 which marked her debut in the US market as well.