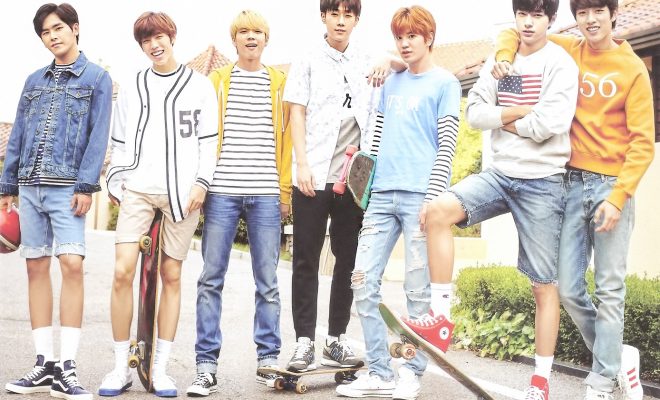 Korean boy group INFINITE gathered together for a short broadcast on V Live to update fans of each member’s activities.

Sungjong, Hoya, L, Dongwoo, Woohyun and Sungyeol joked around, made acrostic poems, and ultimately picked youngest member Sungjong as the subject of teasing in their broadcast.

The youngest member shared that he was enjoying his free time lately. “You post a lot on social media. Why did you write such things,” commented L.

“Are you going through adolescence?” Sungyeol asked. Sungjong defended himself saying that the fans liked it, and he wanted to be a free soul, which resulted to another round of teasing from his group mates.

“I see he’s free but he’s showing off too much,” Dongwoo added.

Upon the arrival of leader Sunggyu, he talked about Sungjong’s recent Instagram post where the youngest member posted with a caption, “Ha! I’m cute!”. “If he keeps posting such stuff, I’m thinking of unfollowing,” he teased.

Hoya chimed in and joked, “Let’s unfollow Sungjong together here.”

The members escalated the teasing by personally checking Sungjong’s Instagram account, reading through his posts and looking into his following tab.

“Fashion designers admitted that I am fashionable,” defended Sungjong.

Despite the teasing and joking, the broadcast ended in a positive note (and maybe a few ‘scars’ in Sungjong’s heart).

“Sungjong is nice,” Dongwoo said before playing with the app’s cute filters

INFINITE ended the broadcast with an acrostic poem of V App, courtesy of L.