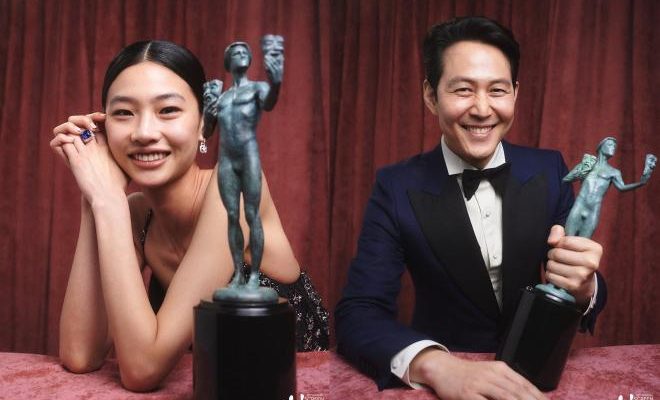 Yet another monumental win for Squid Game, as Jung Ho Yeon and Lee Jung Jae rake in major wins at the SAG Awards.

February 27 marked yet another milestone for the K-Drama giant that is known as Squid Game. Taking the world by storm, thunder, and lightning, the South Korean thriller series became a household name within mere weeks of its premiere. The after-effects of this phenomenon are unending, as Jung Ho Yeon and Lee Jung Jae took home another set of trophies from the SAG Awards.

From red suits and black masks all the way to green tracksuits and dalgona games, the Squid Game effect has proven its longevity.

Even Hollywood has jumped onto the bandwagon (as they should) by recognizing the series, the production team, and the actors for their supreme talent.

Their latest accolades came from the Screen Actors Guild (SAG) Awards. The stars of the night were Jung Ho Yeon, who portrayed the role of Kang Sae Byeok (A.K.A. Player 067); and Lee Jung Jae, who took on the role of Seong Gi Hun (Player 456).

A Double Power Win at the SAG Awards

Lee Jung Jae won an award for Outstanding Performance by a Male Actor in a Drama Series. He was nominated alongside Kieran Culkin, Brian Cox, and Jeremy Strong of Succession and Billy Crudup of “The Morning Show”. HIs heartfelt thanks radiated through the screen, and you can watch his full speech below:

His reaction says it all ♥️ Lee Jung-Jae takes home the Actor® for Outstanding Performance by a Male Actor in a Drama Series! #sagawards pic.twitter.com/efqompdngz

One of Squid Game‘s main muses received a new trophy that night. Jung Ho Yeon won the award for Outstanding Performance by a Female Actor in a Drama Series. Unable to hold back tears of joy, the actress was stunning and misty-eyed while she expressed her gratitude.

The model/actress bested Reese Witherspoon and Jennifer Aniston of The Morning Show, Sarah Snook of Succession, and Elisabeth Moss of The Handmaid’s Tale.

Jung Ho-Yeon receives her first-ever Actor® for Outstanding Performance by a Female Actor in a Drama Series for her role in #SquidGame #sagawards pic.twitter.com/PJAHCavDni

Congratulations and to more awards in the future!