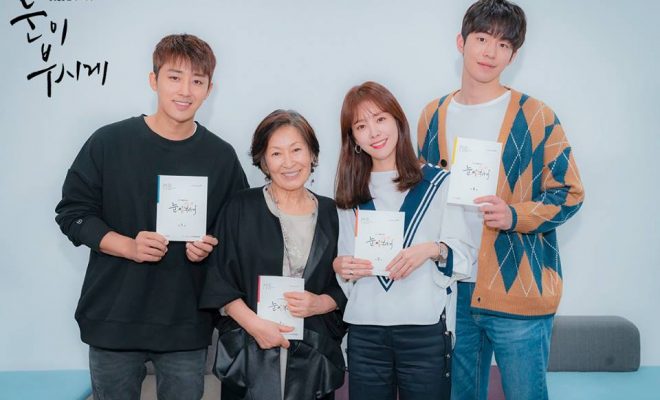 jTBC’s new drama, The Light In Your Eyes (tentative title), held its first script reading in November. The new time-traveling fantasy drama will be broadcast in January.

Crew members witnessed that the actors’ performances boosted anticipation for the cast’ amazing synergy. The time-slip fantasy romance tells the story of two women who are living in the same time but at different times.

Han takes the role of a bright and ambitious announcer who magically transforms into a 70-year old version of Kim Hye Ja. The elder Hye Ja will be played by veteran actress Kim Hye Ja. She will have the ability to turn back time but will be trapped in the current time.

While on the table-read, the blending of the actresses performances were perfect right off the bat. Kim and Han, who had to delicately carried on the sentiments of their characters, thoroughly checked each other’s dialogue throughout the reading of the script.

The seasoned actress, who will debut for the first time in a fantasy romance, predicted that this will be her breakthrough role. Albeit challenging, the role of a 70 year old woman who has the soul of a 24 year old, she is determined to challenge herself.

She has added a deep sense of youth to the role, having had to learn mannerisms and actions of a young woman. Armed with a distinctive loveliness, the actress has paid tribute to her co-star Nam Joo Hyuk for his extraordinary acting.

Han Ji Min also showed a charming act as the brilliant announcer Kim Hye ja. Her realistic and detailed performance has gained the admiration from the staff and her co-stars. Showing her limitless ability to perform well across different genres, the actress bagged the Best Actress honor in the 39th Blue Dragon Awards for her movie Miss Baek.

Lauded for the perfect visuals, Nam Joo Hyun is expected to deliver another stellar performance as the ambitious Lee Joon Ha. His character has missed a lot of opportunities in his life and is currently struggling with a helpless life.

Nam Joo Hyuk has recently won several rising actor awards for his role in The Great Battle.  He has widened his acting spectrum in various works, and showed a calm yet deeper acting during the script reading. He describes his character as someone who tries to be perfect, but harbors a deep pain inside.

The drama is expected to be a dazzling combination of stellar acting, a great story line and great chemistry between the cast.

The Light In Your Eyes will be broadcast on jTBC in the first half of 2019.