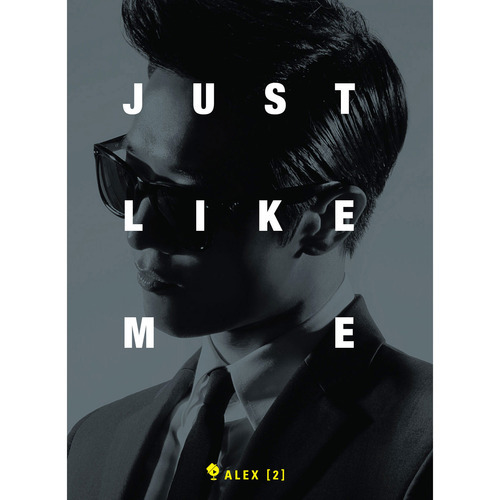 When artists go from being in a group to releasing solo, some choose to pursue more or less the same musical style that they used to pursue in the group. Others choose to put the old stuff through a shredder and start over. Clazziquai Project vocalist Alex leans closer to the latter–while he does employ a bit of the house and electronica styles that Clazziquai helped pioneer years ago, his solo work has primarily been easy-listening pop and ballad that stray pretty far from the Project’s music. This approach was a commercially successful gambit, and boosted Alex’s clout to the point where he was able to take over the primary vocal role from Horan in Clazziquai’s latest full-length studio release, Mucho Punk.

Surprising no one, Alex’s second studio album Just Like Me doesn’t try to fix what ain’t broke. The album is filled with more of what made My Vintage Romance a popular debut: gentle, ambient sounds accompanying romantic themes and tender sensibilities. Pop ballads make up the bulk of the running time, with somewhat more traditional ballads and a little electronica rounding out the rest. Alex’s trademark soft vocals are as frail as ever, and goes easy on the ears.

The bad news is, Just Like Me ends up being pretty bland as a result. A fairly diverse array of composers contributed to the album, but roughly 80% of the ballads here still lack impact. Ambient ballad 같은 꿈 (Same Dream) is essentially a re-skinned version of Kim Dong-Ryul‘s 아이처럼 (Like a Child), but doesn’t evoke the same kind of warmth and comfort that the original does; the austere 자신에게도 축복받지 못한 (Not Even Blessed By Herself) is profoundly written, but ultimately comes off as flat on the delivery; 봄날의 바람 같아요 (Like a Spring Breeze) plays it much too safe and ends up dragging. These and the other ballads aren’t necessarily bad–they have their moments, and more than anything they’re calm, thoughtful love songs that deserve credit. But they are overwhelmingly forgettable, and that’s an issue when these make up most of the album.

Fortunately, a few diverse tracks stand out and rescue the album. Lead single 미쳐보려 해도 (Can’t Be Crazy) stands heads and shoulders above the rest: the hybrid pop number defines itself with a ponderous yet nonchalant electric-piano loop, before slowly shedding the chic and expanding into a grandiose chorus. It’s put together masterfully, and does some relatively unusual things with pacing and instrumentation that I’d like to see more of in the future. Tomboi shakes up the tempo with a funk-charged beat–it’s probably the most Clazziquai-esque track found in Just Like Me, and the change of mood is extremely welcome by this far back in the album. Fluxus Music‘s newest artist, Lovey, also debuts in this track, and her attitude-laden, conversational rapping (somewhat reminiscent of E.via) makes Tomboi come alive more than what Alex is able to do by himself. Hymn-like rock ballad 전하지 못한 이야기 (A Story Untold) and jazz-leaning You’re My Lady are also effective in giving the album some much-needed variety.

One gets the impression that all of this is unnecessarily difficult, however. In any other album, this amount of variation would sound perfectly fine, and the album would feel balanced. So why does the bulk of Just Like Me still sound bland and repetitive? I think the primary reason is Alex’s vocals. He’s not a bad singer, of course, but his extremely limited vocal color has been a point of note for a few years now. It’s similar to the criticisms raised against 2NE1‘s Park Bom by some listeners. Alex sounds great when singing in a style and genre that his voice fits into, but there really aren’t many such styles and genres. Going one step further, Alex’s perennially gentle, effortless singing (and more specifically, his unwillingness and/or inability to change that up) has the effect of making everything sound similar in Just Like Me. This is the central issue inherent in these ballads.

Further confounding the problem, Alex’s performance misses cues that could have improved some tracks: as mentioned earlier, Not Even Blessed by Herself loses points on the delivery, as the singer has a hard time sufficiently expressing the song’s solitude and profound sorrow. You’re My Lady could have been done with a lot more personality and shifts in tone, but Alex is a little too consistent throughout and kills some of the track’s vibrancy. Sounding tender and romantic isn’t everything–the problems in Mucho Punk have carried over to the solo album.

Even well-made pop gets blasé in no time without something to keep things fresh. Just Like Me is an unfortunate example of that notion. It’s clearly a result of tons of hard work and dedication: Alex and his composers gave a good effort towards diversifying the ballads and expanding the album’s scope. But the end result is only a polished, “good enough” piece of work that stops short of being memorable. If Alex’s intention was only to release another fan-minded collection of soft ballads, fantastic. He’s achieved it. But if he wants to establish himself as a solo artist, he’s going to have to change something fundamentally.