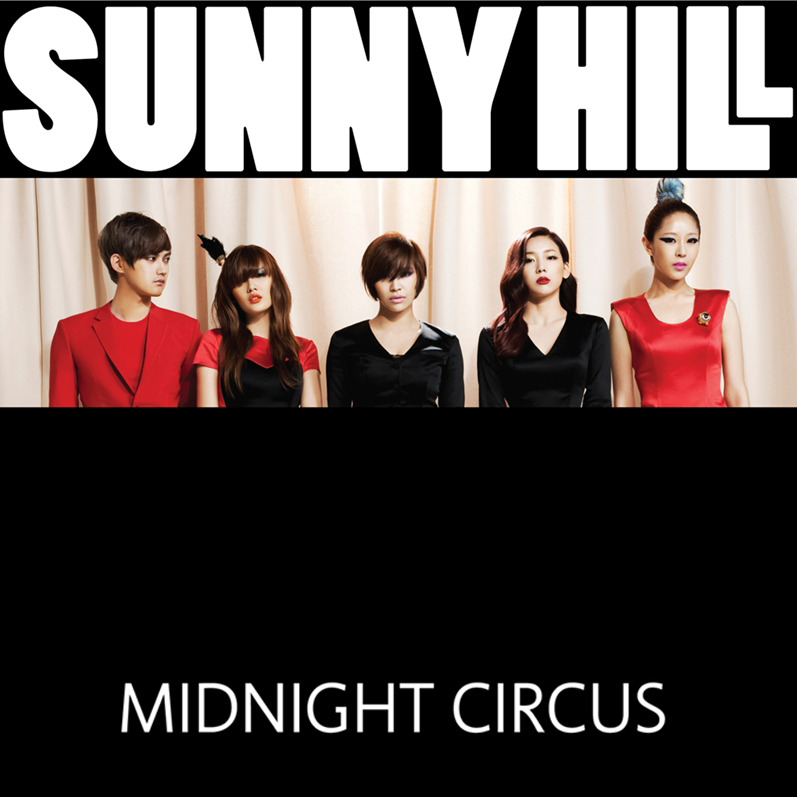 This isn’t the same Sunny Hill that you know. Actually, “don’t know” might be more appropriate there: after a quiet debut under the Nega Network label in 2007 as a one-guy-two-girls trio, this coed group released a few really great but totally unnoticed singles through 2009 before disappearing, leaving behind a very small group of disappointed fans. So it’s not only understandable, but rather expected, that you haven’t heard of them before. However, the group was poached by Loen Entertainment during the recent successful partnership between Nega and Loen, and made a surprise return appearance in Narsha‘s 2010 solo track Mamma Mia. And earlier this month, they returned with two additional female members and a new EP, Midnight Circus. That’s a long-winded summary, but back to what I was saying: this is a different Sunny Hill.

This Sunny Hill is a bit more eager to get with the trends, eschewing R&B ballad and soul in favor of electronica and dance pop. They now have choreography to go along with their music. The new Sunny Hill is theatrical and loves the spotlight. It’s a total thematic makeover, Brown Eyed Girls-style. (That group, incidentally, happens to be Nega Network’s flagship at the moment.) Speaking of themes, that’s a good spot to start talking about Midnight Circus. This EP is probably one of the most obviously theme-oriented albums I’ve listened to. Everything about it–instrumentation, lyrics, mood–complements and builds toward the concept of a darkly uncanny virtual circus. I don’t know what the inspiration was, but at any rate it’s a welcome approach: focusing an album like this often results in more thoughtful, purposeful product as a whole, and Lord knows there are already too many thoughtlessly compiled albums these days.

The idea of turning dance music into something that veils a darker theme is good. And so is Sunny Hill, at maintaining the façade. Intro track Girl With A Accordion (no, that’s not a typo; the track says A) kicks things off with an accordion-and-snare melody that crescendos and speeds up in uneasy manner. Sound bites of slapstick comedy and a crowd’s intermittent laughter are imagination-feeding touches. The next track is titled 꼭두각시 (Puppet); it’s a relatively standard pop ballad for the most part, featuring a moody piano-and-synthesizer beat. The melancholy, desolate tone feels similar to Baek Ji-Young‘s Lost Star, reviewed recently; this one is somewhat more melodramatic, but Sunny Hill’s seasoned vocalists are good enough to rescue the track. The hints of madness between the longing verses and falsetto choruses, combined with the incessant theater and drama metaphors, play right into the circus theme and make for an almost psychedelic four minutes. (As an aside, it deserves mention that this is the EP’s only track where Jang Hyun, the one male member of this group, gets to sing; it probably helped that Jang composed, wrote, and arranged the song. We could guess the reasons for Jang being snubbed throughout the rest of the album, but I won’t do that here.)

Lead single Midnight Circus is where things get a little problematic. Before I go on, yes, I know that this one’s been well-received by a ton of people since release. If anything, I think Midnight Circus is a very polarizing track, and people will either love it or hate it. Now, the track is clearly meant to be the crowning jewel of the EP. Aside from being promoted as the lead single, it’s by far the most theatrical and grandiose song out of the bunch. The use of real-session band for instrumentation is always refreshing, and the inclusion of everything from playful piano to bouncy brass to embellishing snare doubly so. The melody jumps between brash and emotional, and is pleasantly engaging the whole time; in the meantime, there’s a lot of contrasting themes going on here. Most notably, a more subtle melancholy underlies the flashy, almost flippant feel on the song’s surface, and the track does capture that interpretation of the circus well.

The problem is that Midnight Circus takes itself way too seriously, when it actually has very little substance to justify it. It might be a deeper song than most other dance pop, but it’s not nearly as poignant as it’s thought out to be. An unfortunately large portion of Midnight Circus is seriousness for the sake of seriousness: the lyrics sound meaningful, and they are to a degree, but their message is drowned out by the faux-pas allegorical imagery and melodrama. The Agatha Christie allusion near the end (“And then there were none // In that illuminated place”) is a particular example of lyricist Kim Yi-Na (who also wrote IU‘s 나만 몰랐던 이야기 (A Story Only I Didn’t Know)) trying a little too hard. It feels as if the song is screaming “LOOK AT THIS LYRIC! ISN’T IT PROFOUND?” the whole time instead of actually conveying a meaningful message.

Soundwise, the backmasking technique used in the bridge sounds cool, but doesn’t really add anything to the track. And while the instrumentation and individual performances are outstanding (the girls use the song as an opportunity to show off a delightful variety of vocal styles), I don’t think Midnight Circus does a very good job of tying the track’s contrasting elements together–in other words, of portraying the duality that this “midnight circus” is supposed to inherently have. There’s still too much chaotic dichotomy within the song that does not connect, and so it feels incomplete. I’d have liked Midnight Circus better if it had either dropped the light-hearted elements completely or go all-out with the contrasts and portray something like a descent into madness. Either option would have been more genuine and impactful. As it is, this track is rich on the ear candy and has some depth, but stops short of being truly great. I’d recommend it with reservations.

The group makes up for it with Let’s Talk About, however. It’s an uptempo europop-hiphop hybrid that is a modal departure from the rest of the EP, but that’s not what’s important: as much as lyrics hurt Midnight Circus, they bless Let’s Talk About. Simply put, this track has the bluntest, most vicious lyrics in recent memory. The group’s two new members, Misung and Kota, wrote the song, and boy, do they have an attitude: Sunny Hill acutely criticizes and makes fun of vain men, indecent objectification, girl groups (yep, they went there), and more with conversational condescension, dripping sarcasm, and hilarious parody. While the rapping isn’t overly impressive technically, the clever and sometimes dangerously aggressive wordplay steal the show anyway.

One stanza opens with “I’ll take it off if you want, sir” and specifically mentions the controversial spread-leg dance and the “missing pants” look.  Later, they implicitly call members of some girl groups “girl-ae“, which just means “young girl”; but this is a play on “gurl-ae“, meaning “rag”, which is used as a slang word similar to “slut”. This is just one example of what Let’s Talk About is chock full of. But even apart from the contents, the track has a lot of interesting tidbits and touches to go along with the excellent arrangement–in one twist, ballad artist Zia pops in and sings a chorus that combines lyrics from her own songs, and the message fits in perfectly with the track’s actual chorus. I think Let’s Talk About is brilliant and shows the kind of unapologetic creativity artists need these days. That doesn’t mean this track is going to get any airplay: in fact, I wouldn’t be surprised if it gets a parental advisory rating sometime soon, with these lyrics. The stuff would be right at home in a Psy album.

Throughout all these tracks, I can’t help but think that Midnight Circus makes Sunny Hill look and sound like a Brown Eyed Girls clone. Not only have the two groups had a similar shift in musical identity, but I could see B.E.G. perform the title track or even Let’s Talk About and achieve essentially the same result, and in many ways this EP benchmarks the style of that elder group. If artists themselves chose to do this, then it’s a questionable decision. But if Loen is having them pursue the B.E.G. path, that’s just unfair to Sunny Hill. These artists are clearly capable of being independent musically, and it’d be a shame to see that stifled.

Where does that leave Midnight Circus as an album, then? It’s certainly a more complex EP than your usual five-track effort. I think Sunny Hill definitely gained some dimensionality out of it, and I’m actually feeling pretty good about this album despite the shortcomings of the title track. It shows enough promise, enough evidence that Sunny Hill knows what it’s doing and will be going places. Whether good or bad, certain albums are more fun to review than others; suffice it to say that I had an absolute blast with Midnight Circus.