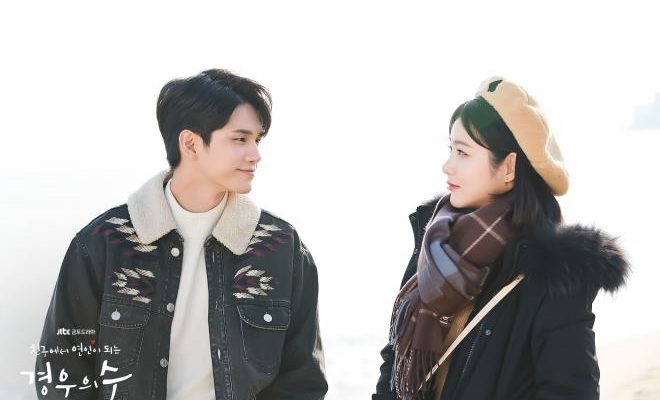 K-Drama Review: More Than Friends Affirms How Despite The Tears, Experiencing Love Is Life’s Greatest Bliss

One of the best written Korean dramas this year, More Than Friends has taken its viewers to stages of love that are equal parts blissful and painful – but ultimately the sweetest in between.

It’s interesting to note that More Than Friends is that one drama with such harrowing problems, yet there is not even one single villain present in the story. Remarkably conceived with an amazing cast who owned their roles to the hilt, this series evidently is one of my top drama picks this season.

No one has prepared us to the complicated yet addictive love journey of Woo-yeon and Lee Soo. They brought us to harrowing moments in their love confrontation scenes. After that, they took us to a religious congregation event to support their love to prosper through united prayers.

Undoubtedly not the perfect love we all want to have, but realistically it gave us a nagging imprint on why we cannot give up on love. Albeit the emotional strain and uncertainty, there’s just a kind of love special to someone’s heart.

Just like Woo-yeon and Lee Soo, who became each other’s unrequited and true love, the drama traverses on love problems often overlooked. I think that’s my biggest takeaway from the love pairing’s romantic drive.

We can never win on how convincing Lee Woo and Woo-yeon are in their love arguments. They kept us under their spell in understanding their perspectives and emotions equally.

Woo-yeon was probably the most emotionally problematic female lead in K-Dramaland this season, but we love her just the same. She has captured the real sentiment of a woman in love, bound to the possibilities of being swayed by her insecurities, yet knows how to own the love moment she earned rightfully. 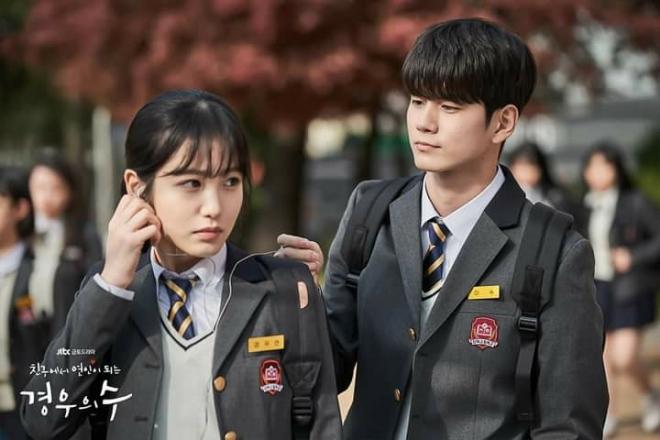 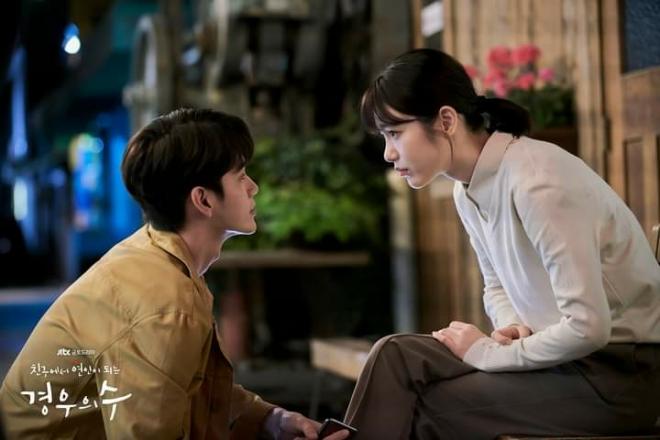 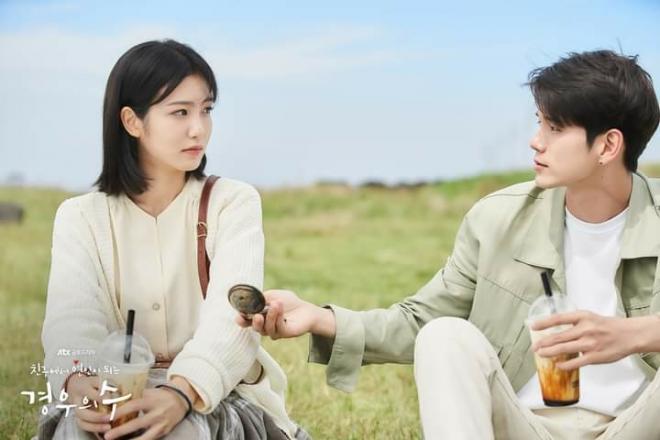 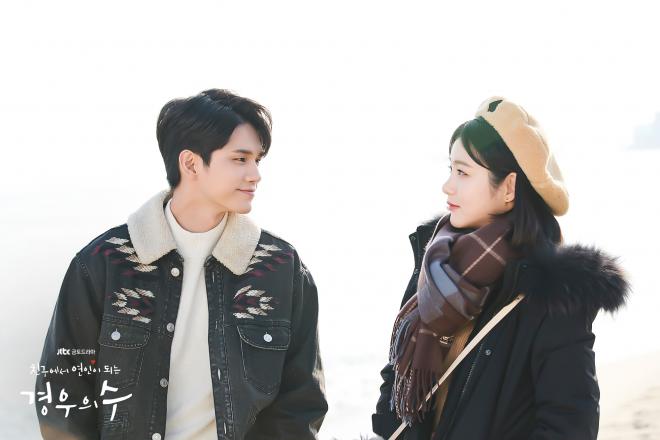 As a staple story genre in K-Dramaland, romance stories evidently struggle to cause a prolonged aftermath in the recent years. For a romance series to achieve a “recall”, it has to either hit a consistent engrossing narrative by banking on captivating portrayals and stunning screenplay.

That surprisingly was achieved by More Than Friends and with a rookie writer, it is deemed more impressive. More so, K-Drama narratives are typically trite. With the same groundwork, the writing capitalized on the unpredictability of the love quests to be hurdled in the featured main and side love stories.

Among the many heartfelt love lessons featured in the series were pragmatic situations that anyone who fell in love can relate to. Like how “timing plays an important role in a relationship”. Timing in the sense of acting accordingly what needs to be done right there and then, when you want to keep the relationship going.

Apart from that, how the career and economic status connecting to any romantic journey, also shaped as lingering nudge in the series. That palpable feeling of being never enough for someone with better life than you have is a truth universally acknowledged. It was specifically pictured in the point of views depicted in the relationships of Young-hee and Hyun-jae as well as Sang-hyuk and Jin-ju.

There was a point when I felt the writer was taking more time than necessary to the circling love fulfilment of these two pairs. But then I realized later, the weight of their imaginary world situations cannot even compare to how we it translates to real life. 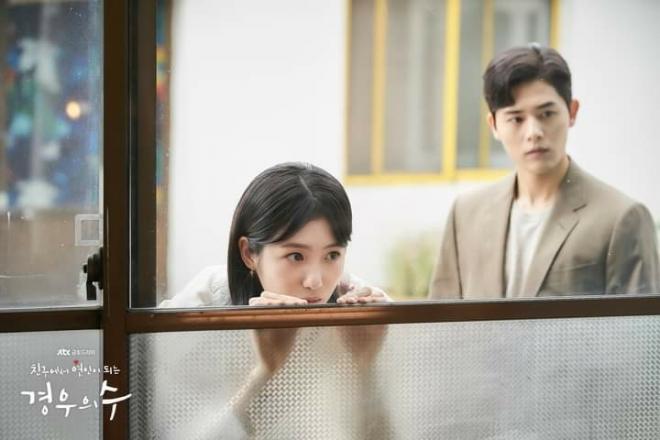 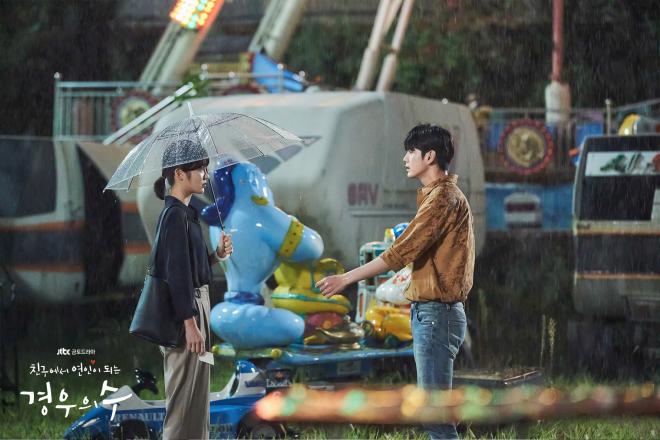 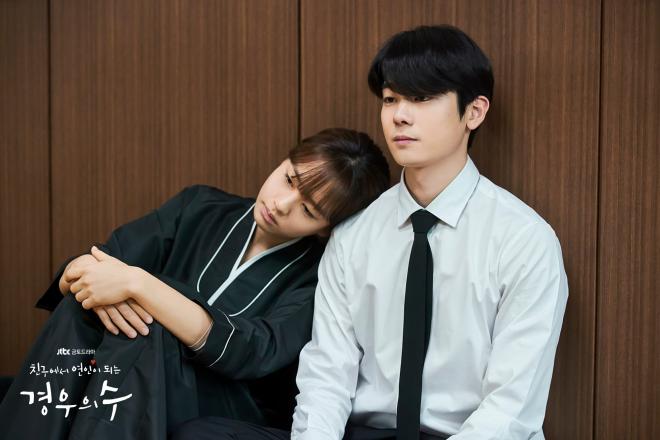 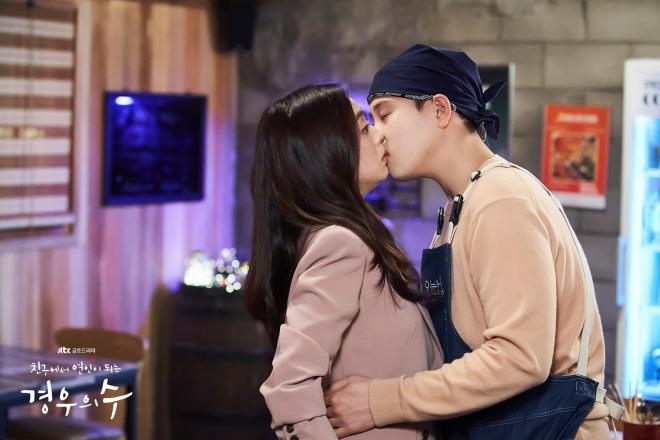 More Than Friends gifted beautiful, but agonizing moments made more stunning with its screenplay. It displayed a satisfying picture of a love triangle interestingly, because of how the three people involved do not make sense sometimes. Then, they gave a convincing pitch of why the love was worth it for all of them.

For the most part of the series, I took Woo-yeon’s love problem in my real life because of how invested I was in the equally amazing portrayals of the male leads.

Both presented the two kinds of boyfriend a woman would be blessed to have at different times of her life. It’s a pity that Woo-yeon had to pick only one. Her choice conveys one of the many love lessons paraded in the series. That love has to be mutually felt, bravely committed to and earnestly claimed without regrets. 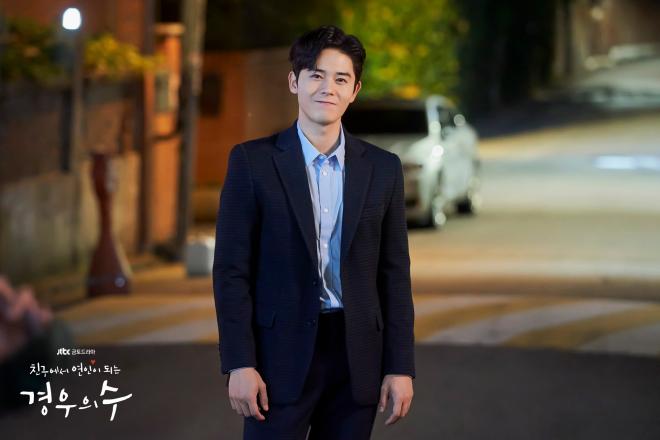 Joon-soo, who viewers would definitely love in the story, made us root for his own happiness. We will always remember him for being one of the best second male leads this K-Drama season.

He painted his character with such unforgettable frosting we thought would never be possible. That is because his character is usually designed to impossible love scenario that induces hate.

However, his role has truly bring out the best of the love triangle setting since we root for his love, even if it is futile, because he has presented his perspective convincingly. 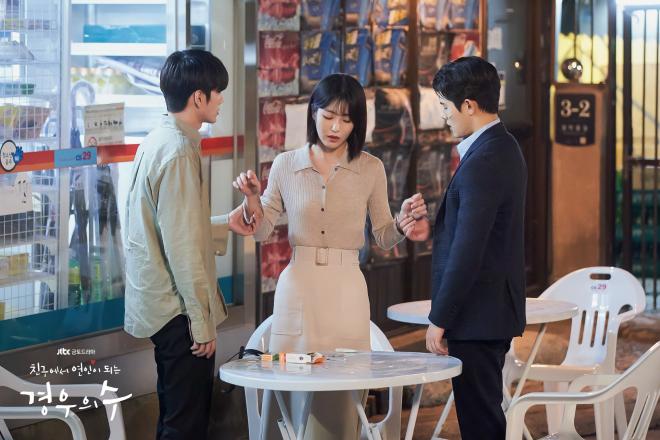 Featuring fables, book passages and other literary references, More Than Friends is a treasure trove of beautiful drama quotes. From the love confrontations, life realities, individual breakdowns; this drama is filled with consoling life and love lessons.

While the bulk of the sentiments is being carried by Woo-yeon, the catalyst to that was how Lee Soo failed to respond to her emotions in all those times he could have.

Misunderstandings in Korean dramas are really scary. In More Than Friends, it was extra scary because the characters tend to have a mindset that refuses to ask and say the right things at the right time. *chuckles

Surely banking on its confrontation scenes, this drama queues Lady Mishil’s background music literally whenever Woo-yeon and Lee Soo argue with their emotions. I think a lot of us watching subconsciously, cheer for them while they raise their arguments. We even resigned to the key points that make sense in their own perspectives that we cannot refute.

Check out the memorable lines I collated in the feature below. 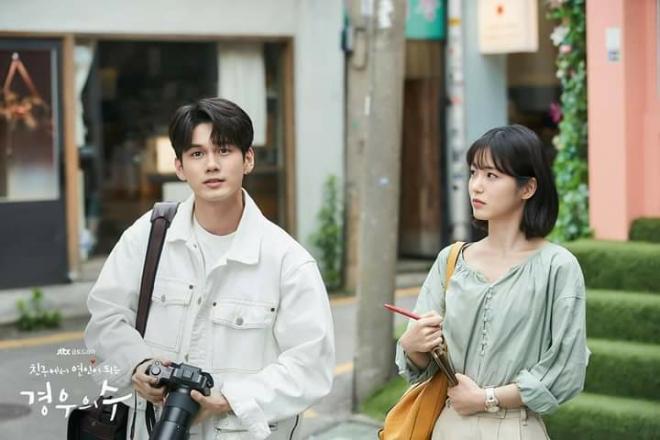 Shin Ye Eun has really captured the girl who could be us – or someone you know, who just keeps going back to her first love. With such distinctly pictured male leads portrayed in stellar flair by Ong Seong Wu and Kim Dong Jun; More Than Friends has never looked back when it carved its phenomenal romance story.

Notably, it consistently highlighted how the female lead confronted her conflicted emotions. Simultaneously, she traversed a new-found “ideal” love – while fighting not to get confused again, by the one-sided love she harbored for 10 years.

Even though it was not imaginatively conceived or deftly directed, the narrative and portrayals have so much heart reminiscent of my other all-time favorites. Nothing flashy, nothing grand – its pure and heartfelt storytelling pushed me to a prolonged rave for its resonating simplicity.

Its cliff-hanging twists were not mind-blowing, but totally pierces to anyone, who has experienced the same love confusing scenario in the series. 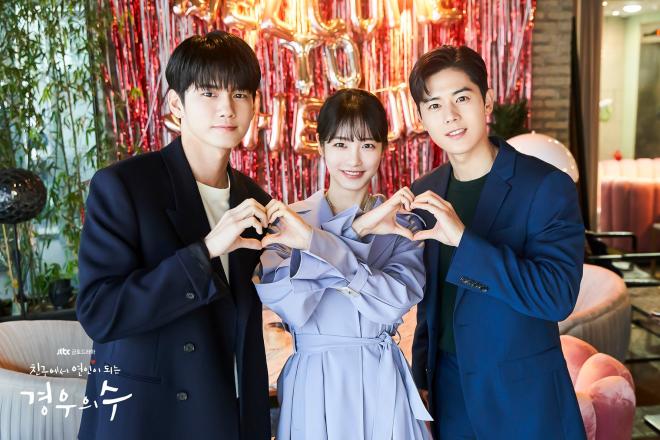 Since the first episode of More Than Friends, we had joined Woo-yeon in her on-and-off love fixation on Lee Soo. We admired her bravery, got tired on her indecisiveness. Same way on how we hated Lee Soo, but supported him all the way when we felt his genuine love needs to be gratified only with Woo-yeon.

Delving on the idea of how efforts can open a door to a love, Woo-yeon, although not completely claiming the courage to move past the knots in her hearts, at least knew how to be firm with her decision to not be in a bad relationship.

We saw her going through an array of emotions, some meaningful, but most of the time circling and half-hearted. Taking a break to sort her feelings though seemed to have led to what her heart really wanted. Her heart which seemed to be beating for only one person.

Her nature has been consistent since day 1. Instinctively drawn to an inescapable love fate, we saw her at least learned how to value herself more.

That poignant scene when she came clean to Joon-soo, that she cannot un-love him reflects her growth. Indeed, her character was hard to tackle owing to how she was pictured to have glorified the idea of first love. So much to the point that it could have self-destructed her if not for Joon-soo.

Whoever the writer of More Than Friends is – he/she really did a great job on its stunning storytelling.

The superb screenplay has taken us to the highs and lows of unrequited love, that lost its footing because of bad timing and misunderstanding. Yet, it still went back to how love is truly felt in reality – accepting pain because love is never a pure kind of bliss. 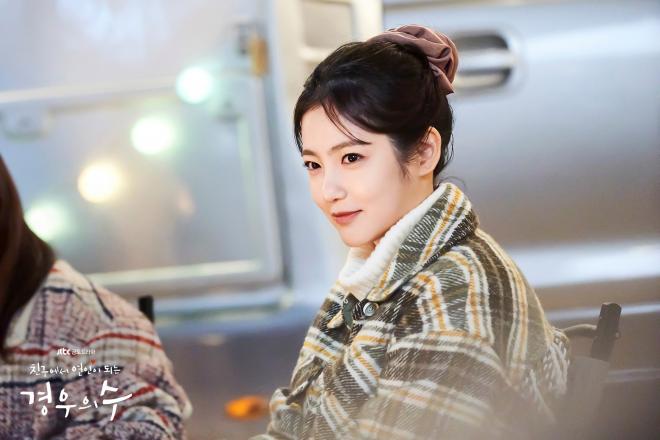 More Than Friends flowed to the kind of love story where romance and friendship were equally served. That has been one of those things this series gifted us. It did not go to impossible lengths and harrowing love problems.

All the three pictures of love presented in the series describe the kind of love where memories and being there for each other matter.

Come to think of it, the three girls have been tackling the same problem from day 1. Woo-yeon tackled a love that is hard to move on; Young-hee kept going back and forth whether she will get married or not; and Jin-ju just want to have boyfriend.

Such typical problems that all women can relate and have gone through the course of their lives. Thus, making More Than Friends such a consoling and familiar watch. 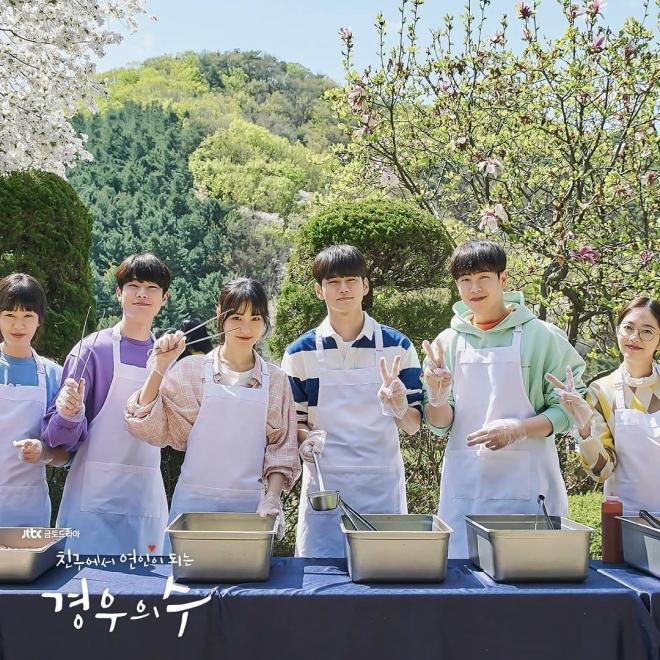 Why you should watch More Than Friends?

More Than Friends pictured characters we know and might be who we’ve been when we fell in love at some point in our lives. Those times when we can’t process our emotions well. Those times when we were unreasonable and kept clinging to the idea of love when it is just hurting us in the process.

While Woo-yeon’s situation of being torn between two lovers was not something new in K-Dramaland, it drew an interesting flavor. Because she was a reminder of a woman’s most memorable love phase. The kind that is beautiful, confusing, and painful but worth fighting for. Those are the blessings of love she received from Lee Soo and Joon-soo.

More Than Friends is globally streamed on Netflix, Viu and iQIYI. 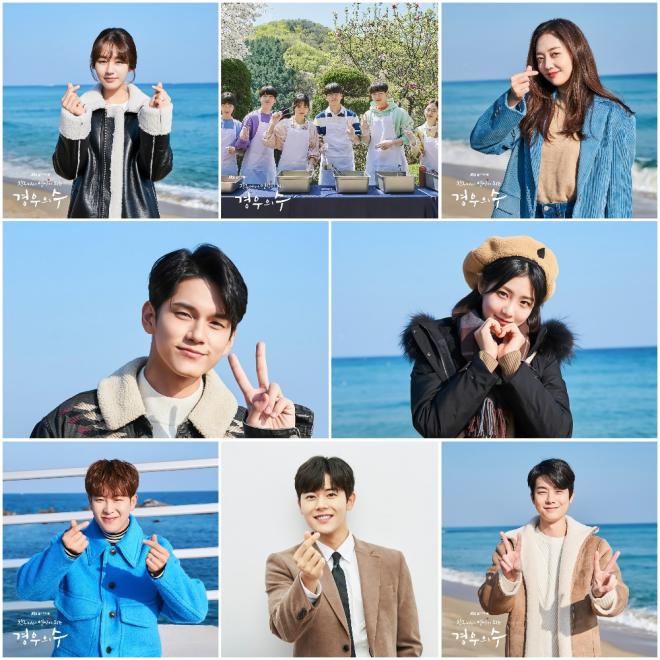 More Than Friends Photo Gallery below.