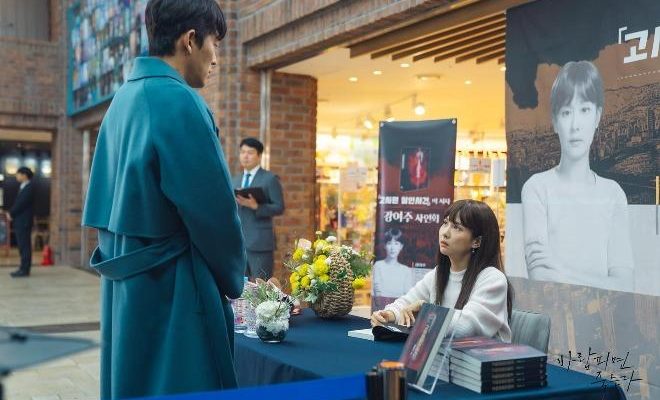 K-Drama Premiere: “Cheat On Me If You Can” Intrigues With Devious Characters and Interesting Plot

Life just got complicated for Han Woo Sung as his indiscretions are coming to haunt him, threatening his marriage and political dream.

Cheat On Me If You Can treated its viewers with charismatic characters and an engaging narrative on its premiere week. There is a cheating husband with a political ambition, a writer with a murderous tendency, a suspicious assistant and a missing celebrity. Add in a story laced with dark humor and you get a drama worth watching. 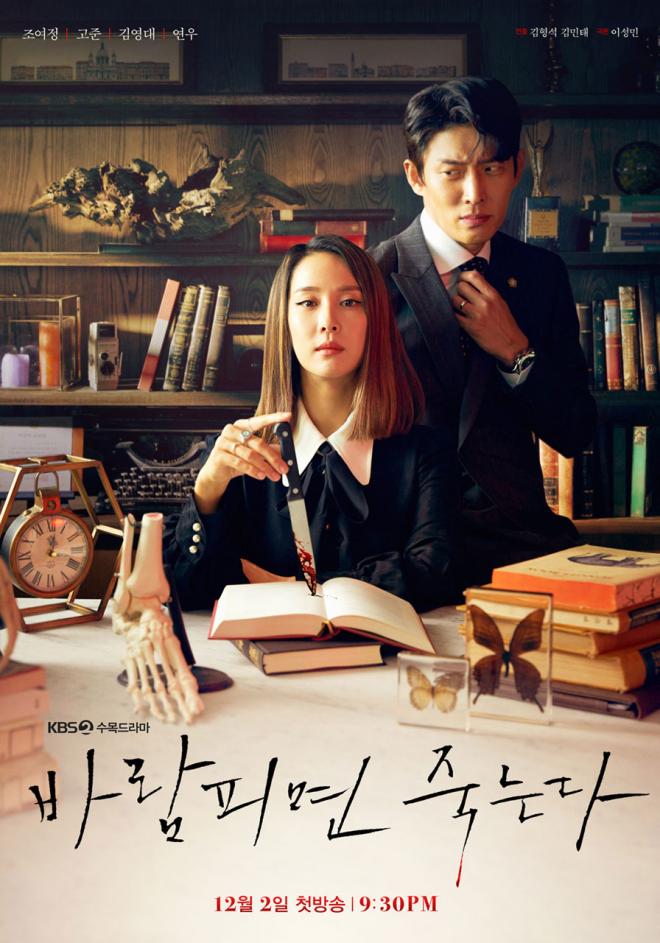 Cho Yeo Jeong and Go Joon enthrall in this comedy thriller. Both actors portrayed their respective characters on point that you can’t help but love, hate and be suspicious of them, all at the same time.

Cheat On Me If You Can Pilot Week Recap

Han Woo Sung (Goo Joon) takes a homeless man to a hospital and as a result he almost misses his TV show guesting. Host Baek Soo Jung asks Woo Sung about his work as a divorce lawyer and how he takes on pro bono cases for women. Woo Sung tells her that he likes to help women whose husbands were unfaithful. 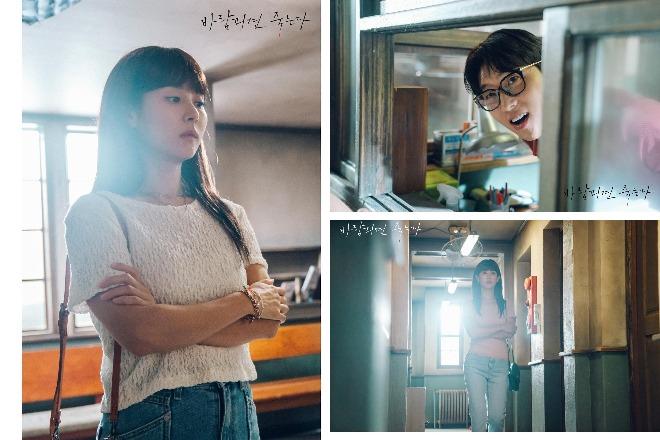 Soo Jung says that he is known to be a devoted husband and asks about how he met his wife, Kang Yeo Joo (Cho Yeo Joo). Woo Sung recounts that they met at a goshiwon when he was preparing for his bar exam and standing in for his friend who worked there. He narrates that Yeo Joo asked for the creepiest room there was. Woo Sung made up some story for one of the rooms and Yeo Joo stayed there to write her novel. During the fan signing event for the book, Woo Sung attended and bravely asked for Yeo Joo’s number.

Woo Sung tells Soo Jung that he loves his wife dearly. After the interview, Soo Jung shows interest in Woo Sung, asking him out to breakfast, lunch and dinner. He rebuffs her gently saying that he already has plans. 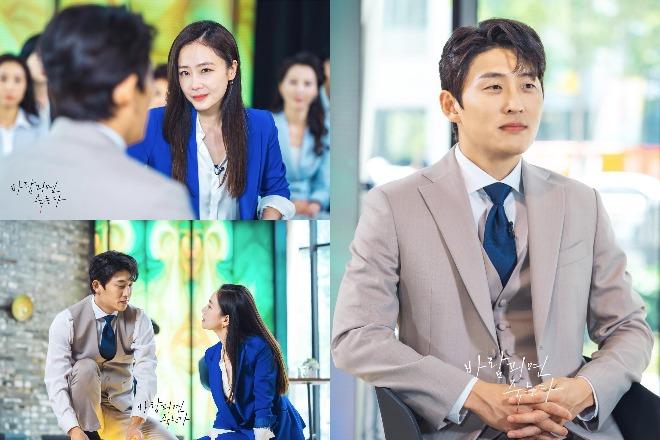 After the TV show interview, Han Woo Sung rushes to the grocery store to “buy necessities and meet his wife”. However, it is all a lie as he has been seeing women behind Yeo Joo’s back. He is very careful and uses his morning jog routine as well as his grocery shopping time as a way to meet Baek Soo Jung (Hong Soo Hyun) and Lawyer Park. He even has a bathroom essentials kit he uses so Yeo Joo won’t suspect as she is very sensitive to smells.

Back in their house, Kang Yeo Joo’s housekeeper tells her that Ms. Yang is visiting her. She makes her escape and goes to the nearest convenience store. However, the young man tending the store eventually reveals her location and Ms. Yang, Yeo Joo’s publisher, forces her to attend an event for her books. 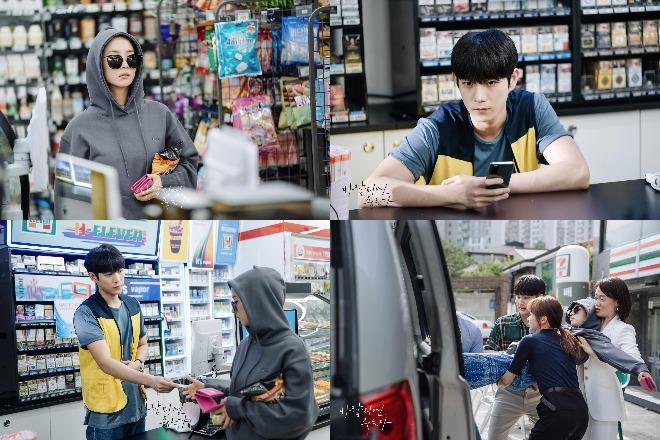 At the event venue, protesters barge in and demand a statement of apology from Yeo Joo. Some throw eggs at her but Cha Soo Hoo (Kim Young Dae), the part-timer at the convenience store, saves her and takes her away. That night, Woo Sung returns home to find his wife cooking and he becomes suspicious. He even gets anxious when he notices his shirt has a lipstick mark. Yeo Joo comes into their room asks for it but before she finds out the mark, he manages to distract her. He gives her a clean shirt and passes it off as the one he was wearing earlier. After taking a shower he meets her in the kitchen where Yeo Joo tells her they are having a visitor. Much to his surprise, the person joining them for dinner is Baek Soo Jung. 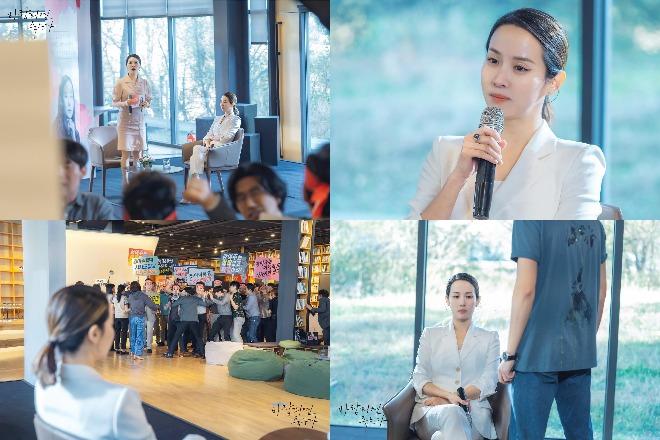 The disappearance of Baek Soo Jung

All throughout the dinner, Woo Sung tries everything he can to prevent Yeo Joo and Soo Jung to have an alone time. While Yeo Joo goes to the basement to get a bottle of wine, Woo Sung reiterates that their relationship is over. However, Soo Jung refuses and hints that she may spill their affair if she gets too drunk. She says that she is willing to leave as long as he promises to meet her on the same place at the same time.

Feeling cornered, Woo Sung agrees and as Yeo Joo returns, Baek Soo Jung tells her she is taking her leave. That night Woo Sung wakes from a nightmare and finds Yeo Joo is not on their bed. He goes out of their room and catches a glimpse of her in the den, talking to someone on her phone. 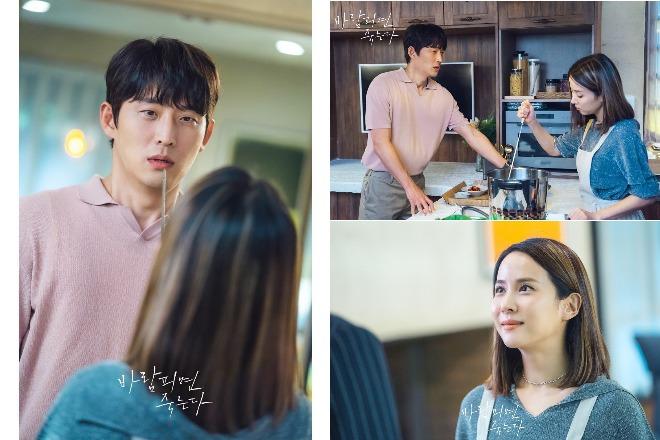 The following morning Woo Sung goes to meet Soo Jung, but she is not in her studio. He later finds out that she is also not present in her show, which angers the Producer. Though he wonders what happened to Soo Jung, Woo Sung is quite content that he manages to dodge a bullet.

Arriving at their house, Woo Sung wonders Yeo Joo’s whereabouts. He checks around and in one of the rooms, he finds the printer running. Upon checking, he gets surprised upon seeing copies of the waiver he signed in order to marry Kang Yeo Joo. The document states that if ever Han Woo Sung cheats on Kang Yeo Joo, he deserves a death sentence, fully surrendering his body to Yeo Joo. He feels anxious once again thinking that perhaps his wife knows about his affairs. He later finds out that she is inspired by it and will incorporate it in her next work. 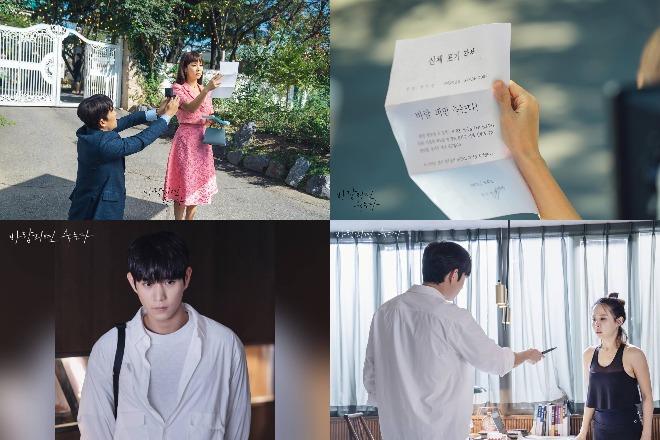 In preparation for her upcoming novel and after getting an idea from Woo Sung’s waiver, Yeo Joo advertises for an assistant. Soo Ho, the convenience store part-timer applies for the job. Ms. Kang is quite hesitant at first but eventually gives him the job. Yeo Joo agrees but bluntly tells him that she does not fully trust him as she finds a lot of inconsistencies about his story. As it turns out, Soo Ho is not really who he says he is.

The College Student and that “thing” in the freezer

Nam Ki Ryong, Han Woo Sung’s image consultant and adviser books a speaking engagement for him in a University. On his way to the venue, he almost runs over one of the student. The woman makes Woo Sung speechless with her simple yet captivating beauty. Unable to locate the building he is supposed to go to, the same student leads him to the right location.

Finding to the young student distracting, Woo Sung tries his best to ignore her during his talk, to the point he refuses to acknowledge her. When she raises her hand to ask a question, Han Woo Sung quickly wraps the session and bids the students goodbye. In his haste to leave, he drops his pen without even noticing it. 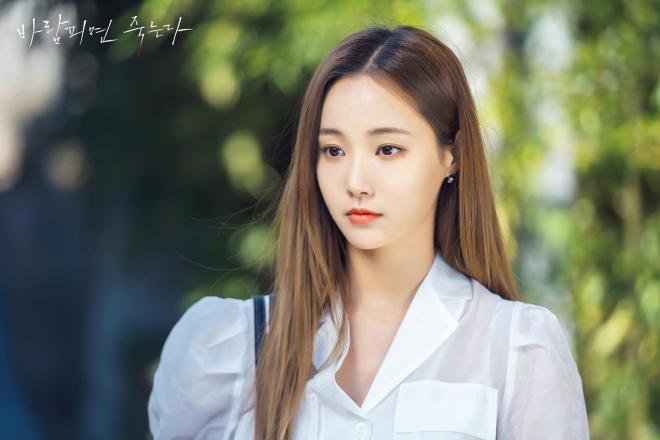 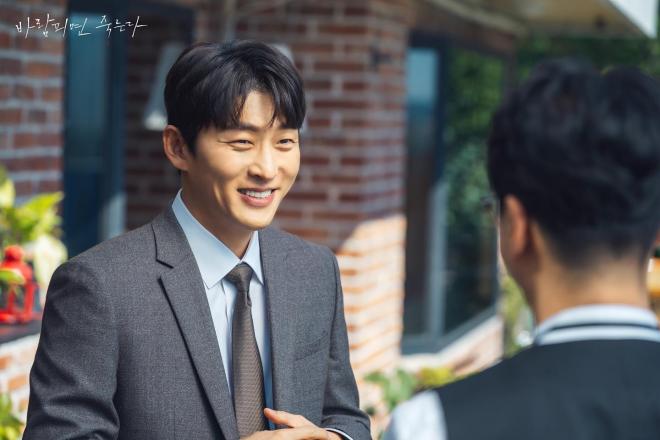 That night while drinking with Son Jin Ho, his best friend and paralegal, he vows he will change his ways. This is in preparation for his attempt to run for office as an assemblyman. He even tells him that he will no longer engage in extra-marital affairs. While waiting for his ride, he crosses paths with his former flame, Lawyer Park who tells him that she knows he purposely broke up with her due to his political dream. She also warns him that she would make it hard for him to achieve his goal.

Meanwhile, Detectives Jang Seung Cheol and An Se Jin are investigating the missing case of Baek Soo Jung. They retrace her steps and found the convenience store where she was last seen. According to the clerk, Soo Jung was talking to someone on her cellphone and he overheard her say she is going to meet up with that person. Seung Cheol and Se Jin locate the nearest café and get the confirmation that Soo Jung was there meeting with someone. However, they are unable to see the other person’s face as the CCTV camera did not capture it. 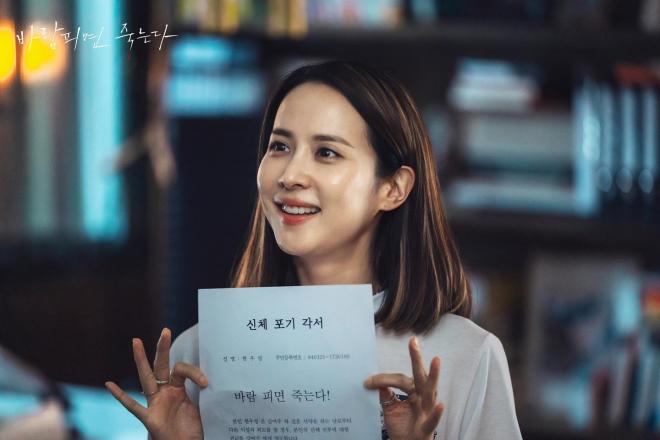 After their unsuccessful trip to the café, the partners decide to go back to Soo Jung’s studio, which they have inspected earlier. This time, they conduct a luminol test and much to their shock, they see a huge blood spatter on the wall. Meanwhile, Yeo Joo’s housekeeper sees a huge stain behind the freezer in the basement but before she is able to clean it, Yeo Joo arrives and reminds her of her previous task.

On the same night, their new freezer arrives but instead of replacing the old one, the delivery guys place it at a different location as they are unable to move the old freezer. Housekeeper Yeom Jin Ok recalls that the freezer should not be heavy as it is empty. Her curiosity takes over and she lifts the freezer door to look at its contents.

Cheat On Me If You Can Premiere Afterthoughts

Cheat On Me If You Can definitely intrigued in its first week. The macabre theme combined with its interesting characters are enough reason to tune in. Cho Yeo Jeong is in her element portraying the Kang Yeo Joo, the crime novelist with a murderous tendency. I love watching her play an emotionless but astute woman. She may seem detached, yet she is protective of what she has. She is not the type to trust easily and that makes it hard for her to establish an interpersonal relationship. 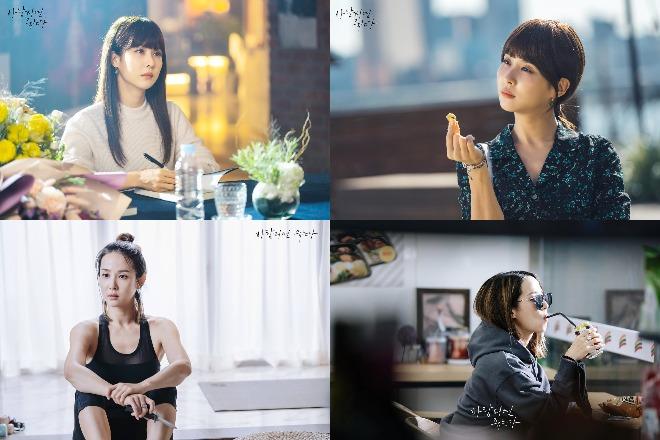 Go Joon is as charming as ever and really pulled off his character. I was totally sold on Han Woo Sung’s images as the perfect husband and the womanizing lawyer. While I don’t tolerate infidelity in a relationship and I hate his betrayal of  Yeo Joo’s trust, there is something endearing about the way Go Joon played the character (I still hate Han Woo Sung). You can’t help but admire how meticulous he is in hiding his relationships that Yeo Joo remains none the wiser. 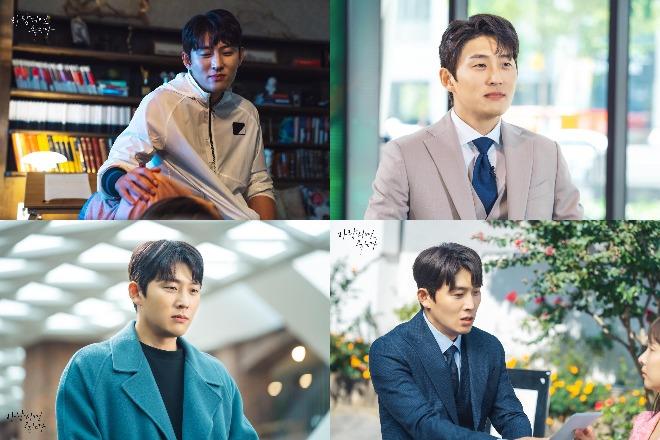 Another thing that makes Cheat On Me If You Can fascinating is the way the story unfolds. I love how it tickles viewers’ imaginations especially on Baek Soo Jung’s case. I can’t help but question things and come up with different scenarios as to what really happened to her. Is Yeo Joo really involved or is there someone else she met up that night? You can’t really discount Woo Sung because for all we know he has something to do with Soo Jung’s disappearance.

Also, Soo Ho is hiding his true identity. What exactly is his agenda and why is he observing Yeo Joo? Who put him up with the task? How will the College student affect Yeo Joo and Woo Sung’s marriage? Will he give in to the temptation or will he stick to his promise? I also wonder what Yeo Joo will do once she finds out Woo Sung’s past affairs. Will she really make herself a widow instead of divorcing him? Would she really kill him or is she just all talk? I have so many questions that hopefully the drama is able to answer or satisfy. If you are as curious as I am, I guess we just have to watch out for the succeeding episodes.

Cheat On Me If You Can airs every Wednesdays and Thursdays on KBS2 TV at 9:30PM KST. It is also available for streaming on Viu.

FacebookTwitter
SubscribeGoogleWhatsappPinterestDiggRedditStumbleuponVkWeiboPocketTumblrMailMeneameOdnoklassniki
Related ItemsCheat On Me If You Cancho yeo jeongGo JoonK-dramapremiere
← Previous Story K-Drama Review: More Than Friends Affirms How Despite The Tears, Experiencing Love Is Life’s Greatest Bliss
Next Story → “Hello? It’s Me!” Rounds Up Main Cast With Choi Kang Hee & Kim Young Kwang As The Lead Pairing