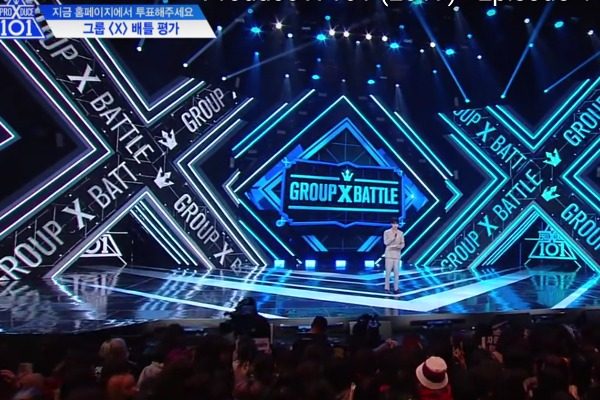 The intense group battle performances continued on its fourth episode.

Produce X 101 episode 4, which aired on May 25, showed thirteen more teams competing for a chance to perform on Mnet’s M Countdown and receive the coveted benefit points. All members of the winning team will get 3,000 additional bonus points and the member with the highest votes get ten times the score. As mentioned, the team with the greatest number of votes will be performing on Mnet’s music program. 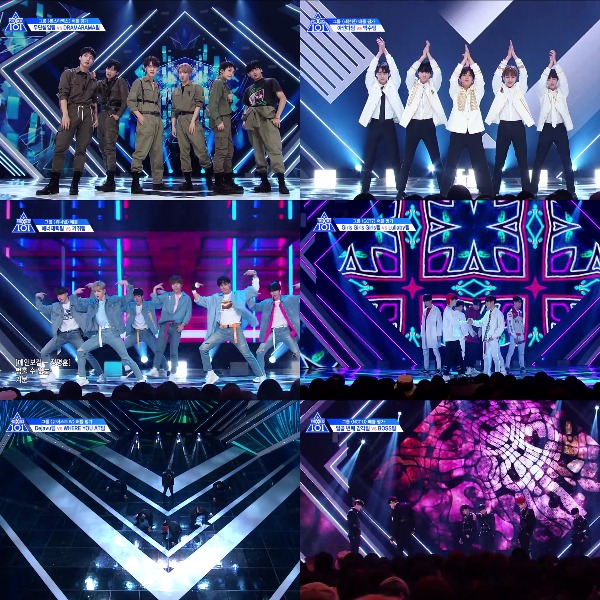 Last week, three groups showcased their talents as they perform to the debut and hit songs of EXO (“MAMA” & “Love Shot”) and BTS (“No More Dream”). The remaining teams will cover songs from groups BTS (second song), MONSTA X, SEVENTEEN, WANNA ONE, GOT7, NU’EST W and NCT U. Jooheon of MONSTA X joined this week’s Produce X 101 episode as a special trainer.

This team, composed of trainees Park Yun Sol, Lee Hwan, Yun Hyun Jo, Lee Won Jun, Jung Young Bin and Moon Hyun Bin. Their original choice for the center position was having a hard time keeping up with the role. They managed to overcome the challenge and tapped Moon Hyun Bin as center. Though the National Producers on-site picked him as the number one trainee for his team, group “No More Dream” won. Additionally, trainee Kim Hyun Bin garnered the most votes with 285.

Team Trespass also went through a struggle of their own as trainee Wei Zi Yue messed up his parts. Trainer Choi Young Jun even told them their team was the most sloppy and unstable and called out Zi Yue as the worst member. With the help of leader Lee Gyu Hyung and support from members, Wei Zi Yue was voted as the top trainee with 218 votes. Team Trespass also won over Team Dramarama.

Park Sun Ho and Jooheon had a touching reunion during the teams’ rehearsal. The MONSTA X member couldn’t help but remember the times they spent together as trainees in the same team. Teary-eyed Jooheon said that they had a lot of fun times together and he was glad that Park Sun Ho is still trying with as much passion. Team Adore U also had to change their center as Wang Jyun Hao lacked the right vibe for the position.

Meanwhile, Team Clap’s Ham Won Jin felt pressured being the leader and center of his group. Despite the challenge, the trainee was able to continue, and their team emerged victorious. Kim Dong Hyun got the highest votes from the on-site voters with 171.

Trainee Anzardi Timothee, who picked the members, was clearly not focused during practice. He kept on missing the steps and spacing out as the other members continue to rehearse. The group gathered to discuss and Timothee told them about the passing of his grandmother and that he went straight to practice after her funeral. Showing compassion for their grieving teammate, the rest of the members encouraged him and thanked him for opening up to them.

On to the other group, Team Light was facing a difficulty too as Trainee Uehara Jun was having troubles with his high notes. Fortunately, on the final stage, the trainee managed to hit that high note, however, it was not enough to give his team the victory. Team Energetic won the hearts of the on-site voters as they gave the group 582 votes.

Despite not adding acrobatics to their choreography, Team Girls, Girls, Girls impressed Jooheon with their vocals. He praised them and said they were the best group he has seen so far. However, Vocal trainer Shin Yumi singled out Kim Hyung Min for lack of energy. Testing the members’ patience, Hyung Min even went out during practice. Some searched for him, but instead of reprimanding him, the members gathered together for an honest talk. He eventually confessed that he was not really keen on performing the song. They made him realized that since they belong in the same team, they share the same suffering and perhaps fate. If one of them loses, the rest loses too. He promised to try harder from then on, for the team’s sake.

On the other hand, Team Lullaby replaced their main vocal from Lee Ha Min to Song Yu Vin. However, during the dance part, Yu Vin’s microphone stopped working and their stage ended without hearing Yu Vin’s voice for the rest of the song. Trainee Kim Kook Heon, visibly upset for his friend, cried on stage. The group went backstage and discussed if the other team should have a repeat performance. Taking on the higher road, and also wanting to have a fair competition, Team Girls, Girls, Girls agreed to have Team Lullaby perform again. The good deed did not go unnoticed as National Producers vote for Kook Heon’s team, awarding the group a total vote of 463.

The teams covering NU’EST W’s debut and hit tracks were formed from trainees who did not get picked. During team practice, both groups showed their strength and weakness. While Team Where You At seemed to have mastered the dance and moved in perfect sync, they needed to work more on their singing. Trainee Lee Tae Sung’s voice kept cracking during the vocal practice and their energy was quite low for Voice Coach Lee Seok Hoon.

On the contrary, Dance Trainer Kwon Jae Sung scolded Team Dejavu for lack of coordination, telling them that they could all get eliminated. The group, however, managed to impress Lee Seok Hoon. Both groups were able to deliver on their performance stages, but Team Where You At outscored the other group 588 total votes.

Composed of popular trainees, Teams Six Stones and Yellow Pink entered the stage amidst loud cheers from the audience. Jooheon had a fun time teaching the members of Six Stones how to properly rap their parts. While they laughed and enjoyed their vocal practice, their dance rehearsal with Trainer Bae Yoon Jung was tensed. The members kept missing the beat and looking confused with their dance steps.

Meanwhile, Kim Yo Han of Team Yellow Pink struggled with his role as the main rapper. He indicated during parts selection that he wants to be a vocal, but center Lee Jin Hyuk helped him with his parts. On the day of the vocal practice, he surprised Jooheon and Shin Yumi with his accurate sense of rhythm. Though pleased with his rapping skill, they pointed out his posture and gestures. And said that he needs to do something about it. Both groups gave stellar performances, but it was Team Boss that got the highest total points of 566. Kim Yo Han emerged as the top over all trainee for NCT U stage with 170 votes.

After the rigorous performance battle, the trainees gathered together. National Producers Representative Lee Dong Wook announced the final winning team. With the most on-site votes, Team No More Dream edged out the other groups. As a result they will be performing their cover of BTS’ debut song on M Countdown. 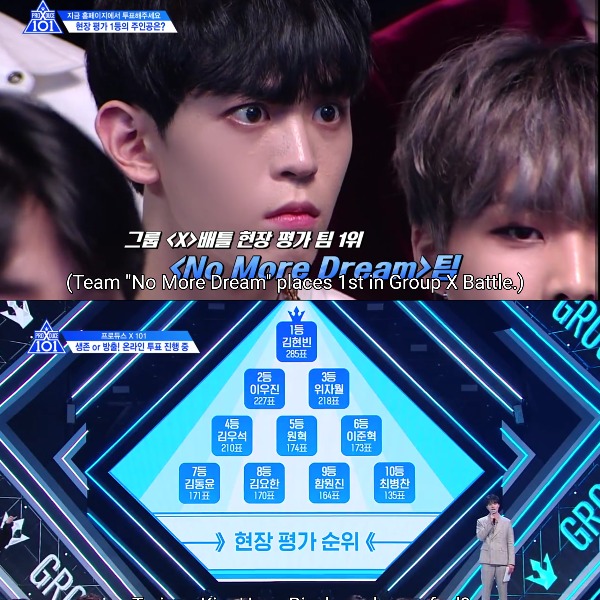 Individual rankings, without the benefit points, placed Trainee Kim Hyun Bin at the number one spot. Meanwhile, Trainee Hong Sung Jun was at the last position during initial rankings. However, with the bonus points added, he climbed 50 spots up, but Hyun Bin remained at the top rank. A number of trainees also went down after the inclusion of the benefit points. 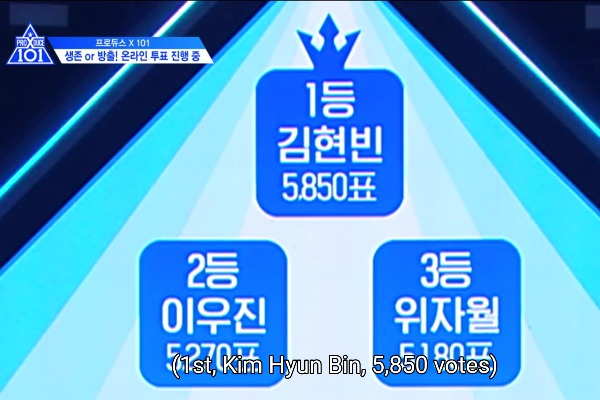 Next week, trainees will know their final standings as Produce X 101 first ranking announcement happens. The individuals who are not part of the Top 60 spots will be eliminated.