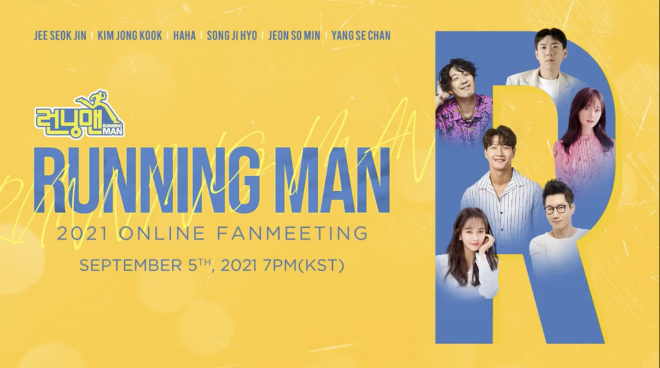 Despite the numerous postponements and changes in schedule that took place last year, the well-loved cast members of Running Man are now ready to greet their lovely fans via a virtual fan meeting this coming September. 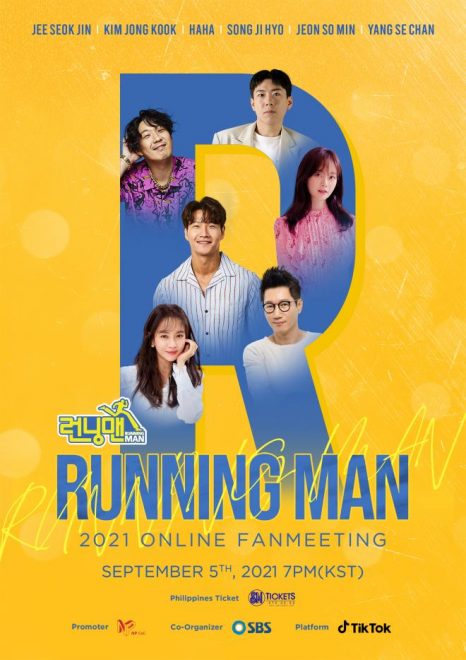 Minimall, one of the official event partners, confirmed the exciting news on July 17 via their social media accounts. Though sans the “Nation’s MC” Yoo Jae Suk, the announcement came with a vibrant teaser poster that shows the fresh looks of Ji Suk Jin, Kim Jong Kook, HaHa, Song Ji Hyo, Jeon So Min, and Yang Se Chan. The sneak peek also summarizes all the details fans should take note of regarding the event.

This will mark the cast’s first fan meeting in one year and nine months following Running Man Live, which took place from February 2019 to December 2019.

AN INVITATION TO REMEMBER

Further raising spectators’ anticipation, SBS Entertainment also uploaded a one-minute and 43-second clip, where the members happily greeted and invited their fans to join them for a night full of surprises and joy.

Though it was a short clip, everyone can really see the chemistry between the members and how they enjoy each other’s company despite many years have already passed.

The popular weekend show has been staying true to its mission to bring laughter and joy to its viewers for more than a decade now. It currently has 565 episodes and fans can expect that there will be many more to come.

Despite the ongoing effects of the COVID-19 pandemic, Running Man: 2021 Online Fanmeeting will surely give the viewers the comfort and happiness that they deserve during these hard times. It will likewise serve as the variety stars’ avenue to spread positivity and connect with their fans through various individual and group segments in the most convenient way possible.

Filipino fans can purchase tickets to the 120-minute online event via SM Tickets or Mini Mall‘s e-commerce platform. Tickets cost PHP 950 each and sales will run until September 3 at 12 PM PST.

Instead of a physical ticket, viewers will instead receive a verification code through their emails. This will serve as the official pass to the special event. Other details regarding the event can be found on Running Man‘s official Facebook and Instagram pages.