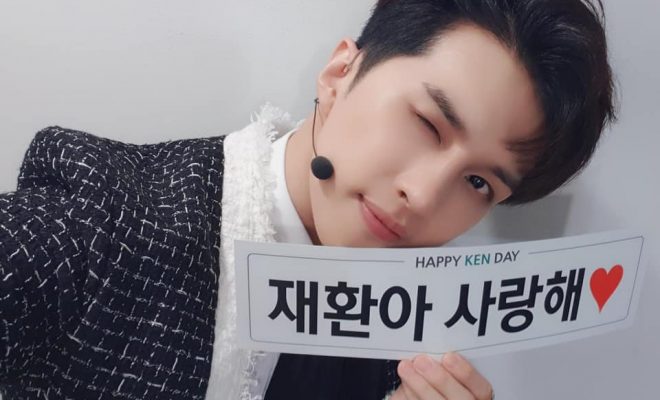 VIXX’s Ken surely had a great time celebrating his special day together with lovely Starlights!

VIXX’s talented vocalist Ken had celebrated his birthday together with fans in his first solo fan meeting HAPPY KEN DAY (I KEN DO IT) on April 6.

The Korean idol’s shining presence partnered with his amazing performances has undeniably captivated the hearts of Starlights. Not only for a single time, but he amazed fans in two fun-filled shows held at COEX’s SM Town in Seoul.

As a way to repay the love and support he has received from his followers, Ken revealed that he had personally participated in directing the shows.

Gracing the stage with his unique, soulful, and husky vocal tone, Ken started off with his solo song “So Romantic.” Additionally, the birthday boy serenaded the audience through an entrancing performance of VIXX’s song “The King.”

With the fan meeting stretching for about two hours, the 27-year-old singer and actor also revealed his playful side. To fulfill fans’ wishes, Ken showed off his adorable moves through a random dance challenge. Likewise, he was able to showcase his incredible vocal prowess with a touching musical medley performance.

A letter to Starlights

Before wrapping up the fan meeting, Ken thrilled the audience one last time as he soulfully sang “Bobaya,” the official soundtrack of celebrated fantasy drama The Legend of Blue Sea. Soon after, the idol expressed his gratitude to Starlights with a special handwritten letter.

“I am so happy. I will be able to pay you back,” Ken told everyone.

“Thank you for enjoying the fan meeting. Just being together is a good memory. I love you,” he added.

Back in 2018, Ken bagged his first musical award thanks to his perfect character portrayal in the musical Hamlet.