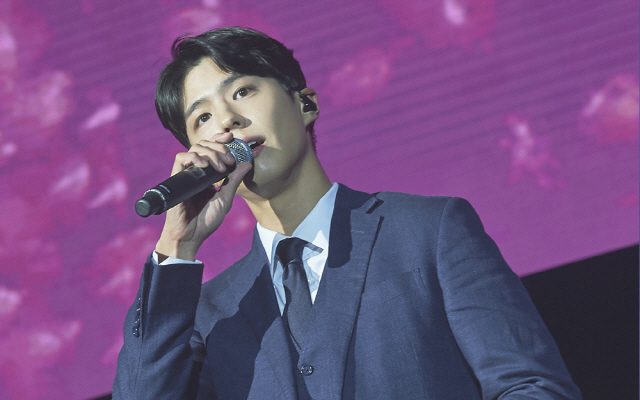 Wielding indescribable magic, Park Bo Gum has redefined how a fan meeting should be done.

The aftermath of 2019 Park Bo Gum Asia Tour Good Day in Manila left us awe-inspired. Aside from being amazed on the parade of his talents, the actor’s engagement to the big crowd was extraordinary. 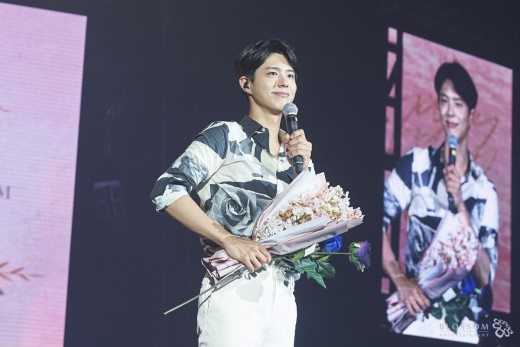 Fulfilling his initial promise, the last stop of his Asian tour proved to be MORE THAN just a GOOD DAY. Gifting a 3-hour showcase of his smarts and skills, Park Bo Gum made sure that it would become a spellbinding moment for him and his faithful supporters.

Conjuring a charm as soon as the spotlight pointed at him, Park Bo Gum whipped out an addictive alchemy of song, rap and dance performances. Leaving no room for the attendees to rest their admiration. The multi-talented actor eloquently and gamely shared his thoughts to candid and retrospective questions.

In case you miss out the last leg of his incredible fan meet, hop on to Bogum Express for a magical ride that will take you to the memorable highlights of #ParkBoGumMNL.

Nothing beats a love confession through a serenade! Sweetly singing a cover of Day6′ “I Like You” made all the fan meeting goers vocally declared how much they like Park Bo Gum too.

Wasting no time to treat his supporters right, Park sat down for a comfy interview with Filipina artist Anne Curtis. Happy and excited for his fan gathering, Park Bo Gum received deafening cheers from the crowds.

Wearing his pretty smile, the actor revealed that the thing he wanted to do at that very moment was to have a “good day” with the equally enthused audience.

Recently, Park celebrated his birthday and the next question drew a collective surprise from the crowd. He was asked about the top 3 things on his bucket list that he wanted to do before turning 40.

“First, I want to get married and have babies,” he revealed. As Korean actors are known to stretch the prime of their lives before tying the knot, it was an odd revelation from the actor. The listening audience of course took the opportunity to swiftly imagine in their own worlds, being married to him with mini Bogums as their babies.

“I want to study abroad. And I really want to act in foreign films,” he said, for the other two goals he wishes to aspire.

With Park’s impressive English language skills, it seems that he is already working on building tools he needed for his mentioned dreams. Focused on his career and life trajectory, the well-mannered actor radiated optimism, solidifying the claim that it’s unlikely for him to have an anti-fan. 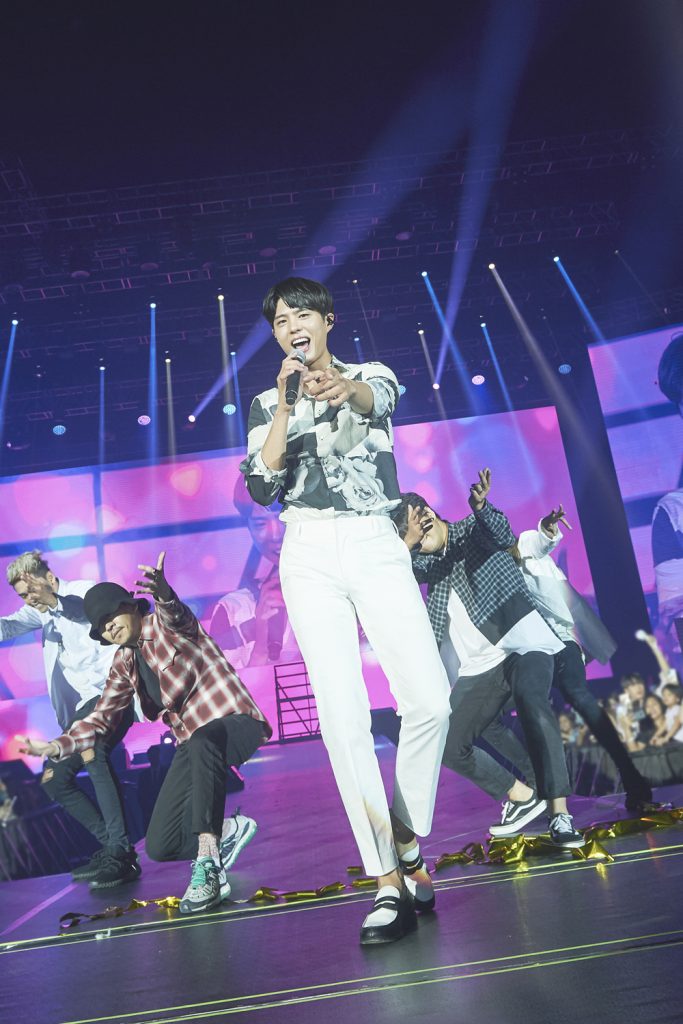 When asked about what’s keeping him busy, he relayed how he has been learning music and preparing for his upcoming film Seobok. We love how he mentioned that he knows Anne Curtis is a fan of Gong Yoo – and cutely gushed together with her, saying that he is a fan of his co-star in the film too.

In between questions raised by the emcee, quick videos of the actor were displayed. The man of the moment willingly shared untold stories about it.

Equipped with hosting skills, the articulate artist had kept the engagement level with the huge crowd. Frequently, asking their thoughts and suggestions to keep the connection steady.

Moving to a new segment, a surprise raffle event got the lively audience excited. Park Bo Gum himself, drew the winners complete with him creating the sound effects before announcing the lucky ones.

Once selected, Park joined the viewers in reminiscing some of the best scenes in his recent drama that were picked by his fans.

In one of the Cuba scenes highlighted, when Soo Hyun and Jin Hyuk walked barefooted, Park dropped a sweet teasing dagger to fans — hinting how he is similar to his character if ever he will have a girlfriend. 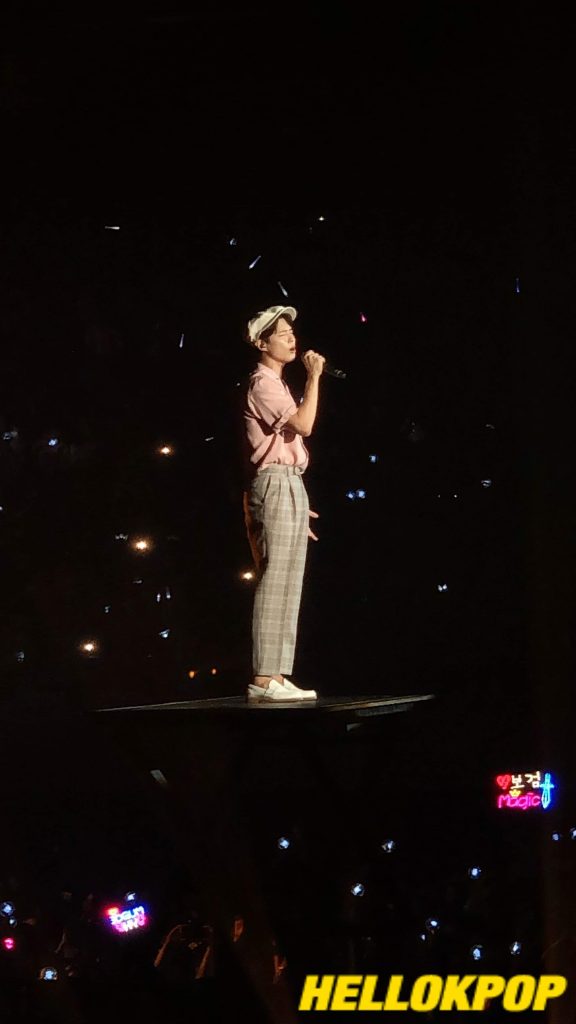 Notable on this part of the night was how he was able to multi-task well. While he shared his insights about Jin Hyuk’s bravery to confess what he felt for his boss, amidst constructing his thoughts, one of the love declarations from his fans came strong, and he responded right away by saying “saranghae too”. All throughout the night, he made it a point to reciprocate those warm words, as soon as he heard it – and that was really adorable.

Knowing what probably the last chosen best scene was, the actor confessed that the “drunk Jin Hyuk” scene was hard to shoot. Admitting he does not drink alcohol, he mentioned a few takes were done as he followed the director’s lead to capture the right mood of that moment.

Thereafter, the lucky winners were invited to the stage to reenact scenes from Encounter. Participating happily, Park Bo Gum listened to music together with the first girl. He also put on a scarf for the second winner and gave a deserving hug to the last girl. 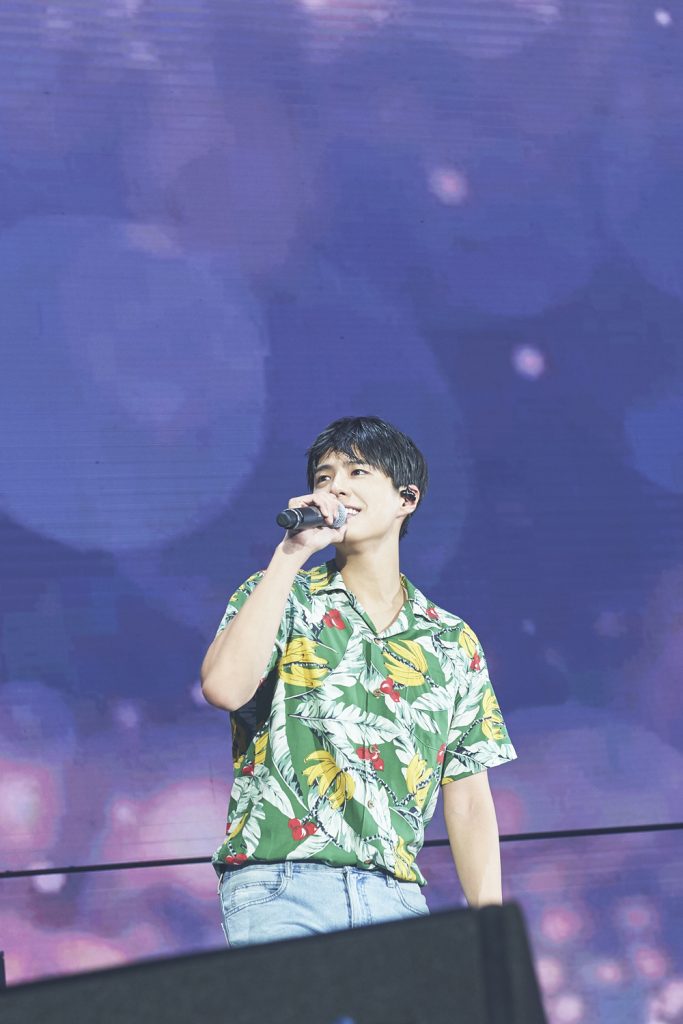 Always on a goal to make the night fan-centric, Park Bo Gum prepared an interactive and aromatic session in the arena. Showing how to make a scent diffuser, the actor made sure to work on the project by following the suggestions of his thousands of fans in attendance.

He carefully designed a Manila-themed scent diffuser. Casually chatting with the host, he shared learning it especially for the Asian tour. Being a fan-service prince who wanted to involve the fans, he filled in the glass with various miniature fruits.

He also mischievously replied a vague I-like-Durian-Yes, when asked by the host if he likes the exotic fruit. That drew chuckles from the audience. Additionally, Anne Curtis taught him the local word for sweet-smelling. After pouring the melted wax for the finishing touches, he drew another lucky fan who would take home the scent diffuser he just made. 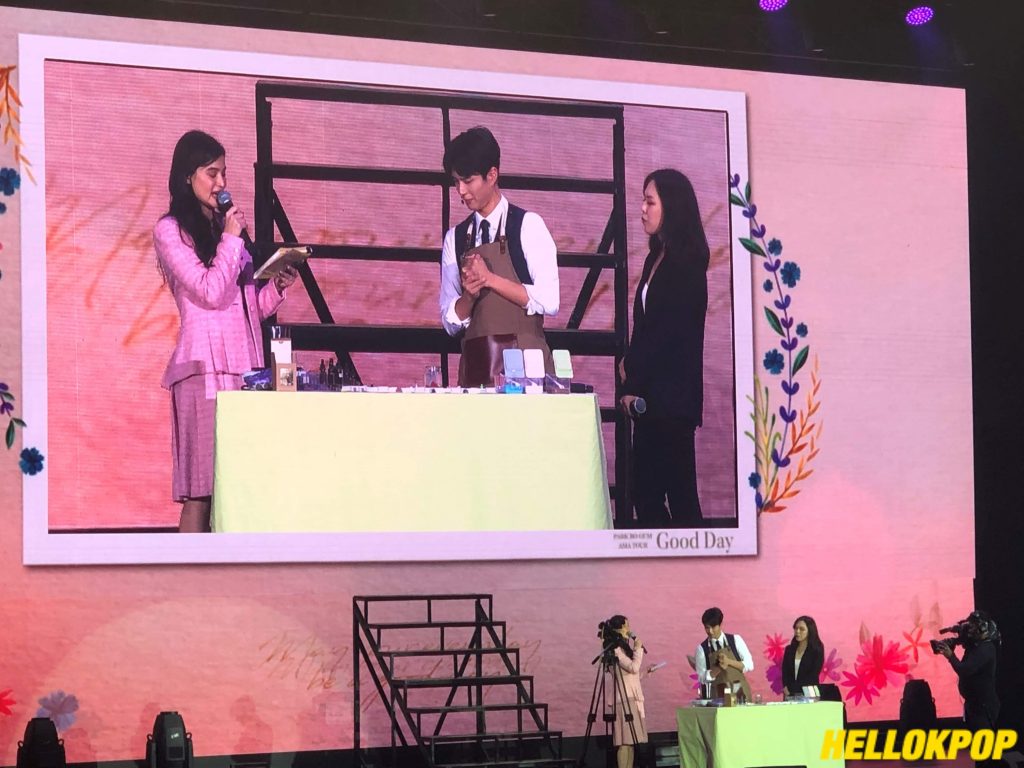 Eager to show his appreciation to his fans, he brought an array of gifts; from shoes, doll, lightstick and calendars to pre-drawn lucky attendees. Noticing a lot of calendars in the roster of gifts, he joked about it making the crowd laughed. Turning the calendar monopoly to an opportunity, he smartly suggested how fans should remember him whenever they look at it.

Likewise, he gave away personal items from the clothing he wore on TV show guesting and advertisement shoot. Moreover, he also brought autographed Encounter posters and personalized polaroid photos from his travels as special gifts for the fans.

Nearing the end of the talk portion, Park thanked the pretty emcee who brightened up the program flow with him. Promising to be back for the second part of the event, the actor and his fans took a quick break.

Promising song and dance performances when he met the Philippine media in his conference, Park Bo Gum forgot a disclaimer. It was a concert – an alternating soothing and explosive stage, that further made the fans love him even more.

From belting out heartfelt ballads, powering dance songs and throwing raps in Bogum swag, the arena transformed into a party house. Electrified by the actor who can pass as a solo K-Pop artist if he aspires.

After casting a dreamy spell with track “Let’s Go See The Stars”, he captivated with his cover of IU’s “Through The Night”. He went on with sweet serenades from his drama OSTs, “Always Be with You” from Encounter; and “My Person” from Love in the Moonlight. 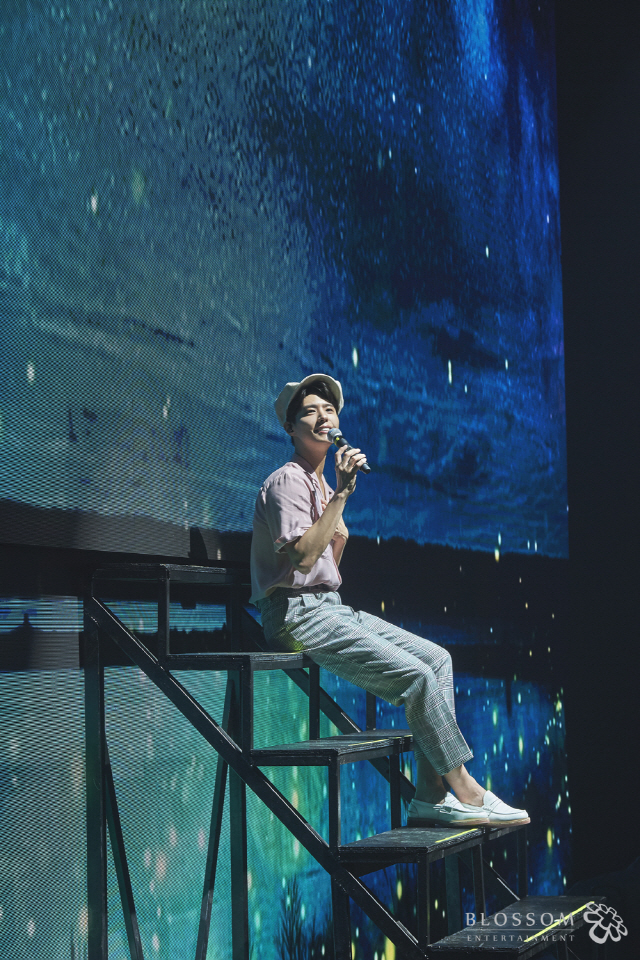 Turning the heat up, Park Bo Gum streaked to some groovy music including “Bounce”, “Honey”, and “Entertainer”. Owning the moment, he didn’t miss on trying local music as he sang together with the fans through a catchy pop song popularized by Filipino artist Daniel Padilla. Undoubtedly, he had won the hearts of his devotees fully.

Admittedly, the wondrous vaunting of Park’s talent took us by surprise, not to mention blissfully tired. But the crowd could hardly complain about it – when their favorite person poured in his sleek rapping skills through G.O.D’s “One Candle”.

We already know how skilled #ParkBoGum is and he just proved it when he rapped, sang and danced to G.O.D’s “One Candle”. That’s one talented entertainer right there!#ParkBoGumMNL #OVATION40

Taking the showgoers to unimaginable highs, Park Bo Gum included extraordinary moments like playing the piano for his stage of “I Will Be Here”. Letting the BOGUMMYs sing with him, his gift in connecting with fans proved to be truly remarkable.

#ParkBoGum just touched the hearts of the crowd with a heartfelt rendition of “I Will Be Here” #ParkBoGumMNL #OVATION40 pic.twitter.com/qgCuumPNLN

The fun and energy did not stop from there. Barely getting a rest, it was impossible how Park Bo Gum still had energy to do dance covers. He moved to Twice’s “What is Love?” and SEVENTEEN’s “Pretty”. Topping it up with BTS’ “Boy With Luv”, the actor shared how he received some coaching with his friend V for the dance number that he especially prepared for the last stop of his Asian tour.

We are not yet over #ParkBoGum and his fan meet, we bet you are too! So here’s Bogum displaying his dancing skills as he moves and grooves to #BTS’ “Boy With Luv”. He admitted that he learned the dance from Taehyung himself! #Friendshipgoals, anyone? #ParkBoGumMNL #OVATION40

Ever the charmer, Park Bo Gum obliged to the fans’ coaxing and danced to “Boombastic”, a popular teaser of his Love In The Moonlight drama. At one point of the show, he even surprised the upper level attendees as he roamed around while singing, for them to feel and see him up close.

Through his final song gift, he expressed gratitude to all his fans. The actor also wished for good fortune to happen to them.

Showing no signs of depleted energy, he made sure to greet each attendee happily during the Hi-Touch session.

Ever the crowd-pleaser, #ParkBoGum indulges the fans’ request for him to dance “Boombastic”, which was pretty popular during Love in the Moonlight era. He did it without music, only the crowd sang it for him. He’s such a cutie! #ParkBoGumMNL #OVATION40

Fans left the arena with love and gratitude in their hearts. As well as memories of a good day spent with their beloved actor.

More than being worth the wait, his gift to inspire through his artistry makes Park Bo Gum a blessing.

#ASIATOURinManila
I'd like to give my thanks to all the fans who were with me at the last fan meeting of my Asia tour. It was really a good day with all of you thanks to your fervent ardor. Let's stay healthy until we meet again. May the grace of God always be with you all!! pic.twitter.com/hAWQm2iGxt

Hellokpop extends gratitude to Ovation Productions for the media invites to the event. 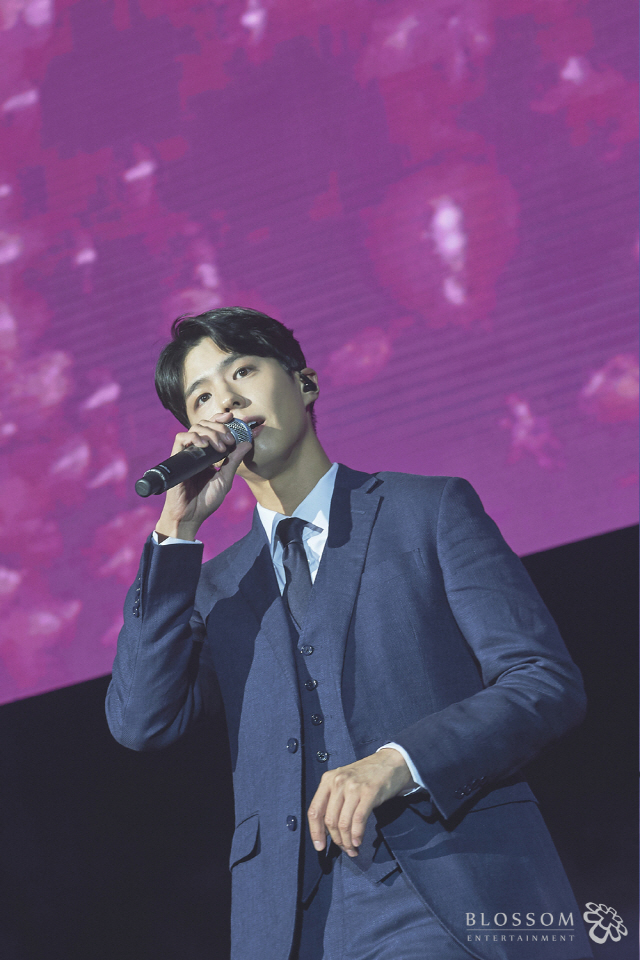