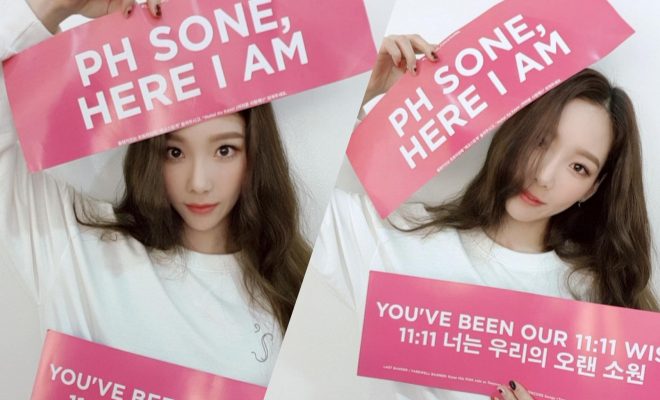 PH SONEs braved the rain and heavy traffic to witness Kim Taeyeon perform live at the New Frontier Theater in Manila on December 14 for her first ever solo concert in the Philippines.

The Girls’ Generation leader wowed her fans with her amazing vocals and bubbly personality starting with her opening song “Here I Am” which was greeted by fans’ loud cheers, bright lights, and special banners — a suitable welcome for the one-and-only KING Taeyeon.

She continued to showcased why she is one of the most talented vocalists in K-Pop with her stages of “I Got Love”, “Fire”, “Love You Like Crazy”, “Something New”, among others.

Read: 4 Reasons Why “‘s… Taeyeon Concert Tour” In Manila Is The Perfect Concert To Cap Off 2018

Aside from wowing the crowd with her vocal prowess, Taeyeon, who returned to Manila after more than three years, shared candid moments with fans through her talk portions. With the help of an interpreter, she expressed admiration and astonishment to hear the fans singing along with her.

Taeyeon said coming to the Philippines made her experience a hot December for the first time — thanks to the warm welcome fans gave her. She added that she was glad to come and meet her Filipino fans.

The concert continued with performances of “Do You Love Me”, “Rain”, “All Night Long,” “Baram Baram Baram”, and “Why”.

In another ment, the singer told the crowd that the concert was a memorable one and she was happy singing for her Filipino fans. She applauded the energy coming from the audience and likened it to a World Cup series.

Taeyeon kept on showing her playful side as she continues to engage with the fans. Curious about the clothes Philippine Santas wear, she innocently asked the audience if they go around wearing sleeveless clothes or bikinis due to the hot weather, earning a good laugh from the crowd.

She then treated her fans to performances of songs from her Christmas album This Christmas: Winter is Coming namely “Christmas Without You” and “I’m All Years” — her favorite tracks from the album.

The singer became more personal as she shared having roller coaster emotions lately and feeling a bit down due to the weather. She acknowledged how she was able to laugh the most through the concert and dubbed her Filipino fans as the funniest. She thanked the passionate crowd who cheered for her.

With the warm reception and high energy, she mesmerized the crowd with her stages of “Gravity”, “Fine”, and “Feel So Fine”.

Before closing the concert, Taeyeon praised the crowd once again for giving enthusiastic cheers, adding she will never forget the special night.

In addition to loud cheers, she also received gifts from the crowd including a special Funko Pop doll, a message book containing messages from fans, and a special banner made especially for her.

For the encore stage, Taeyeon performed “Time Lapse”, “Circus”, and “I”. As she waived her fans goodbye she left the stage with a promise to see PH SONEs again.

’s…Taeyeon Concert Tour in Manila marked the singer’s first solo concert in the Philippines. Moreover, it also made her the first member of Girls’ Generation and first artist from SM Entertainment to stage a solo show in Manila.

Taeyeon first came to the country with the rest of Girls’ Generation in 2013 for Dream K-Pop Fantasy Concert which was also presented by PULP Live World.

Furthermore, tickets to her first Manila solo show were sold out in a matter of minutes, making her the fastest selling K-Pop act in Philippine history.