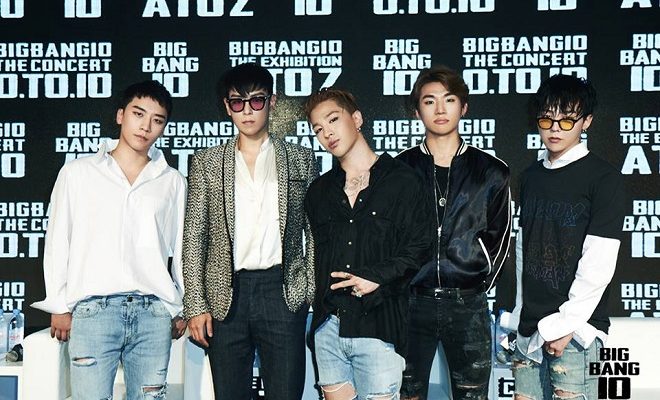 Do you know BIGBANG earned more than the highest-paid all male group in America last year?

On the recent CNN program ‘Talk Asia’, CNN Seoul Correspondent Paula Hancocks met up with BIGBANG for an in-depth interview at S-Factory in Sungsu-dong, Seoul, where the group’s tenth anniversary exhibition is taking place. From reminiscing over the last ten years to forecasting ahead to the next decade, each member of the group shared his memories of the long journey that brought them to the top of K-pop.

Read More: BIGBANG on military service, next 10 years and more

Question: last year you made more money than Maroon 5, which is the biggest, the highest-paid all male group in America. You’re bigger than all of the bands in South Korea. What makes you different?

G-Dragon (GD): [I think] there are different fun aspects. It’s not a performance with just one color from beginning to the end, there are also solo parts in between. There are performances that just look cool, but there are also some fun elements, so [I think] that’s why people don’t get bored. There’s also a flow, and that’s what we care about the most. Doing some sort of surprise entry for the opening, perform some fast tempo songs in between and get the crowd excited in the beginning, while giving them time to relax here and there, we’ll also do some emotional songs, then throw in fun parts to get rid of the boredom, bring the excitement to a climax and burst in the end we think a lot about this kind of flow, since the audience also feel it themselves, [I think] that’s what makes them like us and helps them to enjoy it.

Question: So You have literally grown from boys to men together. How do you manage to do that and still make it look fun?

Taeyang (TY): Well of course there have been hard times in between. But over the years we have become so close, and we do really like each other outside of work. The more time we spend together, the more we make each other laugh…the more we have fun together. And over time that level of closeness becomes more and more and we are happiest when the five of us are together, having that kind of relationship is the reason why our band has lasted.

GD: They are fellow band members, but they’re also brothers, they’re family. Because we spend so much time together, we have that kind of feeling of Intimacy and a bond that’s more different from other boy bands.

Question: But I mean you must have drive each other mad sometimes. You spend a lot of time together. I mean — what do you disagree on?

TY: What we mean by there haven’t been occasions to fight…is that we normally tell each other right away when we don’t like something. So we don’t harbor any negative feelings and we don’t let it grow. We just tell each other right away: ‘you were wrong in doing that’, all of us have that kind of personality and that’s why we’ve lasted this long, I think that’s the biggest secret to lasting for 10 years.

Question: You clearly have very, very different personalities. So help me understand who’s who. Who, would you say, is the joker amongst you?

GD: It depends on the situation, but Top is the biggest joker, even though he’s the oldest. In Korea the older brother and younger brother relationship is more complicated than other countries. So as the oldest brother, like a friend, sometimes almost like the youngest, he makes us feel comfortable. So in that sense I think TOP might be the one.

Question: So, G-Dragon and Seungri, I’ve heard in the past that you have been described as Tom and Jerry…

GD: I don’t know where they came from but I guess that’s how it looks like. Because he’s the youngest, and [I’m] the leader, that’s how we met in the beginning, so [i] tease him the most, and he takes it well. But in the end it always feels like he’s the one winning so I think that’s why.
TY: Yeah. Jerry always wins in the cartoon in the end.
GD: Even though Tom looks stronger.
TY: Tom bullies Jerry but it’s Jerry who wins in the end, that’s why [they are called] Tom and Jerry.
Seung Ri (SR): I think they are right.

Question: So if you can describe to me what is takes to be a Korean pop-star. I mean, obviously, the training appears to be brutal. It’s like you’re a world class athlete, training for the Olympics. I mean I read in the exhibition around the corner, you do 12 hours training a day.

GD: I mean not 12 hours but almost, like most of the days. But then Korean system, I don’t know about the system in other countries because we haven’t experienced it, but Korea had such system established already, and we had no choice but to get into that system, so we didn’t have such condition to build a new system.

TY: I think how structured the system is, the 12 hours training, taking lessons, it all became more part of the system after we debuted as singers. Back when we were training, it wasn’t really about systematic training, it was more just following elder singers who debuted before us, repeating what they did, and studying to be like them. So we were actually quite lucky. But now it is much more of a system, and we do have lessons and things like that. If you look at how many entertainment companies in Korea have trainees, and the training that is in place, in some ways it does make me worry a bit that teaching has become mechanic, and I’m not sure if it helps.

Question: It took a fair few years before YG signed up on BIGBANG’s debut back in the 2006. Did you have moments where you thought, ‘this isn’t going to happen, we have put so much into this, we have sacrificed so much, it’s not going to happen’?

TY: I won’t say there weren’t because.. when we made our debut, as trainees, just before the debut, we had to make the cut on a audition show. Even by that time, G-dragon and I had already been training for ages, but the head of YG, Hyun Suk, told us that no matter how long we previously practiced, if we didn’t do well during that audition, we would have to drop out. So yeah, there were thoughts of what if we get sent home without even being about to debut, after training for so long. We worked so hard until the debut, day after day, thinking we might actually get sent home.

Question: So you released eight singles last year. “Bang Bang Bang” is one of your most popular — and the South Korean government actually used it to blast across the DMZ as part of their propaganda broadcasts. How does that make you feel? I mean, your music was being used, effectively, as a weapon.

TY: probably because the timing when our single came out worked with the situation back then. Also, many people were listening to our music, I think that’s why they used our song and played it in that way. We really don’t put much meaning behind it. Because our music, especially for Bang Bang Bang, is loud and powerful, I think that’s why the government chose to use the track in that way. We appreciate it.

Question: So we, we’ve looked at 10 years then. So looking forward, what is next? There is, as you know, a burning question in every fan’s mind — how long will BIGBANG last? And of course you have the mandatory military service here in South Korea. You have to join up before you are 30. I mean, time is running out.

TY: Every time the five of us gather, we’re always thinking about how we’re going to live our next 10 years…because this is how we’ve spent the last 10. We mostly ask those type of questions when the five of us meet up. Of course there are tasks and responsibility lying ahead of us, but it’s things that we naturally have to do. Because we want to make the next ten years even better, i think that’s why many people worry even more. Fans or the public. They worry a lot about what will happen to BIGBANG. But for us, rather than worried, we are really happy and we have always been this way. As we’ve doing, we are looking forward to the next 10 years with a optimistic mindset, and we are confident that everyone will be doing new things. We all have dreams, so that makes each day exciting.

Question: But, are we coming to the end of BIGBANG?

TOP: it’s more of a historical record, showing our history.

TY: It is for us to commemorate and celebrate 10 years. And there are many fans who have been watching us for that 10 years. It’s to enjoy our 10th year with them, and also to let them know to expect a lot more from the future. If it was the end of BIGBANG, we wouldn’t be laughing while doing the interview right now.