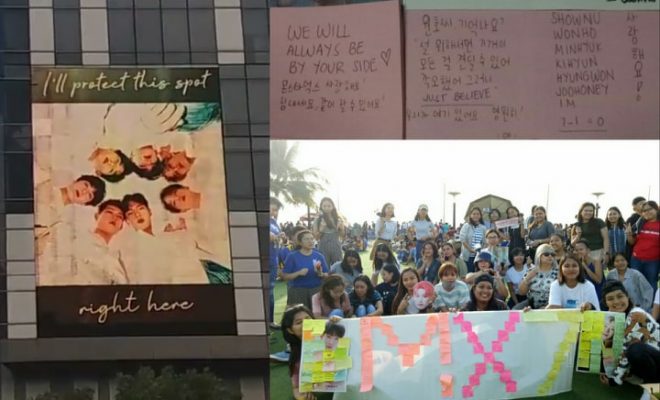 MONSTA X had raised the heart of “fighters” in every Monbebe – who convened around the world to keep expressing support for Wonho.

Monbebes showed that their unity extended beyond social media by gathering in various countries all around the world to show support for MONSTA X’s Wonho and the whole group. 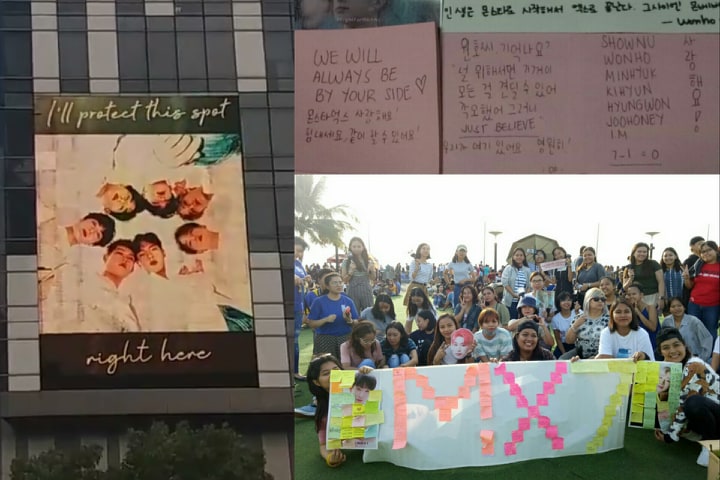 The fight for love and justice continues as Monbebes take their efforts to show the septet, especially Wonho, their inextinguishable support even more along with standing by each other’s sides in the midst of recent events. Having trended on Twitter for around seven days already with more than millions of tweets for each hashtag, many fans took their movement offline by gathering with fellow Monbebes in events organized by the septet’s local fanbases over the weekend, as well as engaging in various projects to show their love and support for the group.

The string of silent protests included a gathering of fans in Seoul, where Monbebes stayed in front of the building which houses Starship Entertainment in support of the members of MONSTA X in light of the recent events they face, as seen in the video posted by @mx_always7.

Aside from urging Starship Entertainment to keep Wonho in the group and encourage them to bring justice to his current situation, the protests also served as an opportunity for Monbebes to find hope and support in each other, as well as provide strength as they go on with their fight.

Fans in New York showed their love on the street by collecting post-its in the form of a beautiful heart with equally wonderful messages to the septet, as seen in the video posted by @deathcab4kyunie.

The same went with Monbebes in Chicago who banded together as posted by @xchittabun to show that they are continuing to fight for Wonho together as seen in the messages they sport on their post-its and slogans.

Monbebes in the Philippines also gathered to do their own silent protest in the form of collecting post-its for Wonho and the group on November 3. Over fifty fans were in attendance for the event, which was brought by the collective team effort of various fan bases of the group in the country. 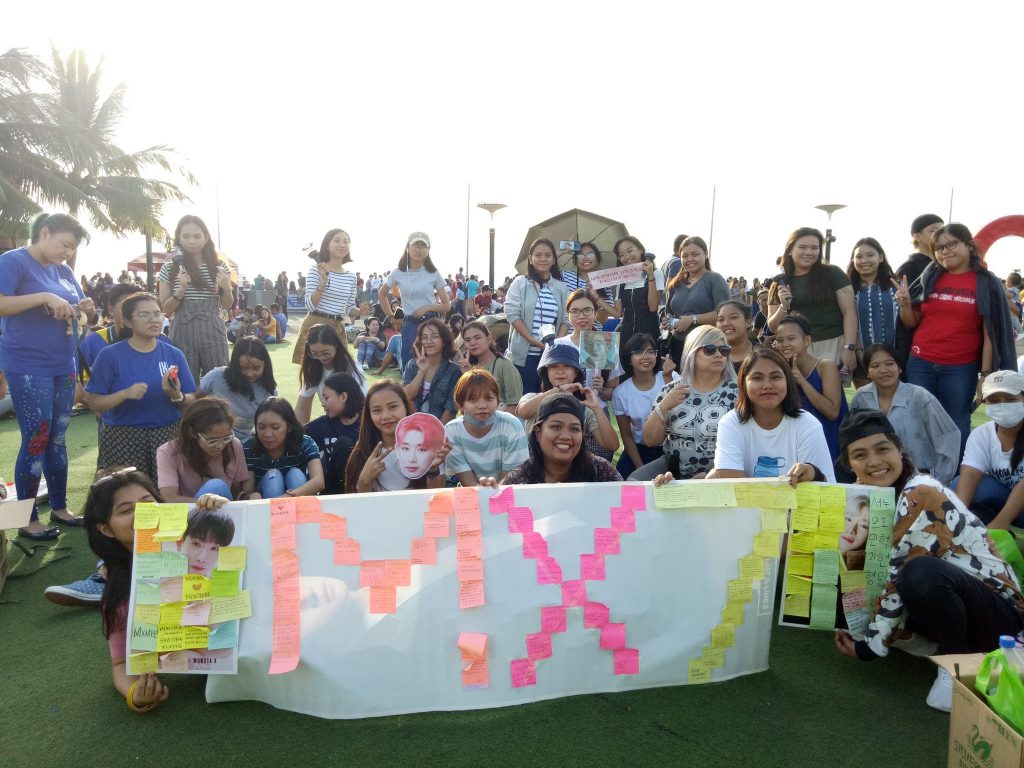 Wrapping up the event that we personally witnessed, fans sang “By My Side” while lighting up the sky as twilight approached with their Mondoongies.

I love you all day
I love you always
So in love with yourself
Thank your teaching me how to love myself @OfficialMonstaX #MonbebeSupportMonstaX#WeNeedWonho#WeLoveYouShownu pic.twitter.com/1I1ilrcjyn

“MONSTA X, we are here” is also what Monbebe in Colombia delivered as a message to the septet through their own protest organized by MONSTA X Colombia.

Meanwhile, fans in Argentina also gathered in the streets with slogans and banners of their own with the help of MONSTA X Argentina on the forefront.

Fans in Peru also gathered to perform the OT7 fan chant for MONSTA X while waving slogans and blue – a colour which symbolizes hope – balloons for the group in an event organized by Monbebe Peru.

[Added on November 21, 2019] Monbebes also gathered in Mexico City this November to appeal for Wonho’s return, as well as call out the rampant culture of cyberbullying, and even fans of other groups showed up to express their support.

For Mbbs who dont know,at this time H-Mbb is making a peaceful protest for the return of🐰and to stop the cyber bullying towards Monsta X in Mexico City and … let me tell you that there are TOO MANY PEOPLE, EVERYTHING IS COMPLETELY FULL, MANY OTHER FANDOMS ARE ALSO THERE 🥺 pic.twitter.com/3zF6LrU40W

Monbebes also worked together to fund and design several ads for the group, including a large-scale in New York City’s esteemed Times Square. Another huge one was the project by Monbebes in the Philippines, as brought by MONSTA X Philippines, displayed at one of the malls in the country – and it is only one of the many ways that fans had been showing their support for the group with.

WE ARE HERE FOR MONSTA X – A Monsta X Philippines' Support Ad in Megamall is now up!
Don't miss your chance to see it in person.
The Ad will run only today from 6am to 12mn.#ChangeForWonho#아이돌도_인간이다

Fans from the Philippines also brought another large-scale project by projecting the words “Wonho, did you eat well?” – an ode to the question Wonho would usually ask Monbebes in his tweets and posts – to show how much they missed the MONSTA X member.

The MoA globe asks, "Wonho, did you eat well?"@OfficialMonstaX@MonstaX_PH#멈추지_않길_나_약속할게#StarshipProtectMonstaX7 pic.twitter.com/dsyDzXy8YR

[Added on November 21, 2019] Monbebes in Thailand also put up a heartwarming ad at the MBK Center in Bangkok with two things in mind – keeping Wonho’s beautiful smile in everyone’s minds and reminding everyone that MONSTA X is and will always be OT7.

Meanwhile, several fans had let their passion for music speak their messages and thoughts, in hopes that it would move both MONSTA X and their fellow fans the same way the septet touches on everyone’s hearts with their songs.

Russian Monbebes (mmbb ent.) created a very special song for the group from zero in a matter of a few days – and they also included an encouraging video message from Russian-speaking Monbebes with words of support from different languages.

hope for your support ~ pic.twitter.com/7pwcm9xeuN

A couple of Monbebes from the account #PROJECTMBB0926 also penned a beautiful and heartwarming song for MONSTA X titled “Our Light” which contains lyrics that would surely make the boys smile.

A Monbebe also adopted an arctic hare from the World Wildlife Fund on behalf of Wonho as a sweet reminder to Monbebes’ one and only bunny of their unfaltering love to him.

About a week and a half ago I said I did something incredible for Wonho so without further ado 🥁🥁🥁 this is for you our forever happy, loving, and smiling bunny 🐰 #AlwaysBeMX7#다시만날_그날을위해@OfficialMonstaX @STARSHIPent pic.twitter.com/SUSUid4hq7

Currently, Monbebes are still proving that their fighting spirit is and will not be close to dwindling any time soon by continuing to push for Wonho’s return, call for MONSTA X to continue as OT7 in peace, and stand against the unfair situation that they are facing, as well as the perpetrators who brought forth the turmoil, through various efforts – which so far, had been achieved by the fandom through their unity.

In fact, more projects, including ads, letter collections, and gift fundraisers for the boys, are still underway from many Monbebes who are also juggling staging an actual protest against an industry that shuns people based on rumours and unverified pasts which stunts their room for growth at the same time.

Moreover, they had been showing how much MONSTA X had made an impact on their lives through these range of projects and efforts they had done over the past few days – something that they hope would cheer on the group in the midst of recent events and remind them that they will always answer yes to the question “are you there?” – and that they’ll continue to have the same answer for as long as it takes.

Cover photo credit: Left (screenshot of the billboard from the Philippines) from MONSTA X Philippines and Right (post-it messages and fan gathering) from Hellokpop

**For those with upcoming/finished projects and gatherings that were not featured in this list, please feel free to give us a holler at @hellokpop on Twitter and we’ll do our best to include you in this list!

We need your support! If you have enjoyed our work, consider to support us with a one-time or recurring donation from as low as $5 to keep our site going! Donate securely below via Stripe, Paypal, Apple Pay or Google Wallet.
2.9k
SHARES
FacebookTwitter
SubscribeGoogleWhatsappPinterestDiggRedditStumbleuponVkWeiboPocketTumblrMailMeneameOdnoklassniki
Related Itemsmonbebemonsta xwonho몬스타엑스원호
← Previous Story K-Pop Comeback Spotlight: HyunA Blooms With “Flower Shower”
Next Story → K-Pop Comeback Spotlight: VICTON 5th Mini Album “Nostalgia”