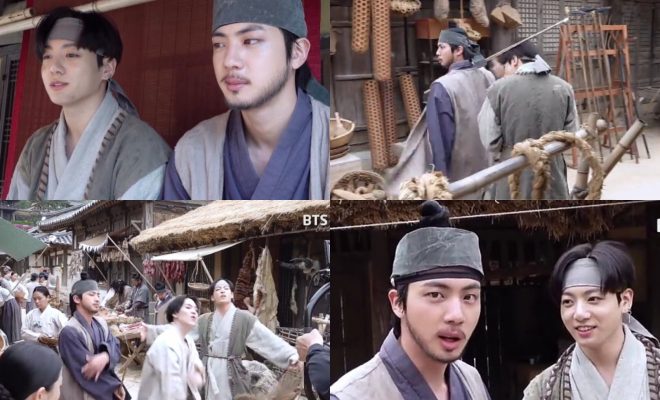 By Lilly | May 25, 2020
98
SHARES
FacebookTwitter
SubscribeGoogleWhatsappPinterestDiggRedditStumbleuponVkWeiboPocketTumblrMailMeneameOdnoklassniki

BTS’ Jin and Jungkook are not only great vocalists, but they are also excellent actors.

On May 22, BTS’ Suga surprised everyone as he released his second mixtape, D-2 under his alias of Agust D through various music streaming sites. Along with the mixtape album, he also dropped the MV for the title track, “Daechwita.”

Immediately after release, the mixtape as well as the MV received massive responses from fans all over the world. Fans were in awe at the raw emotions evoked from the lyrics as well as the cinematic brilliance of the music video.

Set in the historic era as the background, Suga portrayed two characters. He plays a powerful king and a rebellious peasant. This depiction sparked various theories about the backstory behind it.

One particular detail that did not stay amiss from the eyes of ARMY was the special appeaeances of BTS’ Jin and Jungkook. 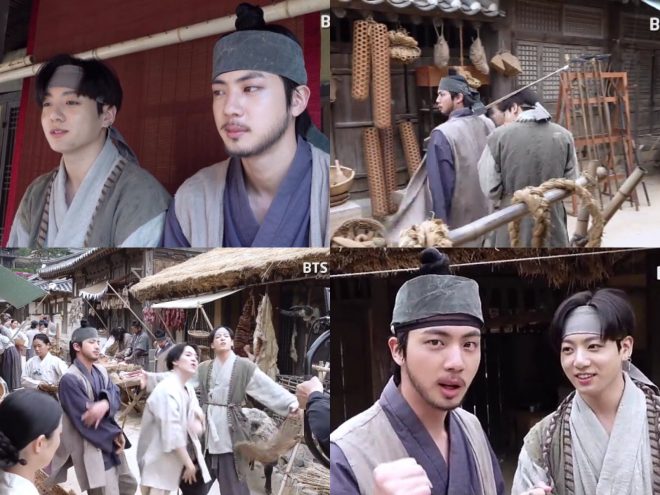 In the video, as the peasant Suga goes about rapping in the marketplace, he hits Jin slightly who looks back at him. But at the same, he accidentally ends up hitting Jungkook and they end up brawling.

Fans found it funny yet endearing at the same time. Therefore, there was curiosity about the behind-the-scene episode of that shoot.

Behind-the-scenes from the shooting

Soon, the prayers were answered and on May 24, BigHit dropped the shooting sketch for “Daechwita” MV. It was uploaded on the group’s YouTube channel, BANGTAN TV and it captures Suga working hard during the MV filming.

The BANGTAN TV episode also shows Jin, Jungkook and J-Hope who were visiting Suga. Dressed in their outfits for the music video, Jin and Jungkook introduce themselves as the background talent.

Jungkook tells to not think of them as BTS but rather refer them as actors, Kim Seokjin and Jeon Jungkook. Additionally, Jin shared that it was Suga who requested to appear on the video.

Following that, the episode shows the scene featuring the two actors with two alternate scenarios. Finally, the duo wrap up the recording by cheering for Agust D and “Daechwita”.