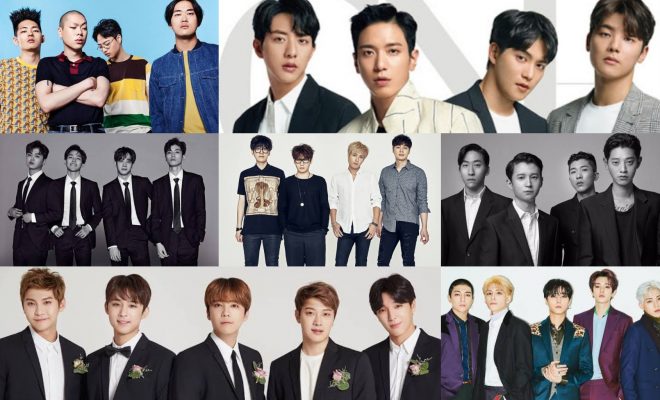 Let’s welcome March with our list (and special playlist) of our favorite songs by a South Korean band!

After taking a short break for the months of January and February, our monthly Staff’s Picks offering is back with another list and playlist of our staff members most favorite songs in different categories.

For the month of March, we thought hard, reflected so much, and narrowed down our choices to each of our top three picks of our all-time favorite songs by South Korean bands.

So, read on, nod in agreement or shake your head in bewilderment (We hope not!), and get to know us better through our choices and curated playlist of our top songs by South Korean bands at the end. PLUS, check out and join our giveaway!

“More Than You” by CNBLUE

To be completely honest, I am a big fan of CNBLUE since its debut in 2010. There is so much about the band’s music that I love especially when it comes to versatility. I am in love with Jung Yong Hwa’s somehow rough vocals which perfectly harmonizes with Lee Jong Hyun’s emotional voice.

And the song “More Than You” from the Re:Blue album launched in 2013 is one of the best examples of such quality harmony. Jong Hyun’s seemingly melancholic singing starts off the song, with Yong Hwa meeting him by the end of the first verse before he brings in his own sound in the next part. Moreover, the lyrics are heartbreaking.

No, guys. This is not a CNBLUE special. But, I firmly believe CNBLUE’s Japanese-language released deserve a shout-out — loud and clear to reach more people’s awareness that such great songs do exist. Feels aside, another song that occupied my top three picks is “Radio” from the Wave album released in 2014.

The song pumps you up from the get-go, a go-to energy booster to perk you up for a slow Monday morning. The best thing about this song is you can appreciate all the instruments because, I’m not sure why, but I can hear them loud and clear — not in a noisy way. I also love the short vocal break towards the end because it allows you to fully submerge yourself into the beats.

“You Were Beautiful” by Day6

My most favorite thing about Day6’s songs are their lyrics — and “You Were Beautiful” quickly jumped into my most-listened song last month thanks to its painful lyrics and its relation to my favorite Day6 music video “Congratulations”.

For the last time / Your eyes that looked at me / Your voice that said, take care / Everything, everything / Even that, to me

You were pretty / The feeling of not wanting anything more / Moments that only you gave / Everything, everything / Everything has passed / But you were so pretty

By the way, the song has an English version, but I prefer the Korean version because I feel more pained listening to it. But, no worries. We added it in the playlist for you to listen.

“She’s In The Rain” by The Rose

The moment I hear the intro to “She’s In The Rain”, there’s only one thing that keeps repeating in my mind —”It hurts.” The smooth and solemn combination of Dojoon, Hajoon, Woosung, and Jaehyeong’s vocals suited the song perfectly and evoked the emotions its lyrics wanted to portray so effectively.

I’m dying inside / I wanna think that it’s a lie / Why? / Why? / I scream and shout yet there is no answer / A pouring loneliness / In the rain, rain

This was the first ever song from The Rose I heard. It had me searching for the band’s entire discography right after. Just like its title, the song is a must-listen-to during rainy days. I know it’s summer season right now, but trust me when I say, you are going to want to save this song on your playlist for future reference.

The first thing I thought when I first heard this song was “Wow, that’s a bit cruel.” However, I also realized that “Hey, this is totally a thing that happens in real life and we can’t deny it.” “How Can I Say” shows the other side of the coin during breakups and tries to face us with the harsh truth that, sometimes, love just fades away. It’s not anybody’s fault.

The song had me thinking, “Well, how do you say?” after my first listen — that is, once I stopped thinking about how awesome the guitar riffs in it was.

As per BTS’ RM and INFINITE’s Sunggyu’s recommendations and Wanna One’s Lean On Me unit’s introduction, I started listening to Nell’s songs. I’m so glad I did, especially because of this song. “Let’s Part” is so beautiful and calming, yet its lyrics contain so much depth and emotions.

It made me cry by breaking my heart right away — just like how a lot of Nell’s songs do too. Proceed with caution if you’re planning to listen to Nell’s songs while mending a broken heart because, I promise, the pain will get way too real.

“When You Love Someone” by Day6

As I ventured deeper into the K-Pop community, I discovered this band. I was used to seeing boy groups and girl groups everywhere that seeing and listening to an actual band proved to be refreshing. Day6 made me fall in love with their music every I listen to them.

I listen to this song to unwind since the riff and melody is very relaxing. It was when I read the lyrics that I realized how the song is so much deeper that what’s displayed on the surface. You should listen to this when you feel that you’re starting to fall in love with that special someone a little bit more.

“She’s In The Rain” by The Rose

By now, you may have noticed that I like acoustic very much. This band is a shiny diamond hidden from the spotlight. They write songs that really speaks to your heart. I found them through Day6, discovering that the two bands are good friends with each other.

“She’s In The Rain” is a rock ballad  that hits my heartstrings the right way. It hits close to home as it reminds me of the struggles I experienced and how I overcame it. The Rose have released hit after hit and this latest one tops the rest of them.

Day6 yet again concludes my list. Like Danica, I really have their songs on repeat. Most especially if I feel very emotional that day. However, as a very versatile band with one of the most unique energies woven into their tracks, they can also deliver classics like this.

“Chocolate” is a feel good song. By the time the song is over you may have probably bobbed your head with it or even danced along to the chorus. Day6 delivers good vibes and sunshine through this song. It is very fitting to the atmosphere of the web drama series it was made for. “Chocolate” is as youthful as the cast of Want More 19 on PlayList Global’s YouTube channel.

“I Hope” by FTISLAND

My current interest in Korean music is owed greatly to FTISLAND. I absolutely adored Hongki’s voice because I have never heard anything like it, and their concepts were something I wasn’t accustomed to. Their music gave me a little break from the mainstream, even if I only got to appreciate their music for the way it sounded and not what it said.

The band has a lot of good songs, but “I Hope” holds a special place in my heart because it’s one of the first songs I heard before I got into K-Pop. Their retro music video was something 2009 Angela looked forward to at MYX every afternoon. Now that I’m a little older, I’ve been paying more attention to the lyrics, which takes my breath away. My personal favorite line of theirs is “You are my love that the heavens have granted, / you’ve only lost your way for a little while.”

“Comes and Goes” by hyukoh

I guess that’s why I like “Comes and Goes” so much. On a good day, I’ll jam to their catchy instrumentals on my way to school or when I’m walking to work. When I’m feeling down, I’ll start paying attention to the lyrics: which tell me that people won’t stay forever and that’s okay. Not everyone is meant to stay in your life, and I guess that’s a good reminder everyone just needs to have in their lives.

“Ain’t I Good To You?” by Drug Restaurant

“Ain’t I Good To You?” was a song I listened to a lot during a pretty low point in my life. The song talks about a person questioning whether or not they’ve been good to the people in their life, which I resonated with a lot. I promise I’m not this sad in real life, but there are just days where you feel like that sometimes.

Listen to all our picks of songs by South Korean bands in our specially curated playlist here:

WIN a three-month Spotify premium subscription code by simply commenting down your favorite song by a South Korean band.

ONE WINNER will be chosen from the pool of qualified participants through a random draw.

Winner announcement will be on March 7 at 5 p.m. KST.