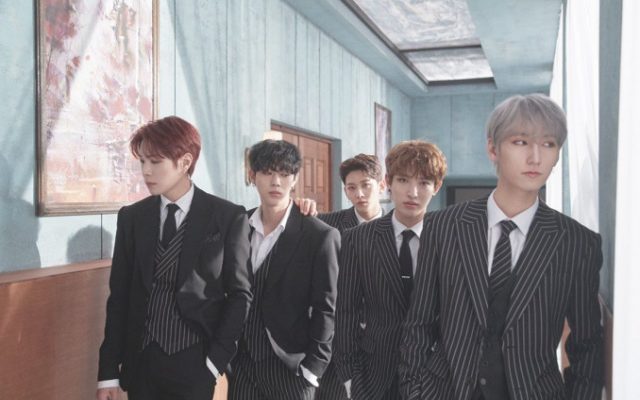 K-Pop Comeback Spotlight: UNVS – 2nd Single Album “Soundtracks for the Lost & Broken: Give You Up”

The entire universe needs to listen to this new single album from UNVS right now.

UNVS captured the stories of wandering and hurt souls in their latest single album Soundtracks for the Lost & Broken: Give You Up and its title track “Give You Up”, whose addictive melody had successfully showcased the quintet’s timeless talents. 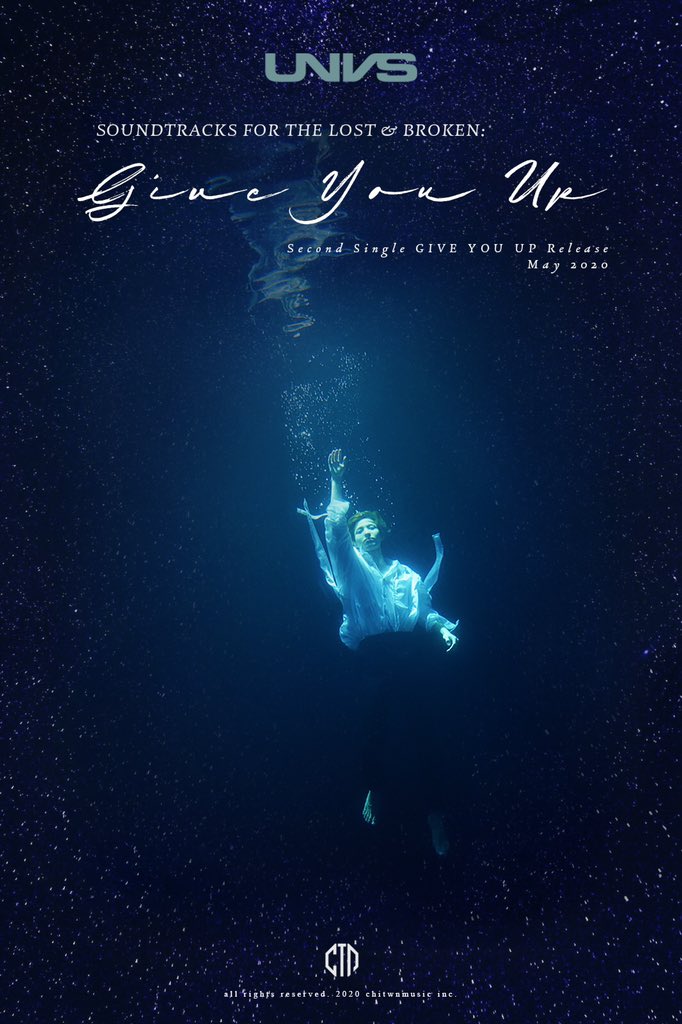 UNVS signalled their comeback on April 19 with a stunning and dramatic title poster containing the main details of their single album. They then immediately followed up with a schedule image on April 22 to help fans keep track of their teaser releases prior to their return. 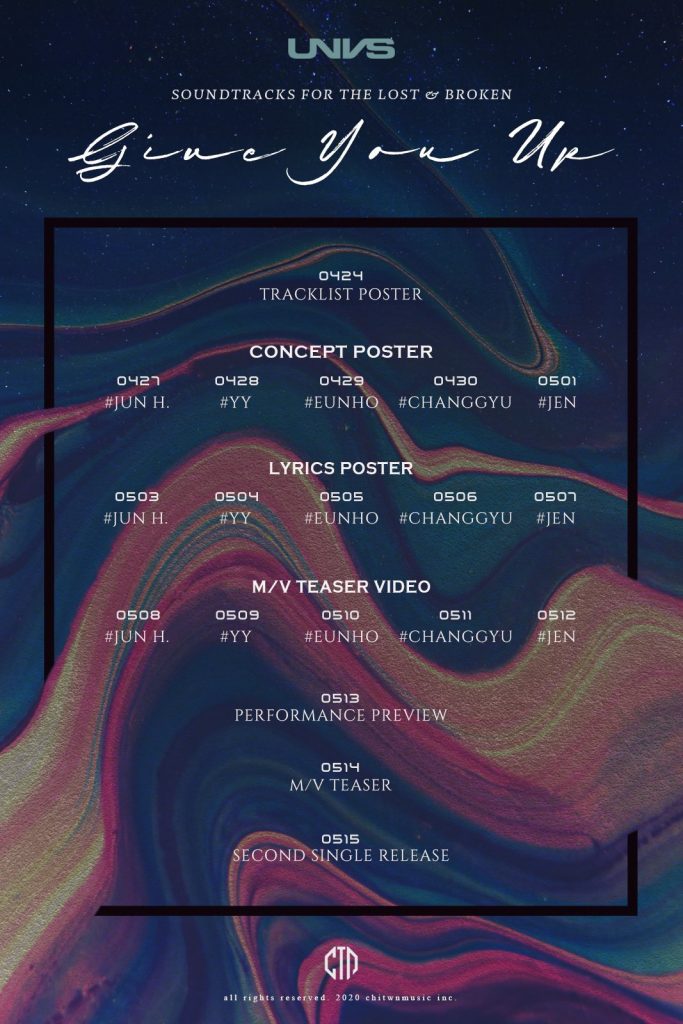 The group then released their tracklist poster on April 24, informing fans that their second single album will be headlined by the track “Give You Up”. Moreover, it will include a solo song from Eunho as a b-side track. 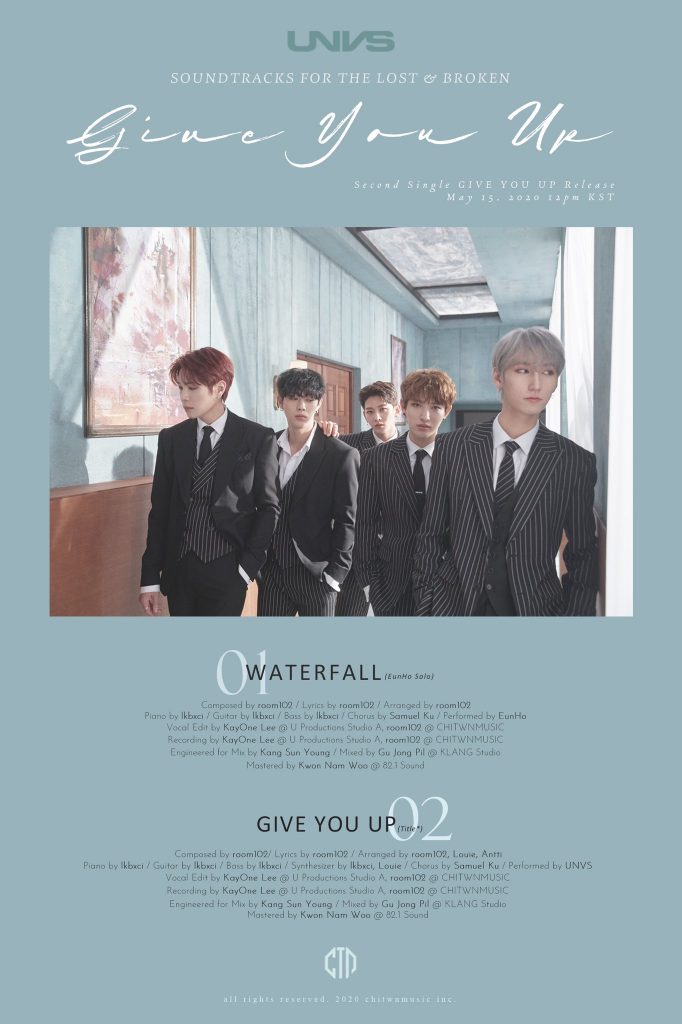 From April 27 to May 1, each of the quintet’s members starred in their solo concept posters as well. All five snapshots drew interest from fans and peaked their curiosity as it showed the eyes of the members drawn over. 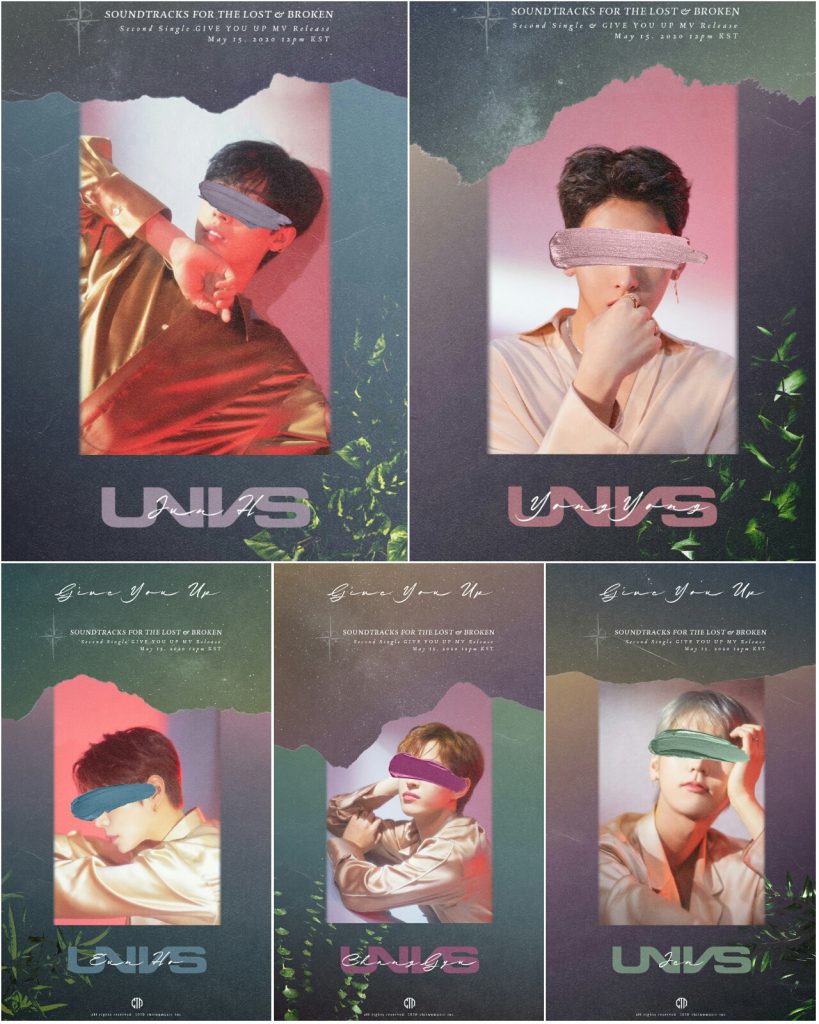 They then shared some lines from their songs through lyric posters, which also featured one member each from May 3 to 7. 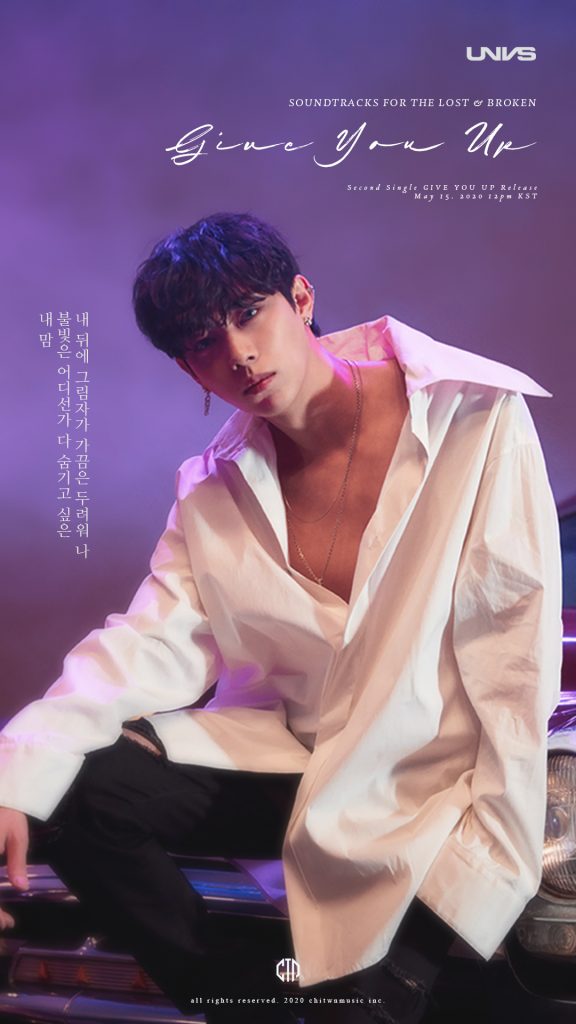 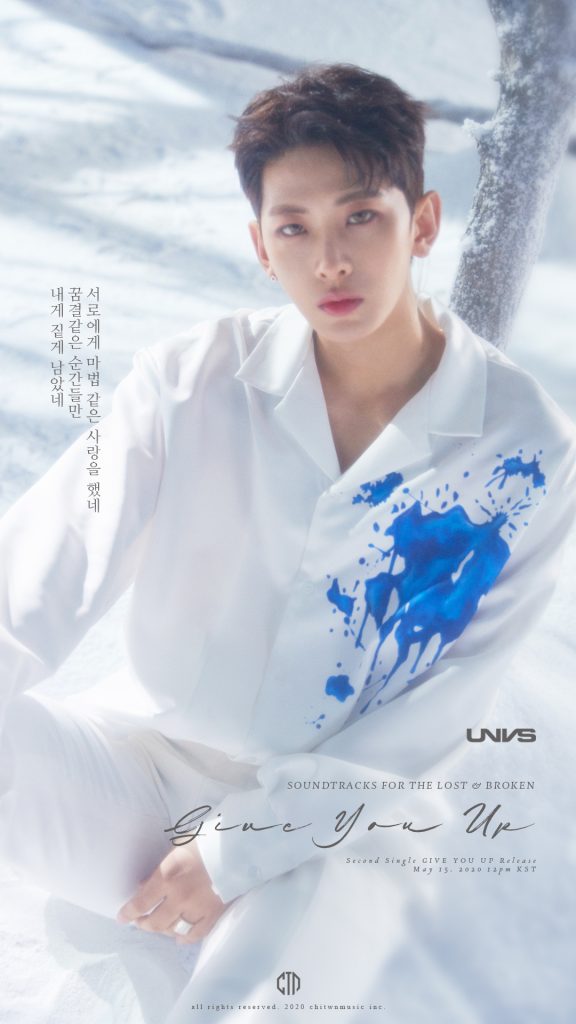 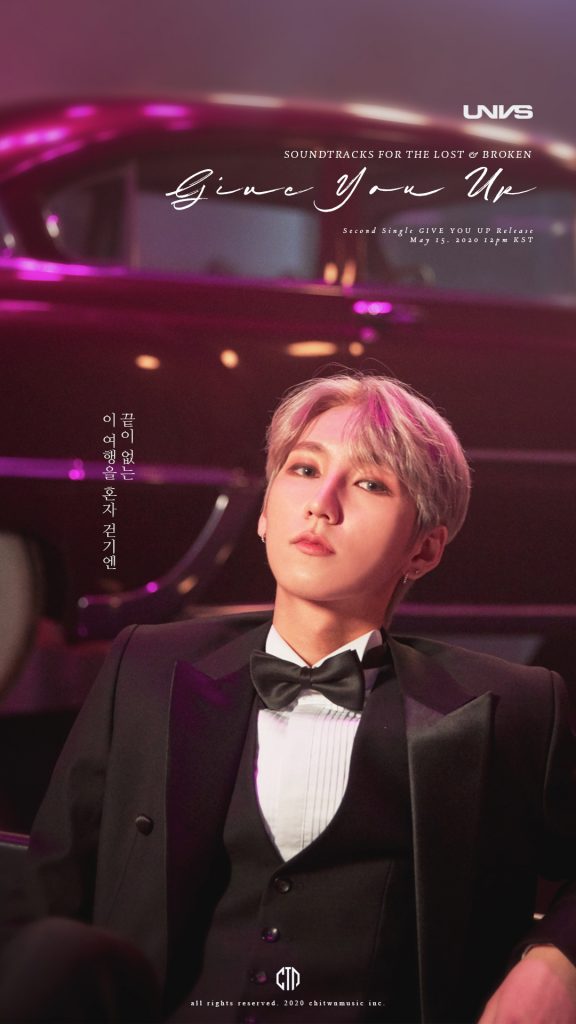 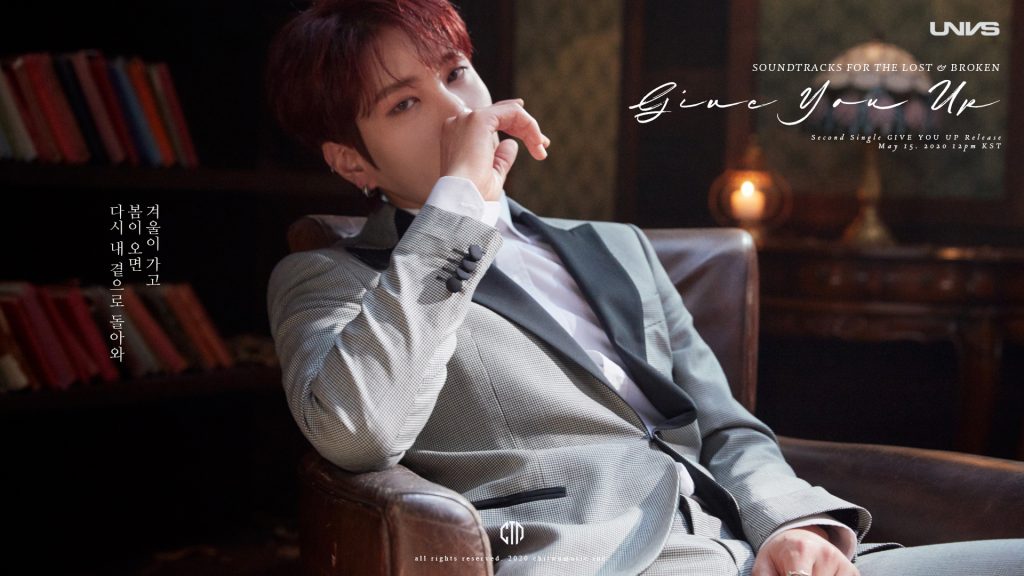 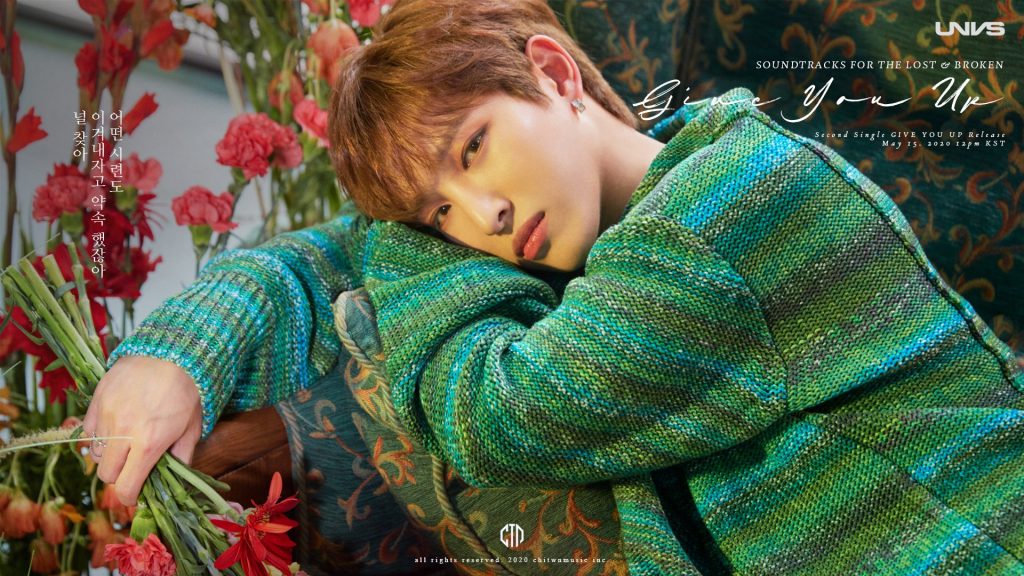 Another set of individual releases featuring Jun H, YY, Eunho, Changgyu, and Jen was then received by fans—this time, through music video teasers from May 8 to 12.

On May 13, UNVS released their eye-catching performance preview which further hyped fans up for their comeback.

A group music video teaser was then unveiled by the quintet on May 14, the day before they officially released Soundtracks for the Lost & Broken: Give You Up.

Soundtracks for the Lost & Broken: Give You Up First Impression

Soundtracks for the Lost & Broken: Give You Up contains two splendid songs: its title track “Give You Up” and Eunho’s solo song which serves as the single album’s b-side, “WATERFALL”.

Taking the main spotlight, “Give you up” is a pop/EDM song which contains a hip-hop rhythm and powerful future bass sounds. Its overall feel, together with its lyrics, expresses the hope to overcome the pain of parting which was comparable to a cold winter. The words to the song also melted the hope of meeting the person—that one has lost before—again like a warm spring.

With the start of the grand orchestral arrangement, the song’s beautiful melody was further amplified by the lyrical guitar and percussion sounds in the background. The intense bass lines and melodic lead synths also added to the euphonic feeling conveyed by the members’ sweet voices in the chorus which definitely left a strong impression.

Meanwhile, Eunho’s solo song “WATERFALL” showcased a different musical appeal to him. The group’s main vocal proved why he owned his position with a showcase of his breathtaking voice which portrayed the heartstring-tugging emotions of the song very well.

“It’s raining like a waterfall/ I can’t do it without you/ I’m up all night thinking about you,” he sang with so much remorse echoing from his voice—and we don’t know how one can not feel heartbroken after listening to this song.

“Give You Up” MV Afterthoughts

Eye-catching is definitely an understatement for “Give You Up”, because the sheer quality of both the music video and the song had me floored. The settings for “Give You Up” also had a wide range—going from cold snowy areas, to colorful spaces in cities, and even to a mysterious and warm-hearted space.

Not only did the members harmonize with each other musically, but watching them project their captivating charisma and a deadly atmosphere together also made their chemistry as a group shine.

Overall, “Give You Up” showcased the huge potential of UNVS and proved their capabilities in various aspects once again. Furthermore, Soundtracks for the Lost & Broken: Give You Up makes you look forward to what the group can offer—because they surely showed an amazing round of talents with this latest release.

Photos and videos from CHITWN Music