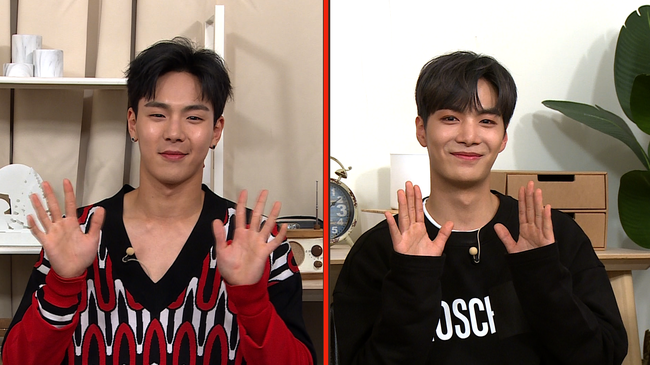 By Yann | May 24, 2020
32
SHARES
FacebookTwitter
SubscribeGoogleWhatsappPinterestDiggRedditStumbleuponVkWeiboPocketTumblrMailMeneameOdnoklassniki

Two of the K-Pop scene’s reliable leaders, Shownu of MONSTA X and JR of NU’EST, took on a challenge in their latest variety show appearance!

MONSTA X’s Shownu and NU’EST’s JR are appearing as guests in the upcoming episode of Problem Child In House where they will be putting their knowledge of general information to the test.

The KBS 2TV’s entertainment show will be welcoming the leaders of MONSTA X and NU’EST in yet another trivia-filled episode!

However, sensing awkwardness between the two for a moment, the hosts of the show asked them what their relationship with each other was, and Shownu and JR answered, “Just co-workers”.

Their awkward chemistry continued throughout the show as they solved the problems presented to them. When JR showed his signature apricot song aegyo, Shownu drew attention with how he wasn’t able to turn his head away.

It was also shared that Shownu learned the apricot song from JR in the end and performed it in a state of mental breakdown which gave everyone laughter once again.

The MCs also made Shownu and JR sweat as they conducted a “We hope you’d be close” operation by making the two shy leaders look at each other.

Ensuring a fun-filled episode, more details about Shownu and JR’s guest appearance on Problem Child In The House will be revealed on its broadcast this May 25 at 8:50 PM KST.

Hellokpop, as an independent Korean entertainment news website (without influence from any agency or corporation), we need your support! If you have enjoyed our work, consider to support us with a one-time or recurring donation from as low as US$5 to keep our site going! Donate securely below via Stripe, Paypal, Apple Pay or Google Wallet.
32
SHARES
FacebookTwitter
SubscribeGoogleWhatsappPinterestDiggRedditStumbleuponVkWeiboPocketTumblrMailMeneameOdnoklassniki
Related ItemsJRmonsta xNU'ESTProblem Child In Houseshownu
← Previous Story K-Pop Comeback Spotlight: UNVS – 2nd Single Album “Soundtracks for the Lost & Broken: Give You Up”
Next Story → MONSTA X Pumps Up Excitement With Fascinating “FANTASIA X” Album Preview