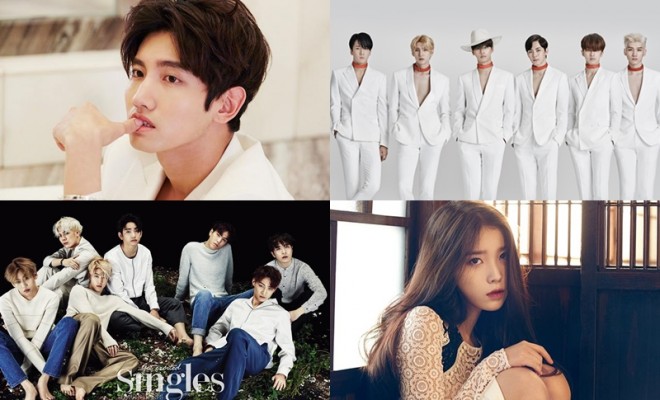 Korean artists coming out with Mandarin versions of their original Korean tracks is no surprise to most fans, but we still appreciate their thoughts to do so.

When an artist or a group holds a fan meeting or showcase in a Chinese-speaking country, the artists will start picking up some Mandarin and Cantonese phrases so they can communicate better with the local fans. Or even greater, the artists will prepare a special stage: performing Chinese covers.

Most of the times, we will be amazed how well they actually sing in Chinese. Fans appreciate the effort, the work, the thoughts and the time they have put in to perform a brand new cover song, in a language that they are not familiar with.

Let’s fall in love with their vocals together! (The original song is linked to each song title)

I fell in love, instantly.

Although this is a really a short one, still good job singing to the theme track of Taiwanese movie Our Time.

Fellow members BamBam and Yugyeom also teamed up for Beautiful by Wang Lee Hom, while Mark and Jackson took their spin on Jay Chou’s Silence with an English rap section added.

Instead of a Mandarin song, IU challenged herself with a Cantonese track Wedding Invitation Street by Kay Tse, at her fan meeting in Hong Kong. She also performed a Mandarin track Zebra, Zebra at Beijing.

The pronunciation is so on point.

So impressive. This is a duet track by two really senior artists, Sandy Lam and Jonathan Lee, released in 1992.

Ryeowook and Chen were in charge of vocals, while Eunhyuk showcased his rap.

This rendition is an amalgam of Korean and Chinese.

Bringing back all the nostalgic memories.

Song Jihyo – You Are So Cute by Kenji Wu ft. Song Jihyo

She did not just star in the MV, but also showed her vocals in a few lines.

Suzy must have practiced a lot, til the point Show Lo complimented her.

Drop us a comment to let us know which ones you like, and also if we missed out any great performances.