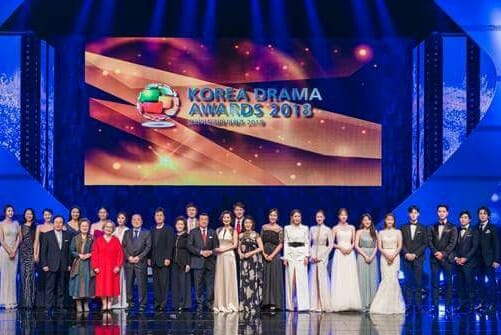 To celebrate the thriving industry of Korean dramas, the 2018 Korea Drama Awards had named some of this year’s best TV programs!

The Korea Drama Awards was held on October 2 at the Gyeongnam Culture & Art Center, marking its eleventh year of being celebrated.

The ceremony was tasked to name the best dramas and performances from Korea’s three largest networks – KBS, MBC, and SBS – as well as cable channels like JTBC and tvN.

The KBS drama Marry Me Now, which ran from March to September 2018, was the night’s biggest winner, bagging four awards. Besides the Best Drama Award, Marry Me Now was also given the Best Script and Best OST awards. Actor Yoo Dong Geun also bagged the Grand Excellence Award for his performance in the drama.

Besides being idol-actors, ASTRO’s Cha Eunwoo and 2PM’s Chansung also shared a similarity during the ceremony: they both took home two awards each!

Both were winners of the Hallyu Star Award, and Chansung claimed the Male Excellence Award for his role in What’s Wrong With Secretary Kim. He shared this award category with fellow winner On Joo Wan for Man Who Sets The Table.

Meanwhile, Eunwoo grabbed the Best New Actor Award for his standout performance in the recently-concluded My ID Is Gangnam Beauty. His co-star Jo Woo Ri snatched the Star of the Year award as well for her role as the show’s main antagonist.

Chae Jung An’s performance in Suits did not go unnoticed as she bagged the Female Excellence Award, as did Seo Eun Soo for My Golden Life, who took home the Best New Actress Award.

READ: 6 Lessons On Love, Moving On And Choices We Learned From “Suits”

Do you agree with the winners of the 2018 Korea Drama Awards? Let us know by leaving a comment below, giving us a holler on Facebook, or tweeting us at @hellokpop!

Hellokpop, as an independent Korean entertainment news website (without influence from any agency or corporation), we need your support! If you have enjoyed our work, consider to support us with a one-time or recurring donation from as low as US$5 to keep our site going! Donate securely below via Stripe, Paypal, Apple Pay or Google Wallet.
FacebookTwitter
SubscribeGoogleWhatsappPinterestDiggRedditStumbleuponVkWeiboPocketTumblrMailMeneameOdnoklassniki
Related Items2PM Chansungastro cha eunwookorea drama awardsmarry me nowmy golden lifemy id is gangnam beautyShould We Kiss FirstSUITSwhat's wrong with secretary kim
← Previous Story Wanna One To Stage Final Comeback In November
Next Story → K-Drama Premiere: “The Beauty Inside” Awes With Standout Love Trajectory