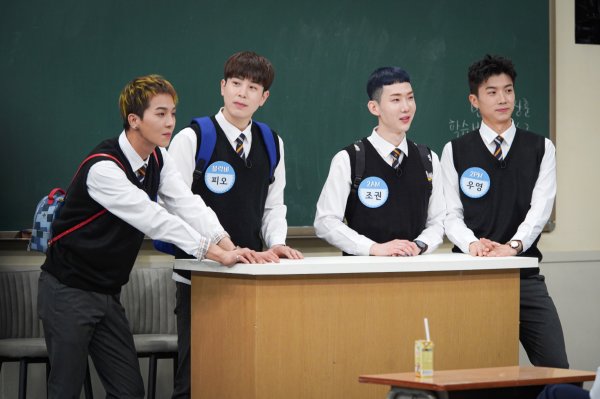 It was a lot of fun as a group of friends had staged an entertaining performance together in Knowing Brothers. 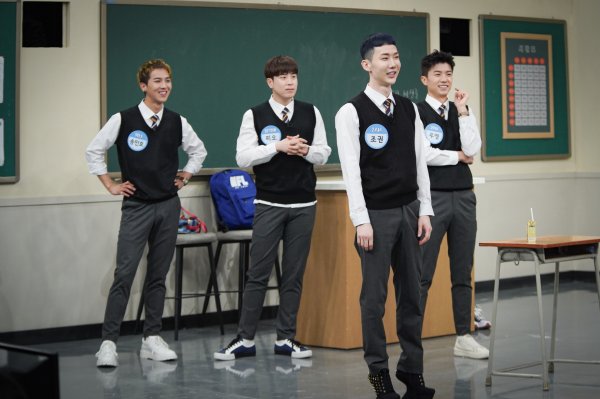 P.O and Mino appeared relaxed as the two friends were shooting the show together. On the other hand, this was Jo Kwon and Wooyoung’s first entertainment program after their military discharge and they could not hide their excitement by running around the classroom. Wooyoung said, “I feel like my tears are going to come out when I see faces that I haven’t seen for a very long time.”

The transfer students then proceeded to perform their hit songs one after another. Wooyoung showed his dance moves from 2PM’s hit songs “Again & Again” and “Heartbeat”. Thereafter, Song Mino reinterpreted the dance of “Heartbeat” in his 2020 dance version.

In addition, Min Kyung Hoon, who holds the title of dancing machine in Knowing Brothers, also shook his leg to “Heartbeat”, adding to the laughter-filled content for the viewers.

Jo Kwon also displayed his sense of entertainment living up to his nickname of Kkap Jo Kwon (energetic Jo Kwon). He danced to his song “Animal” wearing high-heeled shoes and showed a gorgeous dance performance earning the admiration of everyone. Additionally, he confidently danced to Chung Ha’s “Gotta Go”.

Finally, known for their friendship in the industry, the duo P.O and Mino performed their song “Promise”.

“Promise” featuring Mino was the title track of P.O’s album Tony Lip, which was released on July 2019. This performance was also extra special as it was the first time that the two friends staged this song live for the first time.