The mood was pleasant as shown in the photos of the first script reading of Diary of a Prosecutor.

With much enthusiasm, Lee Sun Gyun and Jung Ryeo Won heighten anticipation to their team up in jTBC’s newest offering. 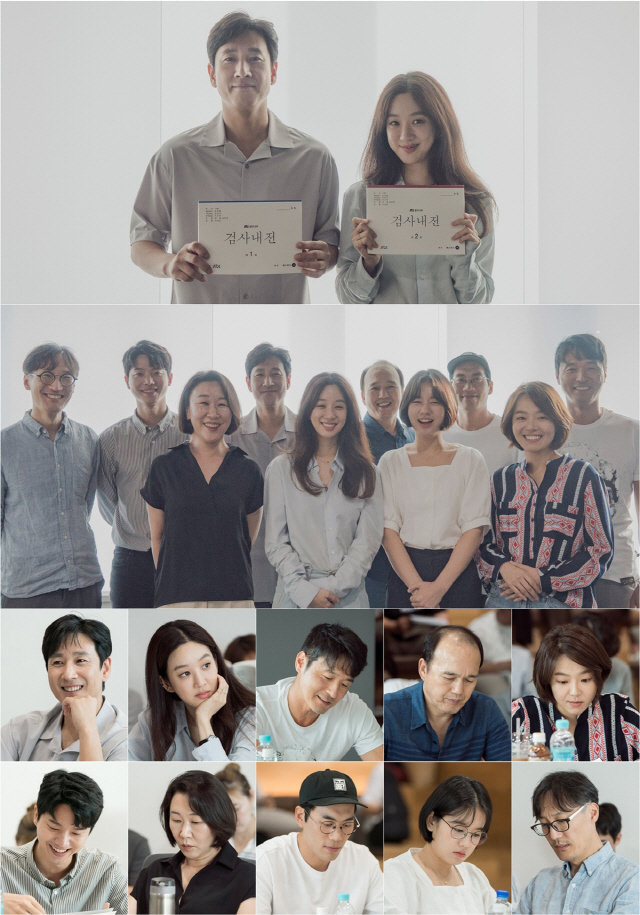 Based on the best-selling book 검사내전 Diary of a Prosecutor (working title) by Kim Woong, Lee and Jung are set to challenge what seemed to be a healing drama, depicting the less romanticized lives of prosecutors.

Held at jTBC in Sangam-dong, the main cast and production team met in high spirit. Testifying to a drama worth anticipating, Director Lee Tae Gon praises the actors who prepared their roles with great effort to complement the solid script.

Both Lee Sun Gyun and Jung Ryeo Won transform with charisma in their roles as prosecutors. The same way as their fellow cast members suit up to their characters.

A new take on prosecutor-themed drama

Scheduled to air at the end of the year, the workplace drama would focus more on prosecutors working in local districts. That being said, it will delve more on the story of the 98% office workers in the prosecutor’s office. As oppose to the usual 2% of prosecutors mostly depicted in dramas.

Notably, the stories of prosecutors who confront common and real issues that civilians bring to their work load. Expect to see legal reconciliation regarding fraud, voice phishing, neighbor disputes to name a few.

The production team remarks how in spite being the first script practice, the bright atmosphere was evident all throughout the gathering.

Backing up the production is the creative team of writer Park Yun Sun and director Lee Tae Gon. The two have worked together on the two seasons of Age of Youth. Moreover, their combined works include Beloved Eun Dong and Alone in Love. Both are well-received romance melodramas.

jTBC’s Diary of a Prosecutor is slated for December 16 premiere at 9:30 p.m.

We need your support! If you have enjoyed our work, consider to support us with a one-time or recurring donation from as low as US$1 to keep our site going! Donate securely below via Stripe, Paypal, Apple Pay or Google Wallet.
FacebookTwitter
SubscribeGoogleWhatsappPinterestDiggRedditStumbleuponVkWeiboPocketTumblrMailMeneameOdnoklassniki
Related ItemsDiary of a ProsecutorJung Ryeo Wonlee sun gyunProsecutor Civil War
← Previous Story SuperM Prepares To Take Flight In Upcoming Project Song
Next Story → MAMAMOO To Explore Parallel Realities With Upcoming Full-Length Album