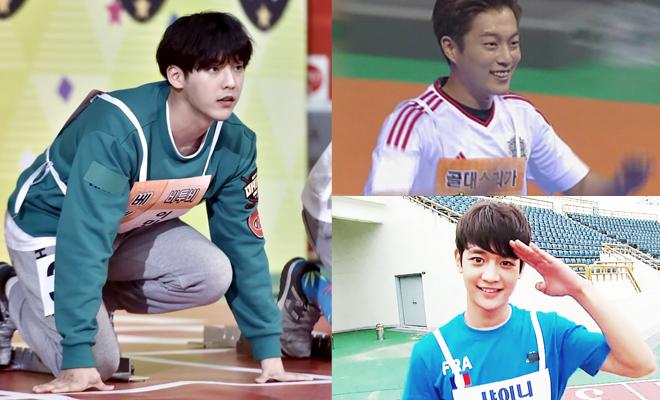 No games for now! Legendary idol athletes from past ISAC episodes will come together for a special episode!

This year’s Idol Star Athletics Championship sees huge changes and will only feature the program’s legendary idols as panelists. The semi-annual program will not have games for this year due to the pandemic caused by the COVID-19. Instead, the episodes will be in a form of MCs and the panel in which they will talk about the past ISAC games.

Hosted by Jeon Hyunmoo and Super Junior’s Leeteuk, the idols who had left a huge impact on the ISAC games will also be on the show. Known for his exemplary performance in futsal, among the idols are HIGHLIGHT’s Doojoon and SHINee’s Minho, who swooned the audience with his overflowing confidence and passion in every game.

Additionally, ISAC’s high jump and athletics record holder, BTOB’s Minhyuk, will also be a part of the panelist.

ITZY’s Yeji and Lia, APink’s Bomi, Oh My Girl’s Seunghee, and The Boyz’s Younghoon will also be included in the special episode.

According to reports, the recording had already ended. Particularly, the MCs and panelists are expected to talk and reflect on many ISAC highlights. Moments, when the previous winners set an amazing new record, will also be talked about, heightening excitement from fans who have followed the show ever since.

Idol Star Athletics Championships is a holiday special program featuring K-Pop idols in sports events. The idols will try games such as rhythmic gymnast, archery, and athletics. Since 2010, the show became MBC’s representative program, which has been organized every year during the holidays.

Last year, rather than the usual ISAC which could not film freely due to social distancing guidelines, MBC aired two spin-off shows for the Chuseok holiday season. The eSports event from the championships was turned into a stand-alone special, which aired on October 1. On the following day, idols and their pet dogs teamed up for the 2020 Idol Star Dog-agility Championships

Both competitions were held with no audience, and the participating idols were separated by protective booths as a precautionary measure.

Meanwhile, further details about the upcoming ISAC special will be revealed in the following days.