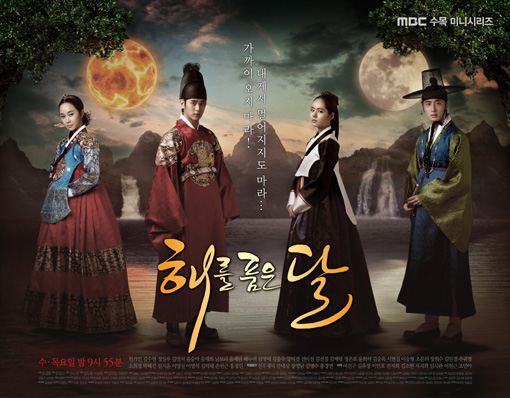 Welcome back to our 2012 In Review series! We’re done with the genre categories now, and we move on to the second arc. Today we look at a category perhaps very familiar to the K-drama and Korean film fans out there: soundtracks. OSTs help evoke emotion and dramatic effect within the medium they are used in, but many stand by themselves as worthwhile listens in their own right. You’ve already seen our other year-end series on 2012’s best dramas; I do not have such expertise in these shows themselves, so consider this a purely musical counterpart.

Note that we won’t have an albums section for this – only considering songs today. As always, honorable mention picks are sorted by alphabetical order of artist names.

Featured in 해를 품은 달 (Moon Embracing the Sun; also The Sun and the Moon)

Lyn’s been rediscovering herself lately with R&B-tinged pop, but her specialty still seems to be these big-scale ballads. Reverse the Time is in roughly the same tradition as the ballads in her The Pride of the Morning (2007), notably 이별살이 (Parted Life). It makes use of dramatic orchestration with slow build time and a punch in the refrain, and most crucially, it takes advantage of Lyn’s greatest strength as a vocalist: the tender, unforced falsetto that gives dimension to even the simplest melodies. Armed with this, the song’s well-written chorus is extremely potent even on its first appearance and explodes on repeat. It has the clichés of a historical-drama soundtrack (traditional flute, chord progression, epic scale), but its familiar components are exceptionally arranged and abnormally absorbing. Reverse the Time is the finest work of its kind.

It’s awkward when this happens: Carry On might be better than any track in ALi’s own, honorable-mention solo album. Certainly none of them have a chorus melody better than this song’s. Forget the instrumental style, which straddles an ambiguous line between straight ballad and hybrid pop. The key to this track is that soar-and-plateau chorus, which ALi performs with unshaken power. The song importantly avoids a sense of continual climax even with this thing (and similarly dramatic lyrics) dominating its length, which is a credit to the performance as well as timely “carry on” interludes punctuating high-energy sections. We end up with a ballad that has all the pros of a moving OST-style piece while avoiding the most common pitfall of over-dramatization. It’s a careful art.

Da-eul – Shining Star. Featured in 자체발광 미녀 (My Shining Girl; also Sunshine Girl). Modern-rock is a surprisingly good fit for the power vocalist.
Hyorin – 널 사랑하겠어 (I Choose to Love You). Featured in I See Love: Season 2. Bubbly pop number brings out Hyorin’s strongest vocal assets.
Jessica of SNSD & JP (Kim Jin-pyo) – 어쩜 (How). Featured in 난폭한 로맨스 (Wild Romance). It could be straight out of JP’s album, with that characteristically petulant attitude.
Jung Dong-ha of Boohwal – 애벌레 (Caterpillar). Featured in 철가방 우수씨 (Iron Bag Man). Partly an interpretation of the late Kim Woo-soo, but more an anthem of the generation.
Kim Jae-suk of Wanted – 모른다 (Don’t Know). Featured in 오작교 형제들 (Ojakgyo Brothers). Kim’s explosive performance is commendable, but the subtly detailed instrumentation isn’t slouching, either.
Koo Hye-sun – Fly Again. Featured in 부탁해요 캡틴 (Take Care of Us, Captain). The springy joy is palpable.
Lim Jung-hee (J.Lim) – 필라멘트 (Filament). Featured in Wild Romance. An energetic romp with some lyrical wrinkles.
Lisa – 출 (出) (Exodus). Featured in 인수대비 (Queen Insoo). A leaner form of the historical-OST formula, but retaining the motif of the style.
Punita – 죽을만큼 (To Die For). Featured in 와일드엔젤 (Wild Angel). The Great Birth contestant deftly handles a difficult performance in this soundtrack for a novel. (Apparently they exist.)
Seo In-guk & Jung Eun-ji of A Pink – All For You. Featured in 응답하라 1997 (Answer Me 1997). The duo overcomes a pedestrian melody with tremendous chemistry.
Seo Young-eun – 꽃이 진다 (Flower Wilts). Featured in 후궁: 제왕의 첩 (The Concubine). The “queen of OST” adds another notch to her résumé.
Vivid – 무서운 이야기 (Horror Story). Featured in 무서운 이야기 (Horror Stories). An odd mismatch with the film’s subject matter, but it weaves its own chilling narrative.

What do your picks look like for this category? Discuss with us in the comments, and join us tomorrow in Part 9 for the year’s best in collaborations!