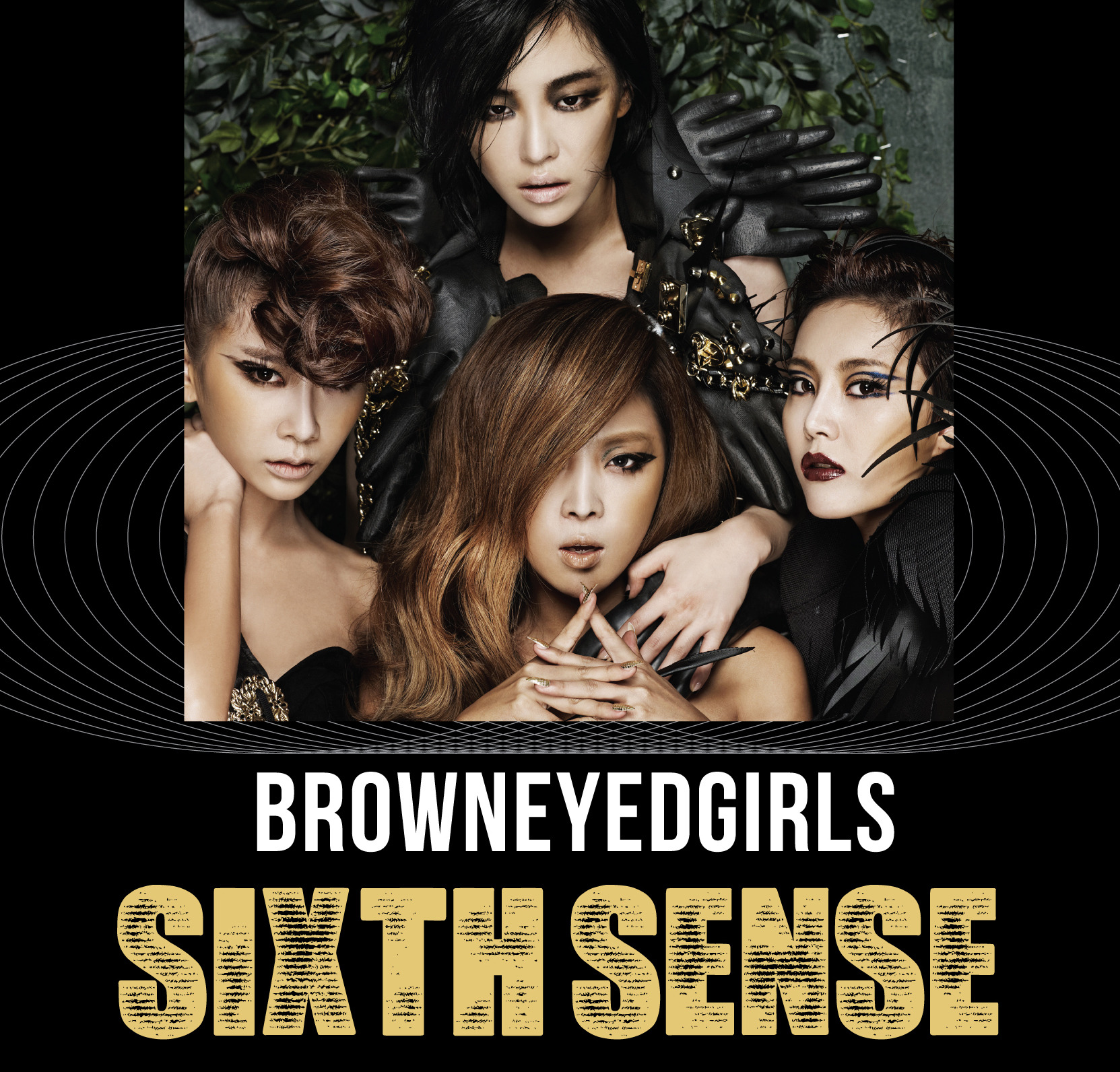 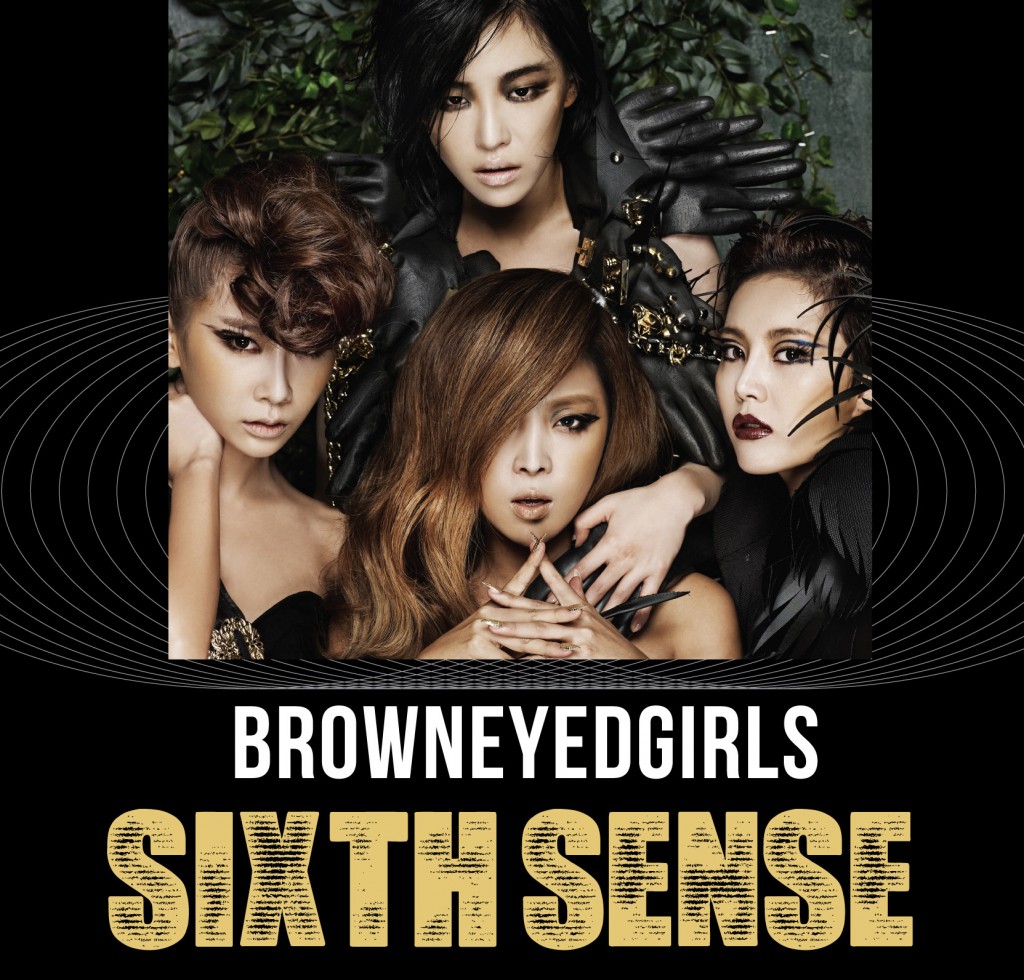 No matter how hard I try, it’s probably not possible to do this review without mentioning Sunny Hill‘s Midnight Circus from earlier this year. So let’s do that right now. Brown Eyed Girls and Sunny Hill share, at this point, multiple characteristics. Both are members of the Loen Entertainment – Nega Network superagency, and therefore both work with the label’s composer-lyricist duet of Lee Min-soo and Kim Yi-na. Both have undergone rather extreme turnarounds in group identity – Brown Eyed Girls started as a relatively obscure hybrid-soul group in 2006 and became an industry leader in electronic pop/dance, while Sunny Hill started as an even more obscure pop-ballad group in 2007 and became… well, the jury’s still out on what to call them now, exactly. Both groups have fabulously talented vocalists, and a few of them even sound like each other. And yes, Brown Eyed Girls’ fourth studio album Sixth Sense does resemble Midnight Circus in some regards. Glad we got all this out there first.

Sixth Sense is a relentless album, intent on calling attention to itself. Note the unorthodox production: departing from the electronica standard of Sound-G, Lee Min-soo’s Hotshot distinguishes itself with a frantic Latin-dance rhythm and rich brass, while East4A-composed Lovemotion achieves the same with washed-out strings and a hypnotic electronic beat. The album covers several distinct spectra, and in terms of sound production, it grades out pretty well in all of them. Thematically, it focuses on the bold; the theatrical, the dramatic, the intense. The aforementioned Hotshot‘s alcohol-drenched lyrics are passionate and heady. Vendetta features lines of pure vitriol, poured copiously upon an anonymous (possibly political) villain, to go along with magnanimous Broadway theatrics and fickle mood changes. Sleek seduction is the tone of the day in Lovemotion, and there’s a solitary, tragic melodrama playing out in 불편한 진실 (Uncomfortable Truth). (This track immediately reminded me of – guess who? – Sunny Hill’s 기도 (Prayer), and many listeners apparently felt the same way. Both Prayer and Uncomfortable Truth are composed by KZ, so while it’s not plagiarism, it does appear that he borrowed a little too heavily from his previous work. Incidentally, some have also pointed out similarities to Shinhwa‘s Voyage (2006), and while the comparison is valid, I’d still call that one a coincidence.)

A little boldness is a good thing. But Sixth Sense falters because it goes overboard – and if you remember, that’s exactly the same problem that Midnight Circus ran into. The album’s eponymous lead single gives us a perfect example. Excess makes Sixth Sense perhaps the ‘best bad song’ of 2011, if you will.

The opening is as ambitious as it is promising. Taut strings reverberate with the cadence of drums, Jea confidently rips through the beat, and Narsha and Ga-in ante up the tension in the bridge. Things are downhill from there, though. For one, the refrain is strained, a result of too much forced power. The melody, not very appealing to begin with, quickly becomes unattractive with the front-loaded repetitions of “Pop!” Jea, who does most of the heavy vocalizing here, does deserve credit for keeping her parts controlled and not letting notes float; she’s too good a vocalist to allow that. But it sounds like the song is simply composed with these instructions, and her parts do end up contributing the most to the ludicrous over-emotion rampant in the track.

In an SMP-like display of musical schizophrenia, Sixth Sense also tries unsuccessfully to marry mismatched elements into a coherent track. The “meow” effects are comically out of place, and Miryo‘s verse, which is usually a bright spot in any track, loses all sense of flow amidst the excessive embellishments. (Still, it should be noted that her self-written verse is more lyrically coherent than any other section of the typical-Kim Yi-na-style song, and that it also clears up the song’s meaning.) Immediately after, Jea’s lengthy melisma follows, and while it’s very impressive technically, the insertion further breaks the concept of the disciplined, military-march quality of the beat. This is clearly a very complex track, and it has some potentially fantastic components, but you don’t necessarily get good results by way over-packing a track with intriguing components. Maybe this is just Lee Min-soo’s style, but I can’t say that it’s producing good results – it didn’t work well in Midnight Circus (the track), and it works even less well in Sixth Sense (again the track). The general approach is also applied to other tracks (Vendetta, for example), with unsatisfying results.

But a still graver issue plagues Sixth Sense, the album, as a whole. Where are the Brown Eyed Girls in this album? I hear their voices, but they don’t sound themselves. What we have is fierceness and theatrics, but no identity behind those things – as if the album operates with empty intensity. Miryo, as her own lyricist, injects personality into tracks, but it’s not enough; even with this much color, outside of perhaps Hotshot and La Boheme the entire album operates mechanically and with little flair. As a result, Sixth Sense feels much more like an album by Lee Min-soo, Kim Yi-na, KZ, et al., rather than a Brown Eyed Girls album. In Countdown, they sing of the album as a “truly stunning show”, and that’s exactly true. This is a show. The heart and personality of such older works like Hold The Line and Leave, Miss Kim are nowhere to be found.

Now, these are still the same four women who once produced landmark music. L.O.V.E. (2008) remains an absolute masterpiece and triumph for the Korean music scene, and Abracadabra (2009) achieved the dream combination of explosive popularity and musical excellence. As recently as last November, Ga-in surprised listeners with a sublimely innovative solo EP. There’s no reason to believe they can’t do it again, and I actually think that they will do it again. In the meantime, Sixth Sense will continue to chart well, sell well, and maybe even win awards. But I’ll be waiting for the day when the Brown Eyed Girls can once again truly “share this feeling, more than emotion” with listeners.