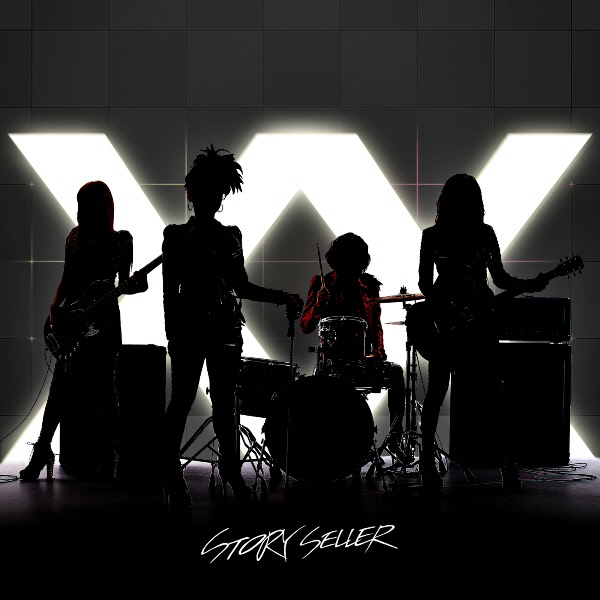 Story Seller isn’t exactly new; they’ve been around for 8 years, formerly under the name ‘Bloody Cookie’, and have experimented with a wide spectrum. From modern rock to nu-metal, to alternative to fusion punk, they’ve covered their bases. So while XX is their first studio album, it also happens to be the culmination of a career’s worth of work.

XX‘s promotional material cites the album as containing “the heaviest sound out of all Korean female bands in history”. This is debatable, but it’s not without justification. On its heaviest end, XX features satisfying pop punk sporadically backed by synths. The album is also thematically charged with strongly feminist lyrics and topics (hence the album title). Through the first three tracks, it’s a high-octane ride that combines both 18구역 (Area 18)’s assertions of personal identity play off its aggressive riffs, while abrasive synth and guitar textures power 어젯밤 그냥 (Just Last Night)‘s equally biting verdict upon one-night-stand culture. The message reaches fever pitch in 뱉어 (Spit It Out), which carries the trusty self-empowerment theme in a rougher way than usual – vocalist Binna, bluntly belts at listeners to spit things out, throw things away, and have other things destroyed. It’s vintage No Brain attitude, minus the bloodthirst.

So far, so good. But it gets more interesting, take 절대적 착시 (Absolute Optical Illusion), a rock ballad infused with electronica layers. An unsettling verse characterized by spliced beats, echoing acoustics, and complex stuttered effects builds suspense up to a stormy chorus line. The song’s potency and explosiveness, found at different parts of the song, are both brilliant, and the dramatically used strings and enveloping chorus melody are reminiscent of Mun Hee-jun‘s best works.

Absolute Optical Illusion offers a taste of exquisite darkness, and it sounds like this could actually be Story Seller’s niche. Plenty of bands and artists have put spins on feminist and empowerment themes, and many have done so better than Story Seller does. But I can only think up a handful of bands that could come close to them in this particular performance – a couple heavyweights like Jaurim and Cherry Filter would be at home thematically, but Story Seller’s electronic-reliant approach produces a uniquely compelling atmosphere, one that would give anyone a run for their money.

Curiously, we don’t see this happen anywhere else in the album. Cryptic 그녀는 (She) is at least tinged with the same kind of volatile melancholia that erupts in Absolute Optical Illusion, but it feels incomplete. Instead, the second half of XX is filled with individually decent or even great tracks, that gradually lose cohesiveness amongst each other. There’s attractive shibuya sounds in 솔직히 (Frankly), passionate energy and a rhythmic vocal performance in Serva Me, breathlessly bumping electronica in 핫팬츠 (Hot Pants), and so forth. This section sounds like an attempt to put as much of their musical diversity on display as possible, which it admittedly does; it just doesn’t help this album very much.

What does help this album are the excellent performances backing up all this flashy variety. Binna proves herself versatile, handling both sustained shouting tracks and tender, delicate melodies with flair. Her improvisations, such as the subtle but rough growls in Frankly and the viscous, loose flow in Serva Me, sound as natural as could be. Guitarists Noji and Hobak are behind the driving velocity of tracks like Just Last Night and 답답해 (Frustrated) – Loser as well as the cluttered, ambient sounds in Absolute Optical Illusion, and drummer Haneul shines in the complex beats of Serva Me on top of solid work throughout the rest of the album.

That, above all, is the best thing about Story Seller’s ‘debut’ (‘unearthing’, if you prefer). It shows that they absolutely know what they’re doing. Most recent female-band releases, such as from Wind Hold Venus, Sweet Revenge, Vanilla Lucy, and others, have failed to show this convincingly (Rubber Duckie might have been an exception), and this left a niche for a band to storm into. XX indicates that Story Seller is more than capable of filling that niche. With bold direction and execution, they’ve created a technically solid and popularly viable album. With that, they make the label ‘female band’ – often a stigma for other bands – into an asset and identity.