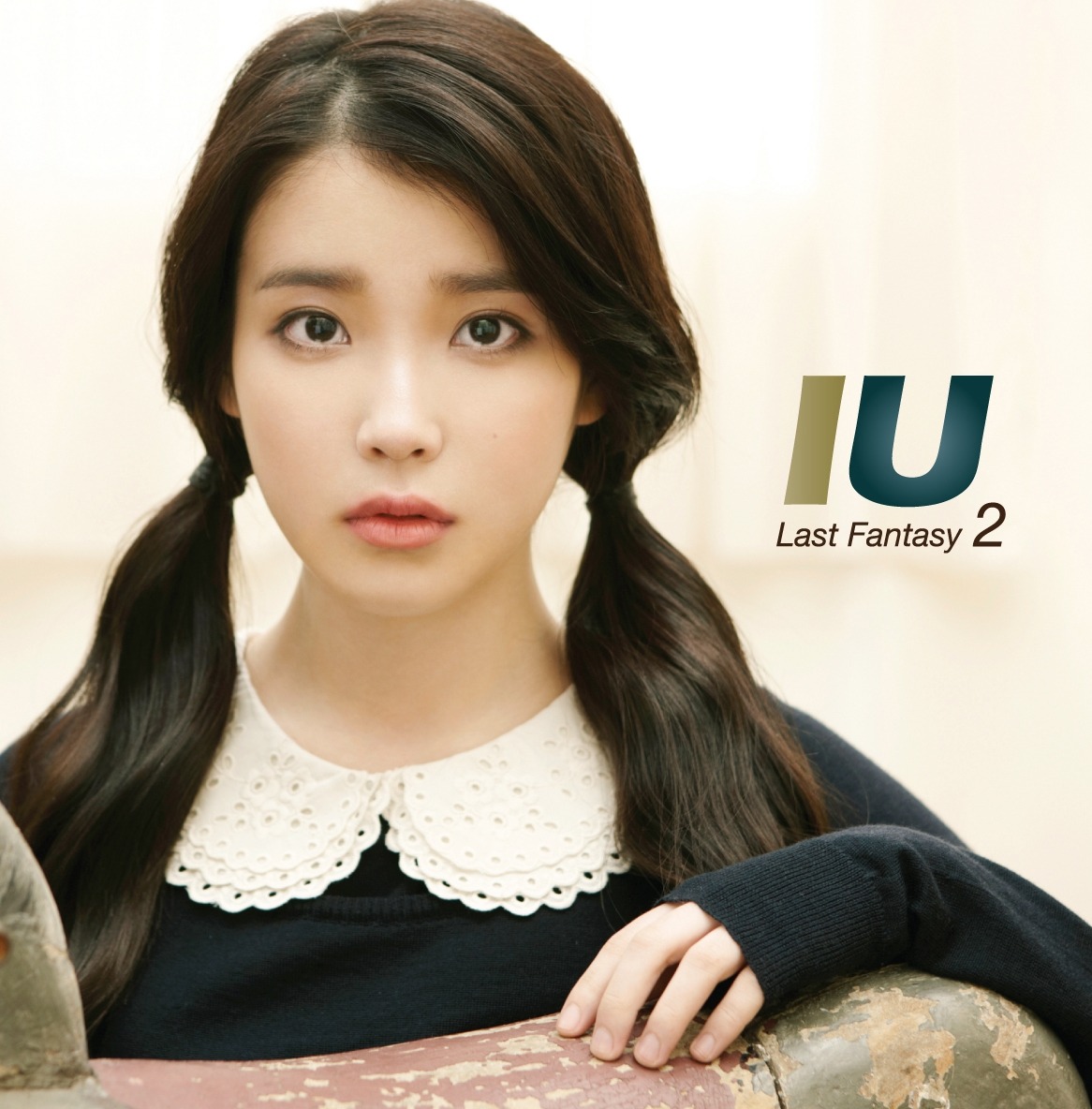 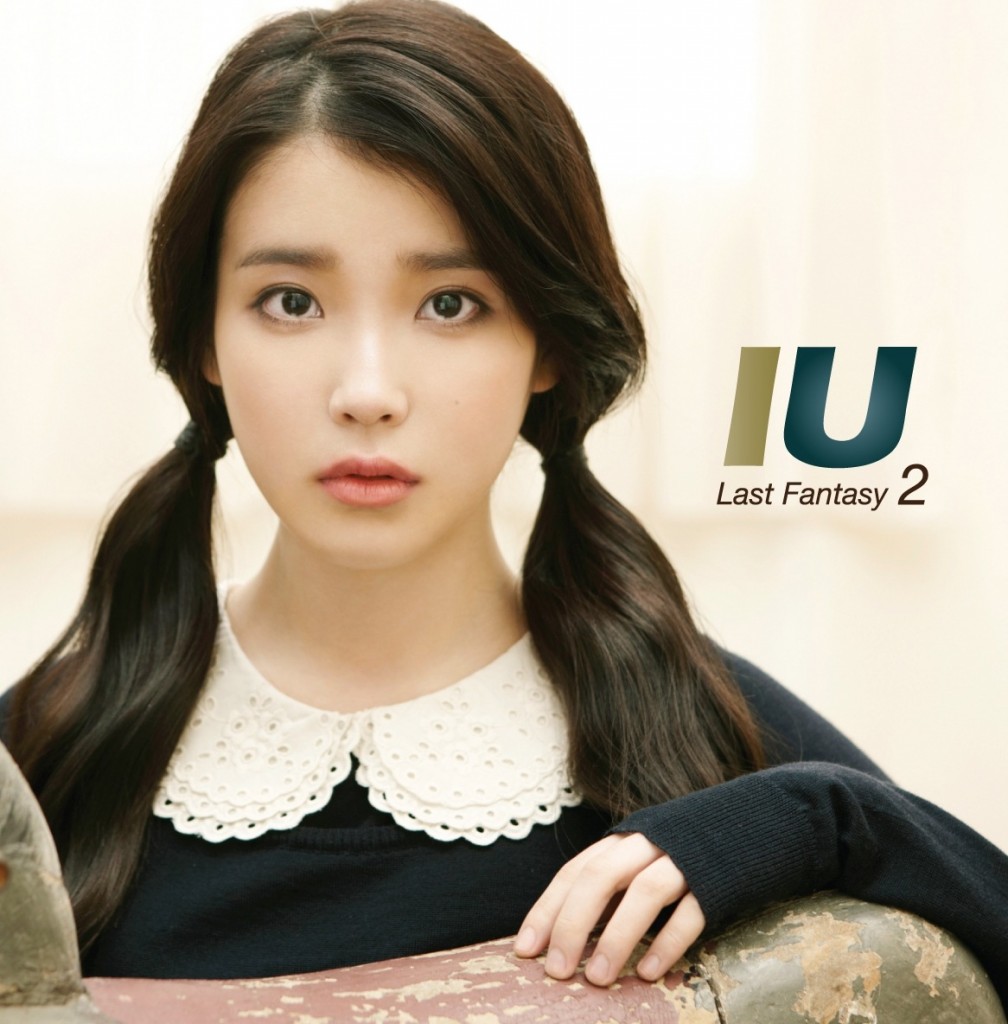 Take a look at IU‘s new album. More precisely, take a look at the list of composers. It reads like a who’s who of Korea’s most celebrated ballad composers and artists: names such as Jung Suk-won, Kim Kwang-jin, Yoon Jong-shin, Lee Juck, Kim Hyun-chul, Jung Jae-hyung, and even Kim Hyung-suk grace the staff credits, joining those of younger but still-veteran composers like Ra.D and G. Gorilla. This being an IU album, of course, music by Lee Min-soo and Yoon Sang make the requisite appearances. Oh, did I mention that Corinne Bailey Rae also wrote a track?

So Loen Entertainment pulled out all the stops while producing Last Fantasy, IU’s second studio album. This is the “more is better” philosophy taken a bit over the top; by “a bit”, I mean that the top isn’t even visible anymore. If you’ve been following Loen (and in-house affiliate Nega Network) artists closely, though, you’ll notice that the label has been trying this philosophy all year long – not so much with an all-star cast of composers, maybe, but certainly so with diverse, jam-packed sounds and themes in each album. It sort of half-worked for Sunny Hill before falling flat for Brown Eyed Girls. (Zia‘s Avancer was the exception to the trend.) Not a great track record, then. Will things be different with Korea’s most eminent young artist?

First, the most important thing: the majority of Last Fantasy‘s tracks do live up to the lofty billing. Opening track 비밀 (Secret) is far and away the album’s best song: it’s a full display of Jung Suk-won’s old penchant for massive ballads, featuring expansive instrumentation and exhilarating, layered melodies. Lyricist Kim Yi-na, whom I’ve criticized before for her overindulgent lyrics, finds a perfect outlet for her nuanced, slightly off-kilter style of writing here, turning a merely pretty tale into a stunning one. This environment seems to bring out the best in IU, as well: she’s always been more of a finesse vocalist than a power one, and we haven’t had many chances to hear her seriously project. I don’t think she’s ever done it better than she does in Secret‘s breathtaking finale. There couldn’t be a more perfect track for IU or a better opening for the album.

Not to be outdone in scale, Lee Min-soo crafted lead single 너랑 나 (You And I) in a similar vein to IU’s greatest hit, 좋은 날 (Good Day): the speedy progression, bombastic string-and-brass accompaniment, and the cutesy appeal all borrow from that song. In fact, you could reasonably call it Good Day 2 and feel okay with that. You And I has a pretty strong saving grace, though, in the fact that it’s superior in every way to its predecessor (which was pretty good itself). It tones down the mood just a tad, and introduces a hint of melancholia along with more intricate, tightly-controlled instrumentation. But most saliently, the song evokes a true, enchanting wonderment. This was the missing link in Good Day‘s festive spirit: it tried to formulate the soundscape of a winter wonderland, but was a little too lighthearted to truly get there. This time, Lee Min-soo uses a range of devices, including a grandiose introduction, mesmerizing bridges, vocal distortions, and subtle, fading embellishment effects to bolster the faintly – very faintly – melancholy melody, and it works.

One reviewer even called this song the first real attempt to bring 60s’ psychedelia into the Korean mainstream, and while I wouldn’t go so far as to call You And I psychedelic, there is a good point there – this song is significant for what it attempts to do and what it does do. Even apart from the sounds, there’s plenty of nuance in themes: the idea of a girl longing for love across temporality actually has interesting psychological stakes, and while Kim Yi-na goes a little overboard like she always does, her lyrics do capture the surreality of it all.

This kind of sophistry shows up often in Last Fantasy, and it makes a number of tracks successful. Subdued pop-ballad 벽지무늬 (Wallpaper Patterns), a Yoon Jong-shin creation if there ever was one, and dramatic traditional-style ballad 별을 찾는 아이 (Star-seeking Child) both evoke multiple layers of emotion, and 사랑니 (Wisdom Tooth) mixes up lively and lonely atmospheres.

By contrast, the album’s worst track simplifies IU’s voice and character too much: 잠자는 숲 속의 왕자 (Sleeping Prince), a remake of composer Yoon Sang’s 1997 venture (it was then sung by short-lived female duo Halo), focuses way too much on the cutesy image. IU sounds like she just inhaled helium all throughout this song. The phrasing is broken and the falsetto forced, and the end result just ends up hurting the ears. It doesn’t help that Yoon unwisely decided to meddle with his composition, replacing a punchy hybrid-techno beat with a splintered, ugly synthpop one. A couple other composers also dropped the ball: Kim Hyun-chul played it a little too safe with Everything’s Alright, which has IU cruising on autopilot with a melody that’s essentially bubblegum pop supplanted into ballad, and Kim Hyung-suk contributes an elegant but entirely predictable six-minute, Disney-style ballad in eponymous track Last Fantasy.

Is IU her own artist yet?

If you’ve noticed, all this seems to minimize IU’s involvement in her own album. Essentially, what I’ve said so far is that the good songs are good because of their composer, and the bad songs are bad also because of their composer. In light of the concern that I’ve raised before, about whether IU will be able to assert herself as an independent artist – to “take center stage” – this sounds like a bad omen. And with this star-studded list of composers, perhaps it’s almost natural for a young artist to be without agency.

To be fair to IU, she does perform admirably throughout the album: Secret is an absolute tour-de-force, and I frankly can’t imagine any other artist pulling off You And I as well as IU did. In fact, in the case of 삼촌 (Uncle), she single-handedly saves a whole song. Sure, it’s fun to hear Lee Juck rap (say what you will about his Panic days, but this is just about the last thing I expected from him) and the mini-skit is amusing, but without IU’s tasteful performance, a song this bland could have gone downhill real quick.

On the flip side of that, she does make mistakes in this album. 4AM, the Corinne Bailey Rae track, is brimming with soul – the composition is excellent. Now, while IU is normally an extremely adaptable artist, she doesn’t adapt well to this one. She tries to portray a dark, drowsy psyche with unkempt singing, but it’s forced. She audibly tries too hard – a little too much un-control, too much forced angst. She still sounds decent, with that voice of hers, but the song suffers from this performance. A similar situation almost happens in L’amant, which has similarly unconventional atmosphere, but the vocals are much more honest here – she gets to be in her comfort zone more. It is worth nothing, though, that both of these are extremely difficult songs to do right.

Still, the hallmark of a truly independent artist is the ability to do the kind of music she wants, and that ability usually manifests through composition. IU does have one self-composed song here, and it’s sublime – 길 잃은 강아지 (Lost Puppy). Predictably, it relies upon acoustic guitar (along with G. Gorilla’s fantastic supplemental arrangement) to create most of its mood, which is a heavy shade of dark, and is wonderfully expressive – the murky, immaterial melody and rhythm audibly represents loss and confusion. It confirms what we’ve known for a while: IU has more than enough potential to grow into a great singer-songwriter.

But for one reason or another (perhaps because IU herself doesn’t feel ready), she’s not being given the artistic freedom. Instead, we have this situation where the show’s star is IU, as it should be, but the star can’t pick what she wants to wear. What’s more, there are 13 different designers vying for attention. Producer Cho Young-chul‘s composer-army strategy is hit-or-miss; you either get gorgeous results or flat and ill-fitting ones, and even if they’re all gorgeous, they won’t necessarily fit with each other. Fortunately, and due in no small part to the composers’ and IU’s skill, Last Fantasy came out pretty nicely overall. It just isn’t the most coherent album.

But let’s take a step back. IU is eighteen years old. No other teenage singer in the country gets anywhere near the level of scrutiny that IU does; why? Because listeners and critics alike realize that she occupies a unique position, possessing vocal prowess far beyond most of her peer group and a mature ability to interpret music her way. The very fact that this discussion of her artistry and agency is even happening is testament to how perceptions have changed. People are beginning to see IU as an artist, not “just an idol” (in the negative sense). This change coincides in a way with what we see happening within Last Fantasy: a young artist still struggling to find her footing, but slowly and surely getting there. When we look back at IU’s discography years from now, Last Fantasy won’t be seen as the album that made her an artist; it will be seen as the album that made many of us realize that she is one already.