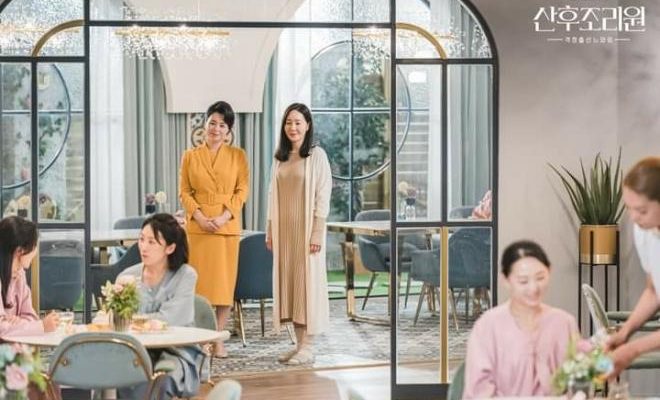 With a comical approach to a sensitive subject, Birthcare Center delivers a resounding message about what really makes a mother.

While motherhood has been one of the most common themes in dramas, talking about a mother’s mental and emotional journey after giving birth is a novel concept. Birthcare Center triumphs in its aim to delve on some topics that society would rather keep quiet about. 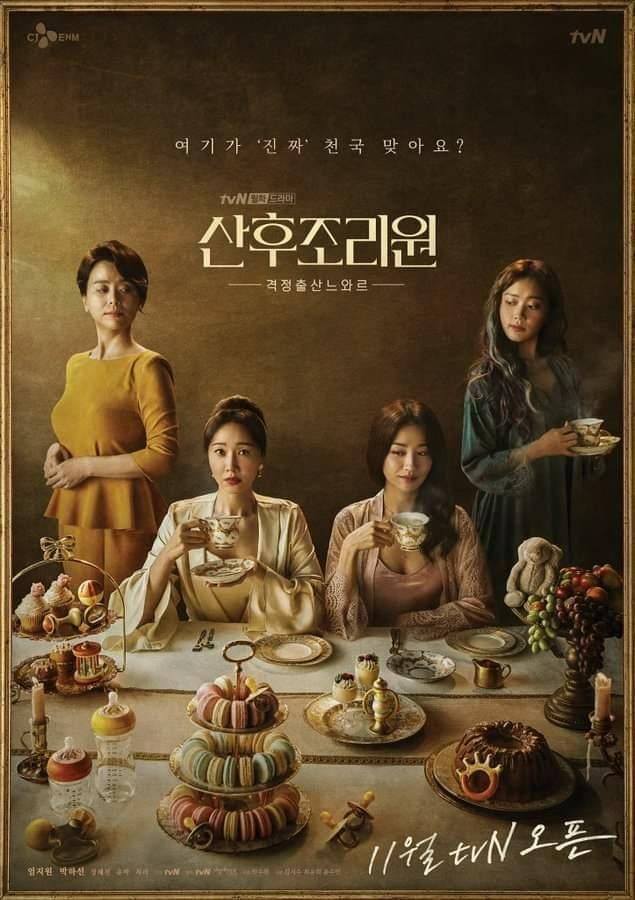 The story follows Oh Hyun Jin’s (Uhm Ji Won) journey to motherhood. Hyun Jin has a thriving professional career being the youngest executive in a huge corporation. However, the time she spent building her impressive resume sidelined her priority to bear a child. Hence, she only gets pregnant later in her life. 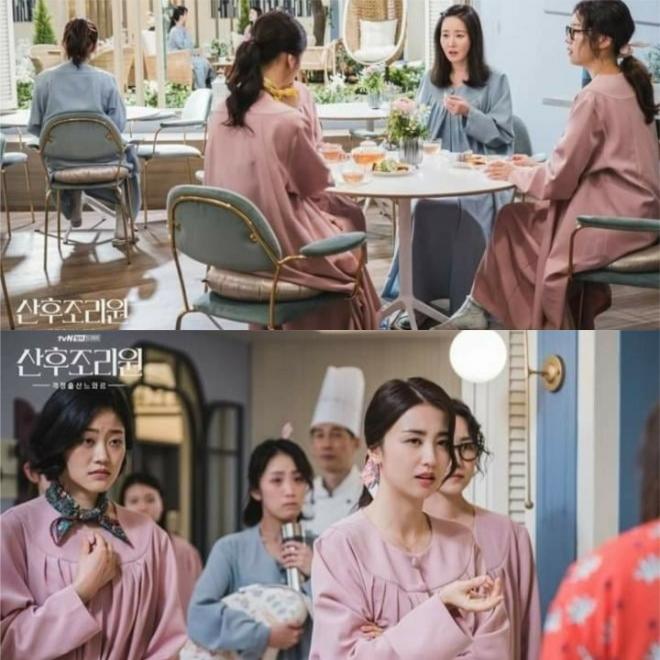 Shortly after delivering her baby, she stays in a birth care center to receive a postpartum care. The high-end facility exclusively caters to high-society women. There she meets fellow mothers who are also nursing their newborns. To her surprise and embarrassment, she learns that she is the oldest among them. 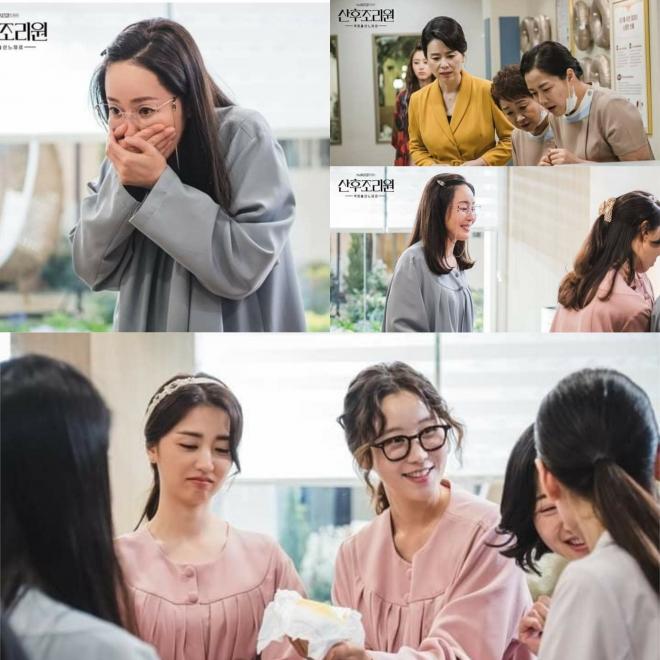 A fellow mother stands out from the rest because of her childcare expertise. Dubbed as the “Queen Bee” of the birth care center, Cho Eun Jung (Park Ha Sun) is the envy of every mother for her seemingly perfect family life. Everyone wants to be her friend and to learn some childcare tips from her. Unbeknownst to all, the visible perfection of her life hides the real flawed family she has. 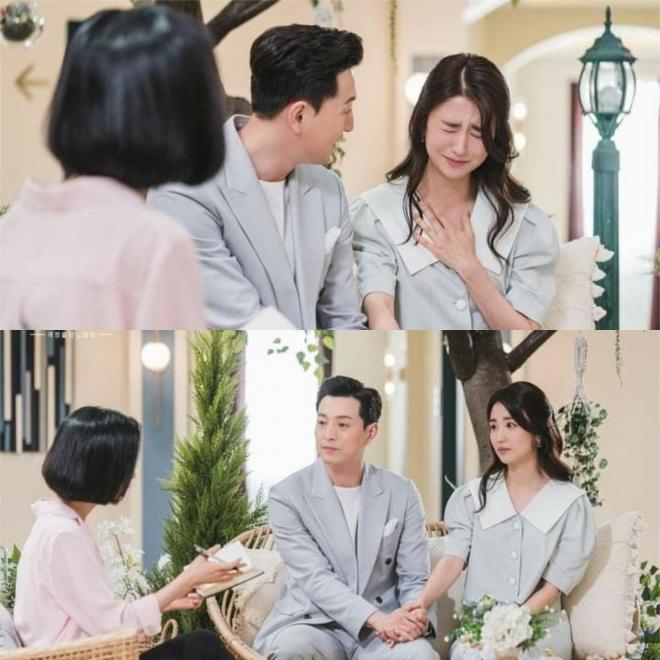 As Hyun Jin slowly sinks into this new chapter of her life, she realizes that motherhood is a whole different world. Her lack of experience becomes the subject of mockery among her fellow mothers. The demand to be able to quickly adapt to the parenting world consumed her so much that it causes her anxieties.

Another person who draws her attention is Lee Roo Da (Choi Ri). She is a strong-willed young mother in her 20’s who is not afraid to break the unwritten rules about motherhood.

Hyun Jin is caught in the middle of confusion and pressure to conform to the traditional childcare ways or to make unorthodox choices in raising her child. Fortunately, she has a supportive husband who is willing to walk hand in hand with her in their parenting journey. 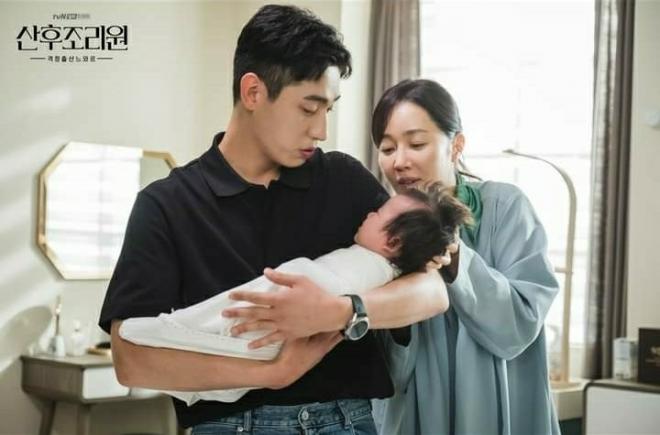 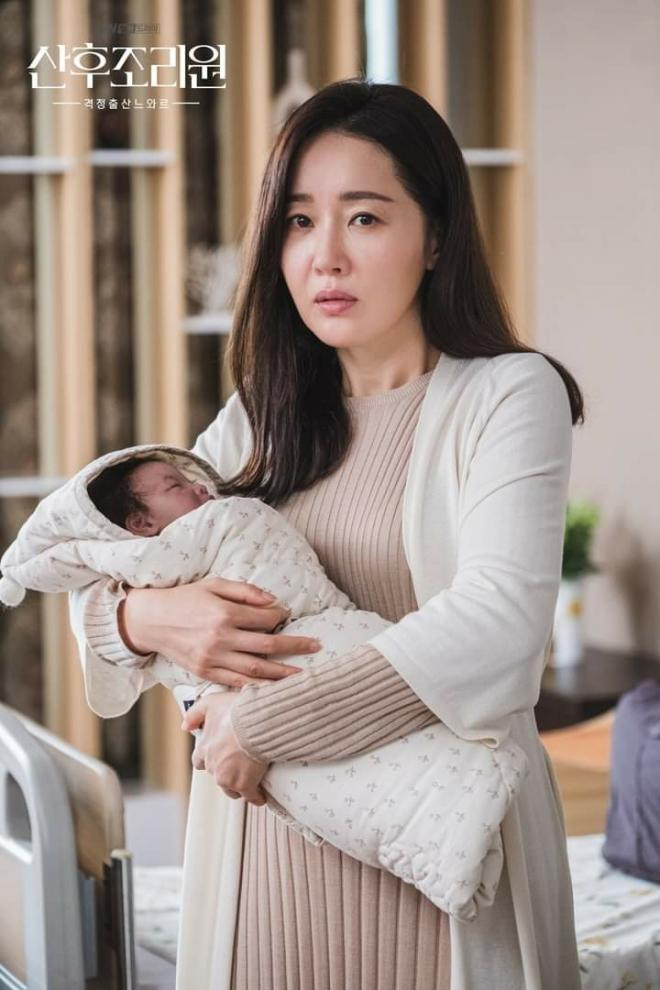 It’s hard to live in a society that dictates the do’s and dont’s of motherhood. It’s even more difficult when it does not leave any room for new mothers to learn at their own pace, through their own ways.

Hyun Jin is a picture of confusion as she seeks for the best formula to be a perfect mother. No matter how much she prepared to be a parent to her baby, all the theories she learned from books and seminars pale in comparison to personal experience.

Her journey threads heavily on mental challenges. As she gets into the post-natal facility, she came face to face with an unexpected irony. Her age and naive ways became the subject of mockery among other mothers. Rather than helping her to become a better mother, the environment made her question her worth as a parent. And so she endured pressures while trying to be on the same level with experienced moms.

In the end, Hyun Jin was able to acknowledge her shortcomings after drowning herself from self-pity and anxieties. Forgiving herself for being too hard on her was a necessary step to raise her child with her warm maternal affection. 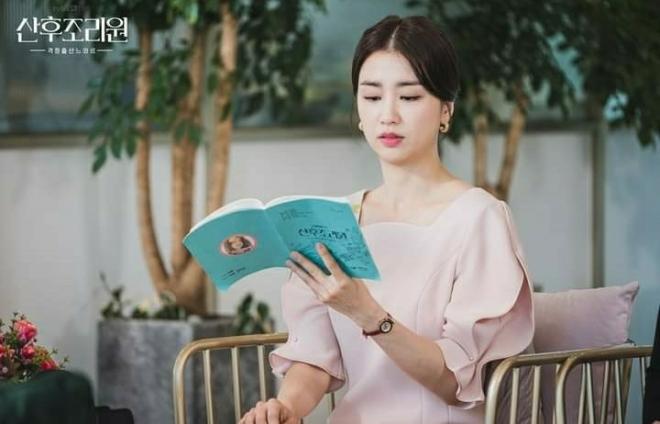 Caring and rearing children seems to be Eun Jung’s calling. Her childcare ways became the yardstick of motherhood perfection. She is the embodiment of a mother who knows what she does and claims superiority over her fellow mothers. For her, putting all the time and energy for a child must be every mother’s foremost priority, nothing else comes close.

While her dedication to her role as a mother is beyond praise, it also exposes a different side of her that needs further delving. Eun Jung loves to brandish herself and her family in social media. She gets satisfaction when people admire her enviable family while she takes credit for its apparent perfection.

Digging deeper into her character, Eun Jung is full of insecurities herself. Having an unsupportive husband and a highly demanding mother-in-law, what she shows off on the outside is a deceiving facade of her life.

Motherhood is her means to redeem her worth as a person. Hence, she pours every bit of herself into raising her kids. The sad part though was when she unconsciously lost herself while trying her best to give everything for her family. The fake life she tried so hard to frame in the public became her reality. 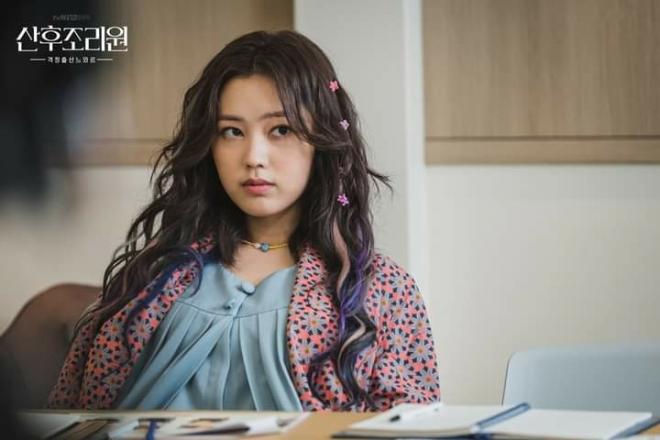 As a mother in her mid-20’s, it implies that she has to go by the established norms concerning motherhood. But Roo Da rebels against these unspoken rules as she shrugs off the stereotypical image of a good mother.

Roo Da’s character borders between being progressive and apathetic. Finding a compromise between her lifestyle and her responsibility as a new mother is the least of her worries. Unintimidated by social pressures, she isn’t sorry to deviate from traditions.

Her choice to feed her baby with formula milk rather than her breastmilk infuriated the conservatives. She is also vocal about her reluctance to get married and openly shares her skepticism on marriage. 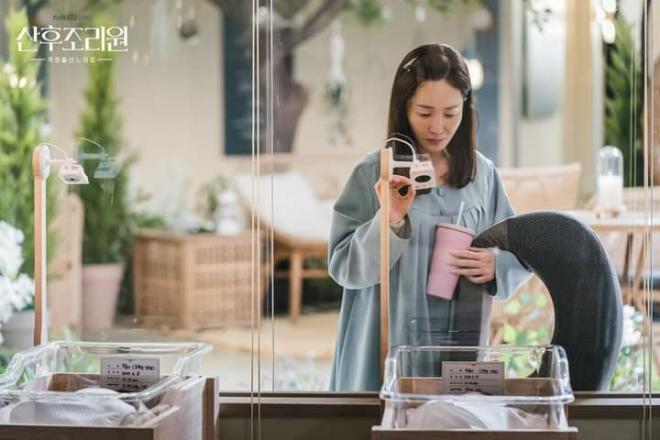 Until recently, mental health issues have been a taboo in most societies. Open discussion about such topics often led to stigma attached to people who suffer from it. This series encapsulates the imperfections of a mother. It captures her raw emotions after delivering her baby – scared, confused and pressured.

Birthcare Center sends out a strong message to every viewer that postpartum depression is a real and serious condition. And just like a physical illness, it likewise needs proper attention to correctly address this issue.

Role Of Society In Forcing Pressure To Mothers 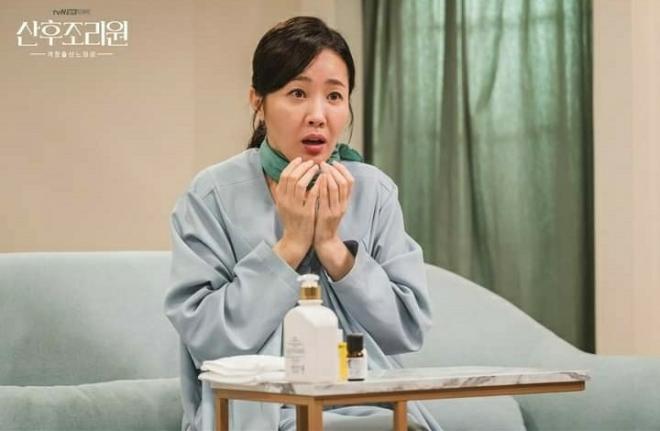 Society plays as a major influencer in shaping one’s mental and emotional well-being. In most cases, one’s self-esteem is being dragged into a bottomless pit for the inability to keep up with societal expectations.

In Birthcare Center, mothers struggle to learn at their own pace because society demands so much from them. Without any room for error, there is an implicit rule that they must be experts in childcare. This is especially evident with Eun Jung’s harsh and perfectionist mother-in-law who expects her to be a perfect mother at all times.

The series, in a satirical manner, echoes a universal message that this kind of culture contributes to the mental anxieties of every mothers. Birthcare Center advocates an encouraging and understanding environment where every mother would not feel ashamed of asking for help.

Experience As The Best Teacher 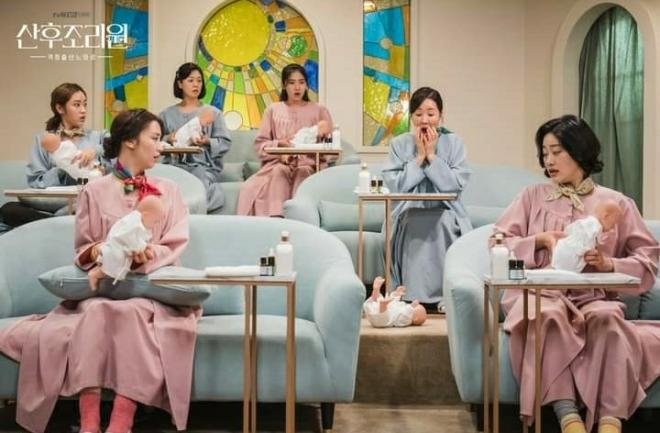 Nothing would substitute for experience as the best teacher in life. And it resonates well in this series. Hyun Jin, no matter how much she had prepared for motherhood, still grappled from the overwhelming things she needed to learn in order to become a better mom to her child. And only after some trials-and-errors did she understand well that first-hand experiences are priceless.

It not only deepened her knowledge about childcare, but more importantly, it allowed her to grow as a person. She learned to be more forgiving of her shortcomings and trusted her own skills while providing an uncompromised affection for her child. 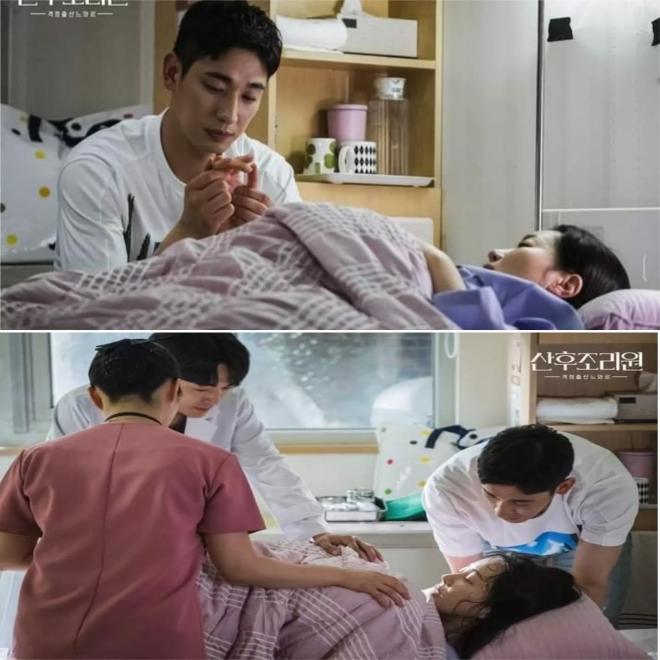 A strong emotional support system is the antidote to depression and anxiety. The invaluable company from family and friends provide a significant reassurance and security in every emotional struggles.

With Hyun Jin’s frail self-esteem, her husband’s unconditional love for her became her fortress during those difficult times. She couldn’t ask for a better person who’s ready to bear the brunt of her insecurities even if, sometimes, it all seems incomprehensible to her husband.

Infusing humor in discussing a serious subject matter, Birthcare Center is a fun drama to watch. But more than the entertainment it provides, its informative narrative delivers a resounding message about the struggles of every mother. The series successfully accounts a woman’s journey to motherhood- from conceiving to raising their kids.

Every episode brings in the element of comedy as the series incorporates parodied scenes related to some parenting and marriage myths. Hence, it makes the drama even more engaging even to audience who aren’t mothers. Such approach is important that even if the theme strongly talks about a specific group, those who fall outside of such group can also appreciate the story and understand its underlying message.

Important Points From The Series

One of the drama’s main objectives is for people to understand the gravity of postpartum depression and to get the serious attention it deserves. For that matter, Birthcare Center is able to bring some enlightenment to the viewers in depicting the lonely battle of each mother against anxiety and pressure. And only through an in-depth comprehension of the issue can society create a more friendly and encouraging environment for mothers.

Birthcare Center also touches the topic about neglecting self-care and how some mothers tend to lose their individuality in the process. Sometimes, women are so consumed of their roles as mothers and wives that they tend to push aside their own personal needs.

Moreover, Birthcare Center points out how the arrival of a child in a family changes the dynamics of a married couple’s relationship. As the the drama puts it, “The birth of a child is a turning point of marriage.”

Although the series exposed the mothers’ vulnerabilities, it is still a beautiful ode to their unconditional love for their family. The drama celebrates their selflessness despite their humanly limitations.

Birthcare Center is recommended to anyone who’s looking for a humorous story that mirrors some serious societal issues.