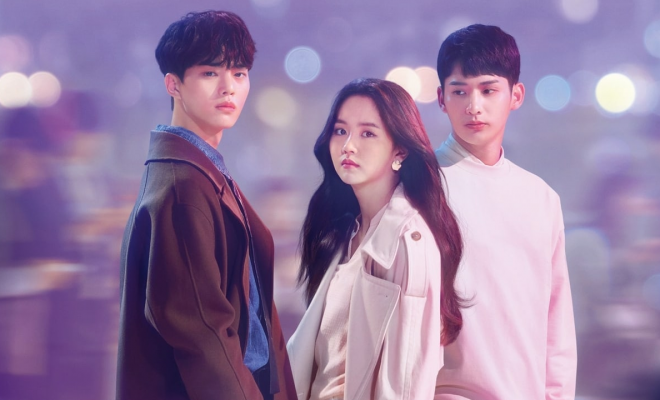 The drama presents itself as a teenage romance, but as viewers reflect on its main theme, it takes on more of a Black Mirror kind of energy. The influence that one app can have on the lives of its users can be daunting. 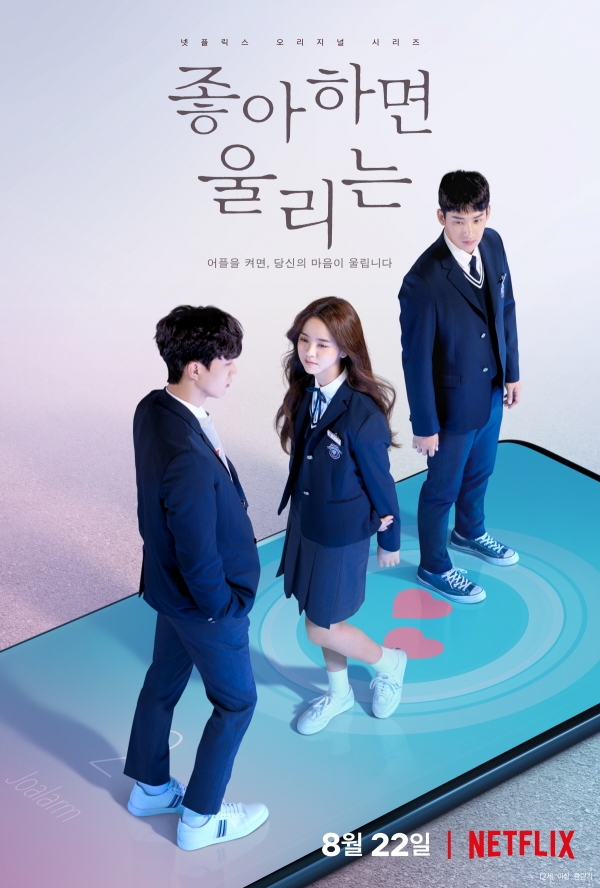 Nation’s Little Sister Kim So Hyun makes her Netflix debut as the beautiful but troubled Kim Jojo. A quiet teenager who refuses to waste any time doing the usual teenage things like going to internet cafes. Instead, she devotes all her time in working part-time jobs to support her ailing grandmother. Jojo unknowingly gets caught in a love triangle with childhood friends  Lee Hye Yeong (Jung Ga Ram) and Hwang Sun Oh (Song Kang).

Despite the rising popularity of the Love Alarm app, Kim Jojo refuses to download the app. Instead, she keeps busy with her part-time jobs. Jojo struggles financially but pretends that everything is ok. She goes as far as lying to her teachers and friends about her after school academy and school lunches. Jojo has a boyfriend, Il Sik, but the relationship is more of convenience for Jojo.

She eventually meets Hwang Sun Oh, former magazine model. Sun Oh’s Love Alarm goes crazy as girls fawn over the handsome new student. Sun Oh is the son of Jeong Mimi, a popular actress who is actually very distant from her son. Instead, Sun Oh has been under the care of Hye Yeong’s mother. Sun Oh and Hye Yeong grew up together, with the latter often looking after his best friend Sun Oh.

Sun Oh falls in love with Jojo, but he suspects that Hye Yeong is also in love with the girl. To prove it, Sun Oh kisses Jojo, but surprises himself when he falls in love with her. Despite the fact that Jojo is bullied in school, Sun Oh adores the quiet girl. The school goes into a frenzy when the relationship is revealed. 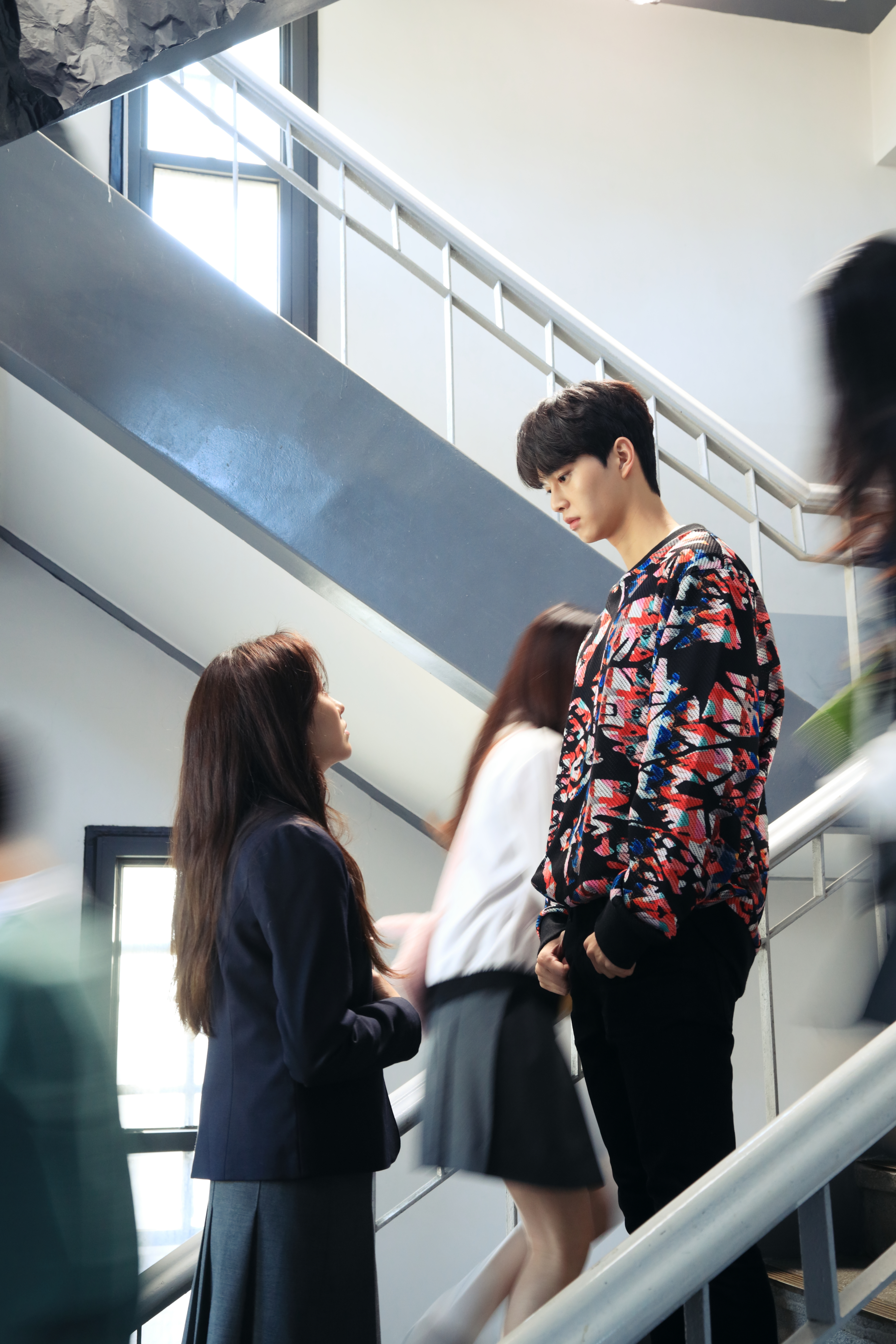 While on a school trip in Jeju Island, Jojo and Sun Oh get into a motorcycle accident. Sun Oh’s parents immediately whisk him back to the city and keep him away from Jojo. However, Jojo manages to convince herself that she will eventually hurt Sun Oh if she continues the relationship, so she activates a shield on her Love Alarm app, keeping her true emotions from ringing on her loved one’s app.

Jojo publicly breaks up with Sun Oh, but he refuses to accept that she no longer loves him. He is shocked when Jojo’s love doesn’t register on his Love Alarm app, but he continues to beg Jojo to take him back. Although it pains Jojo, she rebuffs his attempts every time. Eventually, Sun Oh leaves for America.

Meanwhile, the Love Alarm app has exploded in popularity. Love Alarm has changed relationships as it relies more heavily on the accuracy of the app. Jojo’s shield still works on her phone, carefully concealing her true feelings. Hye Yeong attempts to persuade Jojo with his true feelings for her. He reveals that he deleted the app when they were in high school to avoid complications with his best friend Sun Oh. However, Hye Yeong is determined to ring the alarm on Jojo’s Love Alarm app.

Sun Oh finds out that Hye Yeong is set on winning Jojo’s heart. For his part, nothing has changed for him since he still loves Jojo. In fact, every time he gets within 10 meters of Jojo, he still manages to ring Jojo’s Love Alarm.

On the day of the launch of Love Alarm 2.0, Jojo turns up at the launch to get her shield removed. Hye Yeong, Sun Oh and Jojo finally get within 10 meters of each other. 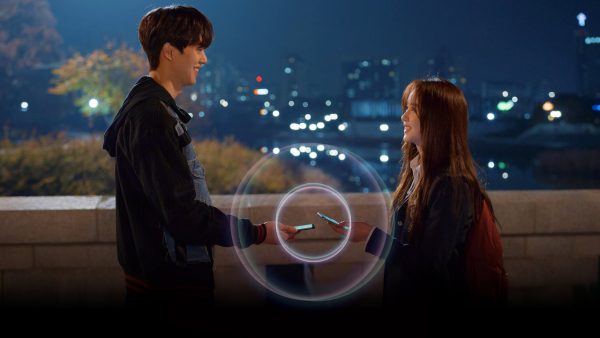 For me, it’s so refreshing to watch a Korean teenage drama that’s light but there’s still a little bit of drama in it. As I felt during My First First Life, 8 episodes for 1 season is simply not enough! I actually considered not watching this first, and just wait for Season 2. But my EQ is actually pretty low, so of course I binge-watched the entire Season 1 days after its premiere.

READ: K-Drama Review: How “My First First Love” Shows That It’s Okay Not To Know Everything Right Away

Kudos to the entire cast for being able to pull off such complex characters that had very complicated emotions. The three leads in particular did a stellar job in figuring between a love triangle.

May I say that Song Kang is ADORABLE. I was enthralled by this boy and how well he acted throughout the entire drama. At first, I was put off by his cool as a cucumber attitude. I even thought to myself that he was just another cliche actor relying on his good looks. But he surprised me with his depth! He was very reflective in his scenes with Kim So Hyun’s character, and their chemistry was outstanding. I was actually ready to end on Episode 3 when Jojo and Sun Oh became a couple. For me, that would have been the perfect ending.

I’ve watched Kim So Hyun’s previous dramas, so I could rely on this girl to deliver as Kim Jojo. As always, I’m impressed by how talented this young girl is. For her young age, she pulled off such a heavy character laden with emotional baggage from her past. My heart literally went out to Kim Jojo, who was so unlucky in life. When she broke up with Sun Oh, her pain was palpable that I wondered what kind of heartbreak Kim So Hyun went through in real life for her to execute such emotions onscreen. 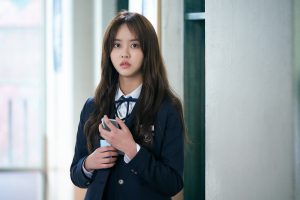 Another thing I loved about Kim Jojo is her outfits. Her transition from a young high school girl to a young woman on the verge of becoming an adult was done subtly but it was very beautiful. The changes were minimal as she traded her school uniform for neutral and earthy colors. Small touches were added like jewelry and a very simple and basic sense of style. But Kim So Hyun was gorgeous in the latter part of the drama.

What can be this drama’s biggest drawback other than the fact that there is only 8 episodes for its first season? Understandably, I know that season 2 is in the offing, but I can’t wait! I need to know who Kim Jojo chooses in the end.

Other than that, I’d have to say that I’m kind of getting past characters that have had traumatic childhoods already. Although Kim Jojo did well in her character portrayal, it was too heavy for the female lead to have that much baggage. It came to a point when I’d start to feel frustrated and just want Jojo to get a break. 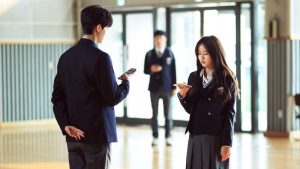 This drama is an eyeopener because it focuses on an app that takes over the lives of its users. Taking its cue from real life, viewers are faced with a grim reality of the dangers that social media and app usage can cause. It gives us a grim picture of the reality of social media. In the drama, we see the need to be affirmed by the number of rings, or likes, or comments we receive tend to define us as people.

Love Alarm can be streamed on Netflix.