The first teaser for the third movie collaboration of Jung Yu Mi and Gong Yoo has been released.

Based on the best-selling book of the same name; Kim Ji Young, Born 1982 takes its film adaptation with a powerhouse cast. The book, written by Cho Nam Joo, has sold over a million copies and centers on the story of Kim Ji Young. 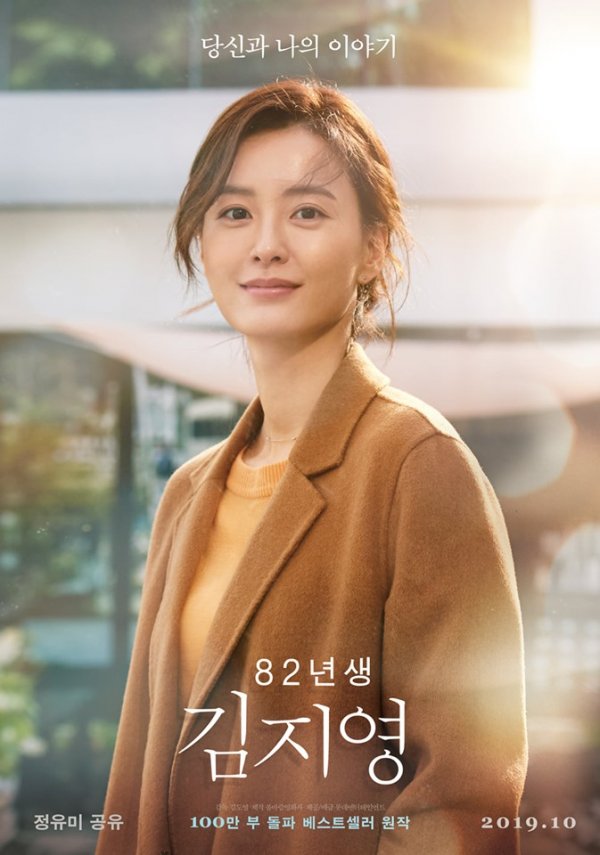 Portraying the titular role, Jung Yu Mi is set to draw realistic emotions that comes with the pains experienced by a woman. Deciding to become a stay-home mother after marriage and child birth, she succumbs to depression.

Set for October release, the film poster captured the actress staring focused at the camera with a delicate expression. Expressing a faint smile, it introduces Kim Ji Yong as someone’s daughter, wife, colleague and mother.

Playing the role of Jung’s character’s husband is Gong Yoo. This will reunite Gong and Jung after films The Crucible (2011) and Train to Busan (2016). It further heightens the interest for the comforting message the film wants to impart.

Additionally, Jung is also gearing up for her Netflix project with Nam Joo Hyuk for drama School Nurse Ahn Eun Young. In the drama, she is a teacher who has the power to exorcise evil wandering spirits. She will be helped by the teacher character that will be portrayed by Nam.

Meanwhile, Gong Yoo also preps up for another film where he will suit up for the role of a former intelligence agent who meets the first ever human clone, to be portrayed by Park Bo Gum.

We need your support! If you have enjoyed our work, consider to support us with a one-time or recurring donation from as low as $5 to keep our site going! Donate securely below via Stripe, Paypal, Apple Pay or Google Wallet.
FacebookTwitter
SubscribeGoogleWhatsappPinterestDiggRedditStumbleuponVkWeiboPocketTumblrMailMeneameOdnoklassniki
Related ItemsGong YooJung Yu MiKim Ji Young Born 1982
← Previous Story Han Hyo Joo Graces Harper’s Bazaar October Issue, Talks About Landing A Role In US TV Series
Next Story → K-Drama Premiere: “When The Camellia Blooms” Delicately Hints At A Beautifully Entwined Blossoming Of Love And Mystery