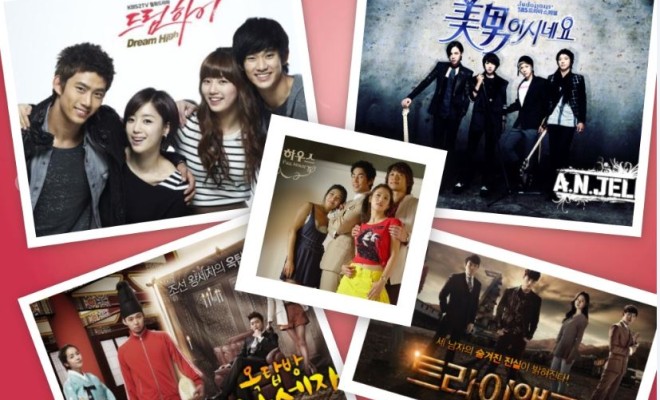 Many of us K-pop fans are also ardent viewers of Korean dramas, and recently we can see a growing trend of idols taking on acting roles. So we thought we would ask hellokpop writers, editors and social media officers to vote for their favourite idol dramas!

It turns out, that just like with music, in case of television series, too, we have diverse tastes. Here’s what hellokpop staff consider the best idol dramas, in reverse order:

The 3rd place is shared by multiple dramas, that got equal votes.

The story of three brothers being separated when they were young and finding each other again is an interesting one. Jaejoong plays the thug with a heart convincingly. Sure, the romance is a little…off – and that whole triangle of love and of the brothers themselves is a bit confusing at times – but it works.

The way they act while eating the food is just so… gaahh!! And Yoon Doojoon (Beast) is so hot.

A Love to Kill: Rain

This classic K-Drama is a real tear-jerker (my favorite type), and Rain’s stellar acting brought his character, Kang Bok-gu, to life for me. Lee Kyung Hee, the author of A Love to Kill is also one of my favorite screenwriters. I have enjoyed many of her dramas, such as, I’m Sorry, I Love You, Sangdoo, Let’s Go to School (another great Rain drama), Nice Guy, and Will it Snow for Christmas.

It’ll be kind of hard not to like FT Island’s Honggi for his super cuteness in the show, CN Blue’s Yonghwa for constantly tugging my heartstrings and finally After School’s UEE, who did so well still looking pretty when she’s busy throwing fits. 🙂

I would say that this is one of [my favourites] because it showcases Sooyoung’s development as an actress. The way she acts in this drama is seamless because the character is so much like her, I don’t even think that acting was needed because it is so natural.

I watched it from our local TV network – dubbed and cut, but this exposed me to Rain’s effectiveness as an actor and as an idol. He portrayed a role with a lot of moods and in the final episode, we were given a glimpse of Rain’s powerful stage performance as a bonus clip!

Rooftop Prince landed second place with two votes from our writers. Here’s what they had to say about it:

I like to watch dramas that make me go through a roller coaster of emotions and Rooftop Prince did just that. The drama made me cry tears of joy and tears of sadness. Also, the chemistry between the cast members really made the drama enjoyable.

Rooftop Prince was probably one of the funniest dramas I have seen. This was the second drama I watched with Yoochun and he really impressed me here. The story is very interesting, with the switches between past and present and the question of reincarnation raised is also catchy. This drama really made me look at Yoochun in a different light.

Our staff picked Dream High as the best idol drama, with three votes:

Apart from getting to see our idols sing, we got to see them act along with other idols in the K-pop industry. It was nice to see them interact within a drama sense, fulfilling our fictional curiosity of idols hanging and singing together. Plus IU and Wooyoung made an amazing couple.

It is different from the normal romance and comedy drama. It’s light-hearted but serious at the same time. Other dramas, like Dream High 2 and Monstar have tried to remake it but the end result is not as powerful as Dream High.

This drama made me fall in love with the Korean industry and culture, since it was the first Korean drama I had watched and [it] presented exposure to the entertainment industry. It was enjoyable to watch it from the high school plotlines, musical aspect and entertaining characters. I haven’t watched many dramas after that but this one remains to be a memorable one. It also helped familiarize myself with the K-pop idols and groups and therefore furthered my interest in K-pop.

Have you seen any of these dramas? Which one do you like most? Or did we miss your favourite? Let us know in the comments!