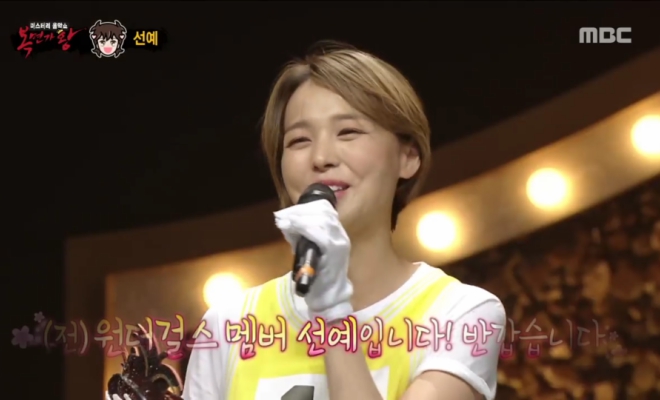 After leading a quiet life as a wife and mother to her two children, South Korean singer Sunye is gearing up to return to the K-Pop scene.

The former leader of Wonder Girls has signed a contract with Polaris Entertainment – five years since leaving the entertainment world and going on a hiatus. To signal her upcoming return, the singer has made an appearance via MBC’s popular singing competition program, King of Mask Singer.

Wearing a Honey mask – a character from the animation series Run, Honey, Sunye impressed the panel with her renditions. She first appeared on the August 5 episode of the show as “Harney”, where she competed against “Young Shim” in the first round. The two singers performed a duet of Younha’s “Password 486”, with Sunye taking the win against Weki Meki’s Kim Doyeon.

In the next round aired on August 12, she performed Lee Juck’s “It’s Fortunate”, winning against Kim Tae Hyung of Click B. For the third round, she sang Park Hyo Shin’s “Breath”, and successfully continued her winning streak, beating folk singer Park Aeri.

However, Sunye failed to win against the current king, leading to her revealing her identity. The panel and audience expressed surprise to see the singer on stage again.

In her Instagram post, the former leader and main vocalist of Wonder Girls considered it a pleasant experience to stand on stage after a long time. She also thanked the panel and staff for helping her in her TV appearance.

Sunye further expressed her gratitude to VIXX’s Ravi, who praised her stage and revealed to be a fan of hers. She added that she was touched by the gesture, and it inspired her to continue singing.

Ravi also shared a photo taken with Sunye on his Instagram stories.

Hellokpop, as an independent Korean entertainment news website (without influence from any agency or corporation), we need your support! If you have enjoyed our work, consider to support us with a one-time or recurring donation from as low as US$5 to keep our site going! Donate securely below via Stripe, Paypal, Apple Pay or Google Wallet.
FacebookTwitter
SubscribeGoogleWhatsappPinterestDiggRedditStumbleuponVkWeiboPocketTumblrMailMeneameOdnoklassniki
Related ItemsKing Of Mask SingerSunyeWonder Girls
← Previous Story K-Drama Premiere: “Voice 2” Reeks Another Intense Hero-Villain Showdown In Gritty Plating
Next Story → Sung Hoon, Eun Ji Won, Park Joon Hyung & Yoo Seon Ho To Take Over “Carefree Travelers” Season 2