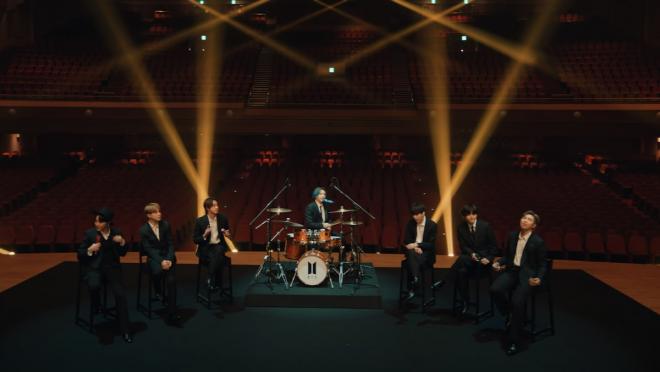 Another mesmerizing “Dynamite” performance from BTS!

Taking the virtual stage yet again, the worldwide K-pop boy group BTS participated at the Music On A Mission online benefit concert.

On March 12, the septet delivered a stunning performance of their record-breaking track “Dynamite” at the week-long charity concert of Grammy. Spearheaded by MusiCares — the philanthropic arm of the Recording Academy, which organizes the annual Grammy Awards — the other performers for Music On A Mission included John Legend,  Jhené Aiko, HAIM, and  H.E.R.

That was a dynamite performance by @bts_bighit ⚡️🎶⚡️ If you missed it, you can rewatch #MusicOnAMission virtual concert until March 19th 2021.https://t.co/mKx8FadBVu pic.twitter.com/e83ZtKPY4M

Donning black suits, the boys looked sleek and stunning as they perform their Grammy-nominated song at the Peace Hall at Kyung Hee University in Seoul. Remarkably, Jungkook surprised fans as he played the drums on-stage. Shortly after their performance, the phrase “Drummer Jungkook” topped the worldwide trending list on Twitter.

Meanwhile, in other recent news, BTS has been chosen as Billboard’s Greatest Pop Star in 2020. They are likewise crowned by the International Music Record Industry Association (IFPI) as the Global Recording Artist of 2020. Moreover, BTS will perform at this year’s Grammy Awards, which will air live on March 14 at 8 p.m. ET.

Watch BTS’ “Dynamite” performance at the Music On A Mission below: