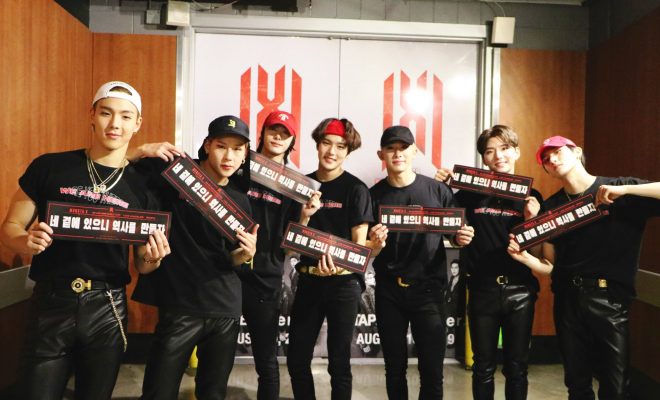 Truth be told, “dominated” is an understatement as to how MONSTA X owned the stage of Staples Center.

MONSTA X and Monbebes made a lot of memories to cherish for a long time as the seven boys finally stood on the stage of Staples Center in Los Angeles on August 10. 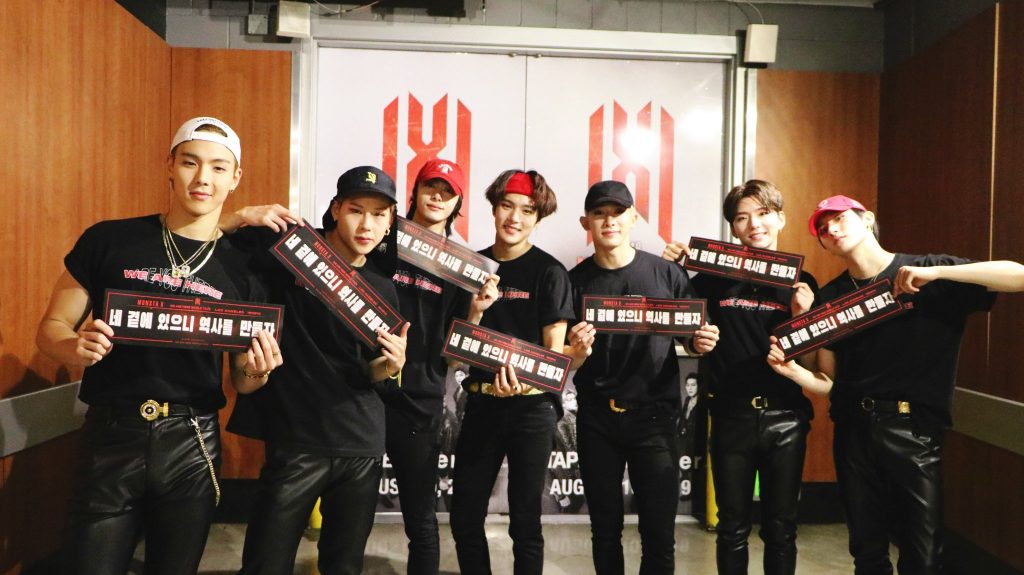 Closing the US leg of their massive WE ARE HERE World Tour, the group fulfilled one of their dream stages as they lit up Staples Center together with Monbebes who were all beaming at them proudly while waving their Mondoongies up in the air.

MONSTA X immediately brought the venue down and set everyone’s hearts racing wildly with intense performances of their all-time hits “Shoot Out”, “Hero”, and “Trespass”.

Starting the show with this trio of powerful tracks, the septet immediately amazed everyone with how they were able to keep themselves stable despite performing with intense choreography.

Although this is not new to Monbebes who are well aware of the group’s overflowing talent, it still presented itself as such an out-of-this-world experience when seen live altogether. 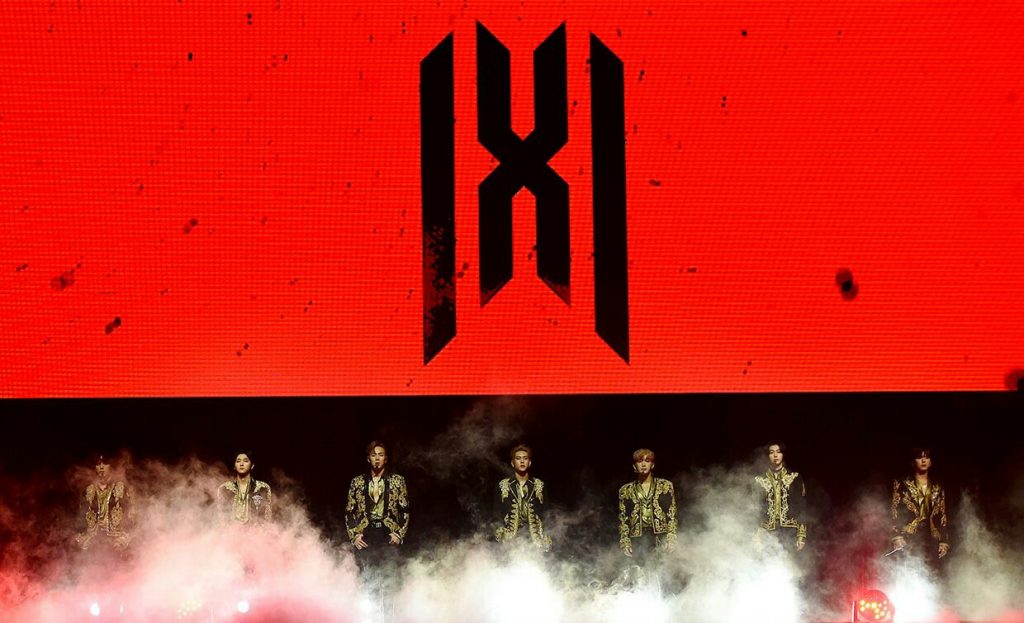 Greeting everyone in fluent English and his beautiful deep voice, MONSTA X’s I.M made everyone roar with excitement right after their opening stage.

Minhyuk also happily exclaimed, “I’m so happy to see you all again! How have you been?”

“LA is the last city on our US tour. More Monbebes are also on the way through V Live,” Wonho noted as well, giving a shoutout to their fans watching at home through livestream offered by Naver V Live+ exclusively for the concert.

As announced by their agency prior to the show, the group’s main vocalist Kihyun had to perform the first three songs along with the concert’s remaining setlist while sitting down due to his fractured rib.

His injury was again addressed by the ever-loving leader Shownu who said, “We originally stated that he really needed to take a break at the hospital, but “Super Passionate Man” Kihyun wants to stand on stage to keep his promise with the fans today, so we all proceeded together.”

READ: Monbebes Shower MONSTA X’s Kihyun Back With Love And Support For WE ARE HERE Concert In Los Angeles Amidst Injury

“I came here because it was our promise to you. Even if I can’t dance, I’ll sing hard. I’ll sing hard enough to satisfy everyone. Don’t worry,” Kihyun himself promised everyone. Although the crowd persisted to worry as he shouldn’t even be singing with a cracked rib, the vocalist braved through with an unfaltering smile on his face. 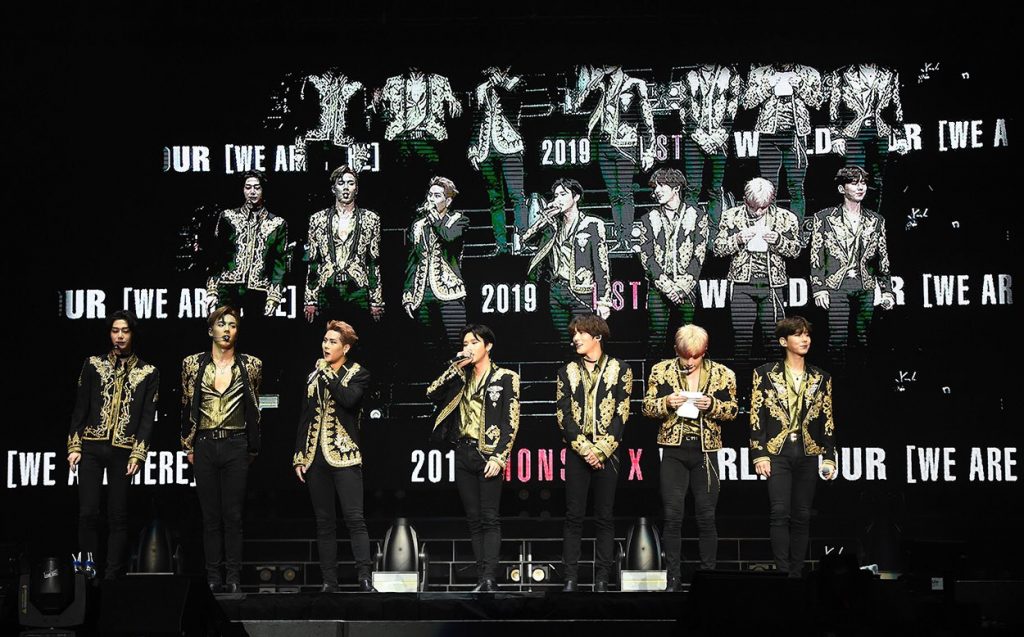 The septet then continued with the hype-filled bops “Party Time”, “Play It Cool”, “Miss You”, “MOHAE” and “Jealousy”.

Showing their excitement towards the performances, Monbebes’ voices singing along with the group and doing their fan chants filled the humongous venue which can house a capacity of over people.

Besides their ever-powerful performances, MONSTA X also astounded everyone with the VCRs they had prepared for the show.

One of them painted a scene reminiscient of the Los Angeles night view, while another showcased the seven members doing their own individual broadcasts.

Giving fans a variety of content like mukbang (eating show), ASMR, exercise, makeup, styling, and more, it made use of each member’s different personalities which all fans love and cherish. 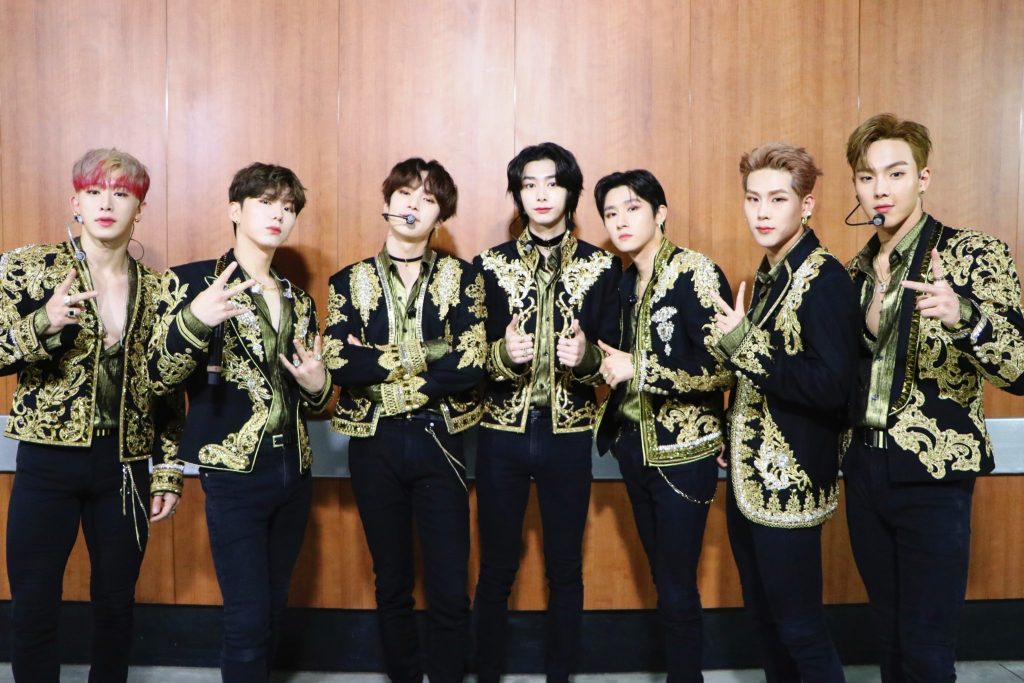 MONSTA X then returned to the stage in units – starting with the power vocal trio Minhyuk, Kihyun, and Hyungwon.

They showed the Los Angeles crowd their live cover of Bazzi’s “Myself” which captured their chemistry together and also effectively proved their vocal prowess.

Afterward, Joohoney and I.M made the rap scene bow down to them with an electrifying performance of “Sambakja”.

Finally, Shownu and Wonho dazed everyone with a jaw-dropping duo stage of “Mirror”, captivating everyone with their manly charms and sending shivers especially with the way they owned the stage by dancing. 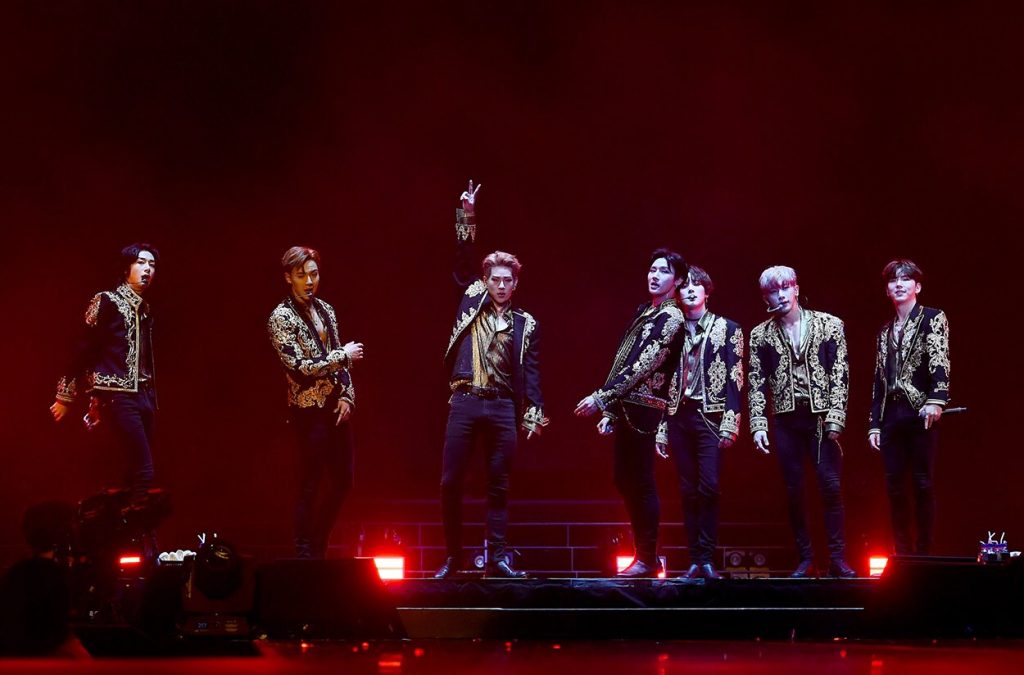 From lustrous to cute to intense

MONSTA X then set their powerful stages aside for a while and changed into schoolboy uniform to show their other side – the cute and cuddly septet which can make just about anyone’s hearts soft.

Making the crowd which filled the huge venue fall in love with them even more, they endowed sweet serenades with the tracks “Honestly”, “I Do Love U”, “White Sugar”, and “No Reason”.

They also asked Monbebes “Who Do U Love?” as they staged their English single which had been taking the American television scene by storm after being performed by them in very popular shows like Good Morning America and Jimmy Kimmel Live.

Bringing their intense stage charisma back, the group then donned their leather jackets and leather pants – along with Wonho’s abs – and made Monbebes brace themselves again with another wave of intense performances.

The septet shot everyone in the hearts with a showcase of “DRAMARAMA” and followed through with performances of “Oh My!”, “Special”, and “Fallin” which earned incredible responses from the crowd.

Pretending to close the show, MONSTA X made sure that Monbebes had fully been pulled into their swamp already at this point – and with no way of escaping anymore. 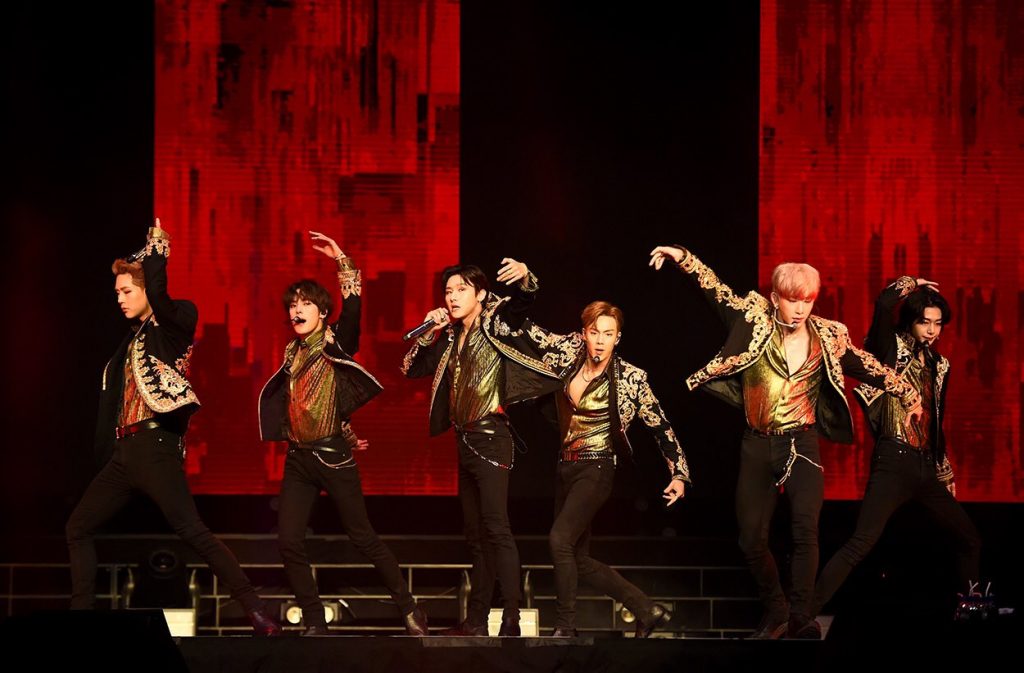 DJ H.ONE made his return with fresh beats made especially for the Los Angeles crowd as Hyungwon channeled his alter ego once again for a hype-filled set.

Continuing the party vibe was the septet’s exciting performance of “Rodeo”. The upbeat mood it set slowly dwindled afterward as all seven boys gave the crowd their last words before bowing with their last song.

Along with Kihyun’s touching message, Joohoney also moved the crowd as he recounted the first time they stood on the stage of Staples Center for KCON.

“I remember people watching it because it was ‘very fun’,” the rapper recalled the memorable event which has become forever etched in their hearts as they stood on the Staples Center stage again.

“No matter who you are, where you come from, or who you love, I love each and every single one of you the same. I will always be by your side. So everyone, be happy, stay happy,” he also said.

Wonho also gave his own dose of emotional message by talking about how the venue has been a huge dream for the group as well.

“More than anything, MONSTA X is not just a KPOP concert. It’s actually the representation of the love between Monbebe and MONSTA X,” the singer noted.

The boys were definitely fighting back tears as they headed to their last song “By My Side”. Leaving “I love you all day, I love you always” as their final message to everyone through the song, MONSTA X beautifully reminded all Monbebes that they will stay in their hearts forever. 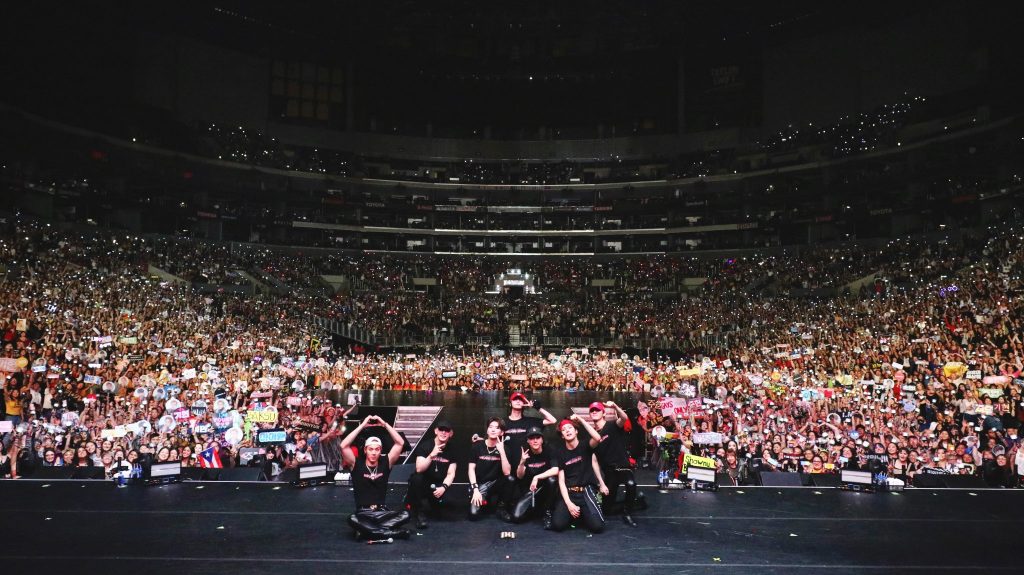