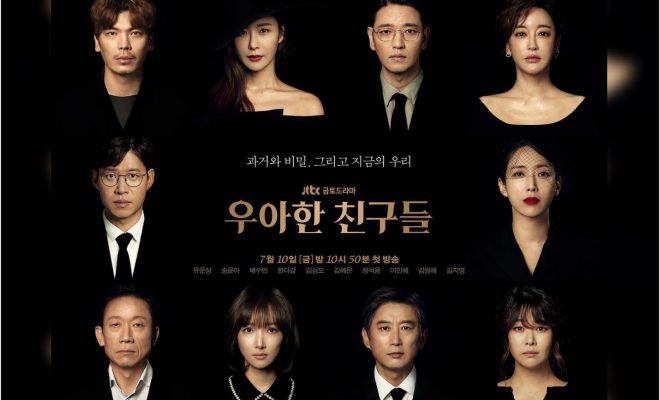 Graceful Friends looks ahead to entice audiences with its explosive tale that exposes the untold secrets behind a perfect family life.

Following their continued success with makjang dramas, jTBC is looking for another strike as they bring forth their latest drama, Graceful Friends. The series trails the events in the lives of a group of friends in their forties.  Everything was going on smoothly until one day, a mysterious murder occurs. 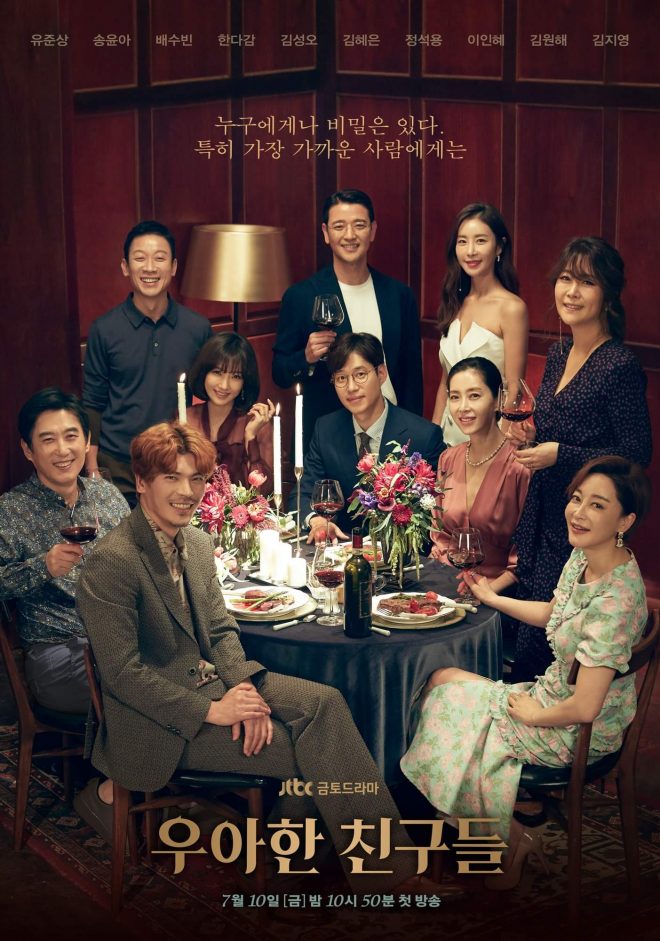 The five friends and a sudden storm

The premiere begins with a murder scene wherein Ahn Goong Chul (Yoo Jun Sang) is the suspect. An interrogation occurs that also involves his friends Jung Jae Hoon (Bae Soo Bin), Jo Hyung Woo (Kim Sung Oh) and Park Chun Bok (Jung Suk Yong), who talk about how Ahn Goong Chul is as a person and if he had any motive for murder.

While on the way to the gathering, Goong Chul notices that his friend Chun Man Sik (Kim Won Hae) is having tough time at work. During their hangout, the men goof around together as they joke about their old age. 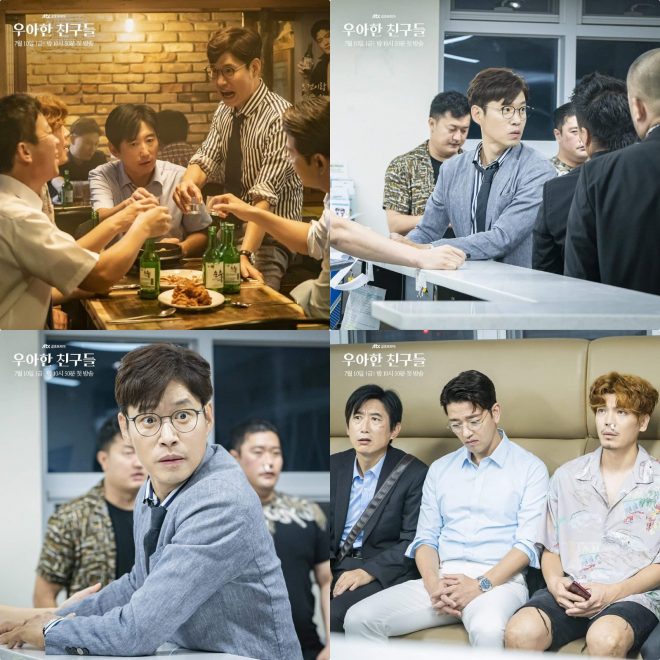 After the friends disperse ways, Goong Chul and Man Sik had a deep talk where the latter was about to make a confession to his friend. However, he changes his mind and does not tell anything.

The next day, it was Nam Jung Hae’s birthday and Goong Chul being the doting husband took her out for dinner. What he didn’t know back then was that on the very same day, Man Sik died of heart attack.

Return of a woman from the past

However, there’s a third angle in their romance in the name of Baek Hae Sook (Choi Soo Jung), the college beauty who was loved by everyone. However, she suddenly disappears and there were also rumours about her killing a professor.

Surprising everybody, Baek Hae Sook (Han Da Gam) makes her return again as she attends Man Sik’s funeral. What is even more surprising is that no one was in touch with Hae Sook during all those years and she was not invited by anyone either.

Nevertheless, Hae Sook has an encounter with Jung Hae where the two ladies verbally battle each other. But Hae Sook completely stuns the other by telling that she is aware about her hidden secret. On the other hand, after returning home drunk on the day of his friend’s funeral Goong Chul mutters Hae Sook’s name in a drunken state. 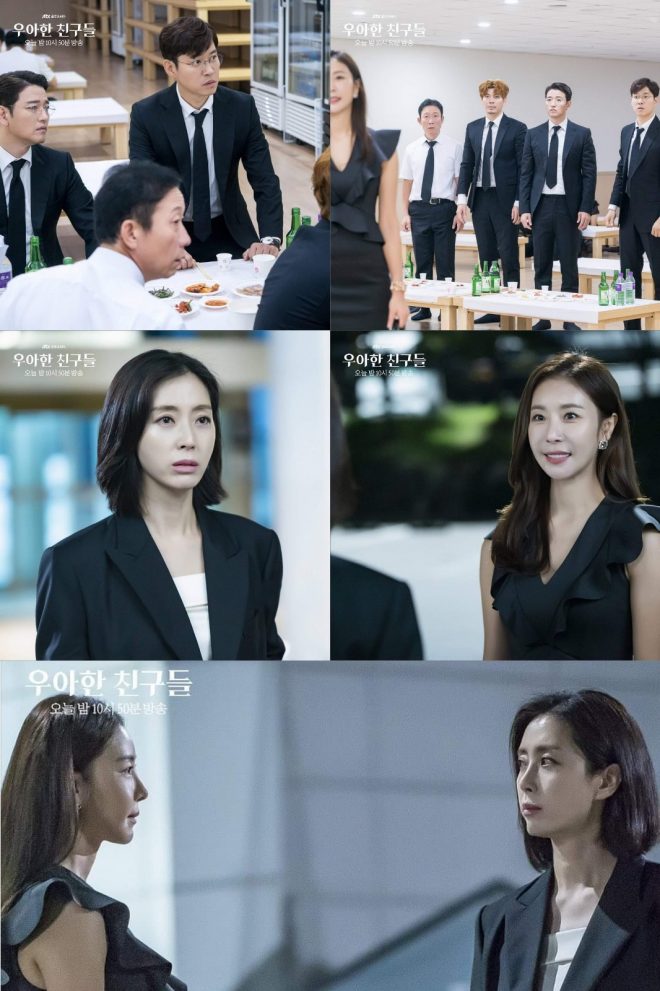 A tangled web of conspiracies and secrets

As it turns out, Man Sik had too many secrets of his own. On the day of his funeral, an unknown lady appears and bawls her eyes out. When Man Sik’s wife, Ji Myung Sook (Kim Ji Young) inquires the lady on how she knows her husband, the woman tells her that they were merely acquaintances.

Later, it gets revealed that in a dire need of money, Man Sik had cancelled his insurances and withdrawn all the money despite the fact that in doing so, he is incurring a huge loss. When Myung Sook finds out about this, she tries to find out what her husband had been up to.

Moving on to Nam Jung Hae’s life, she had been taking golf lessons because she will be meeting an influential person who might be beneficial for her career. Through these lessons, she meets Joo Kang San (Lee Tae Hwan) who is her golf coach. Meanwhile, Jung Jae Hoon has been keeping tabs on her whereabouts.

In a turn of events, Ahn Goong Chul gets a call from Ji Myung Sook who asks him to meet. She tells him that her husband had been having an affair with his wife and also hands him a transcript of messages that were exchanged between the two.

As Ahn Goong Chul sets out to open the envelope received from Myung Sook, he receives a call from his wife’s number, but there is no one speaking from the other end. He tries calling her repeatedly but to no avail. Then, the scene shifts to Joo Kang San holding Nam Jung Hae’s phone while she is lying unconscious on his bed.

Adult affairs, treachery and mysterious secrets seems to be the ongoing trend these days and Graceful Friends is here to serve all these. I had huge expectations from this drama because even much before its airing, Graceful Friends was already creating a buzz because of its theme, which is similar to two of the most successful jTBC dramas.

So far into the premiere episode, there were some parts that I liked while the others not so much. The standout point of this drama is the mystery. Expect lots of twists and turns and do not trust any of the characters. As of now, everyone already appears shady as they are all capable of committing the murder that took place in the first scene.

The humorous elements felt out of the place and I felt that show might have been more engrossing without those. In the first episode, the beginning looked pretty serious with the occurrence of a grotesque murder and then it moves on to the bonding time of a group of middle-aged men who get involved in petty squabbles. But, then I got hooked on the flashback and the introduction of Hae Sook.

Moving on to the second episode, we get to see the beginning of the cracks and dents that will change the lives of Ahn Goong Chul and Nam Jung Hae. Going forward it is going to be super messy as all the dirty secrets will get peeled off layer after layer.

Graceful Friends airs every Friday and Saturday via jTBC. 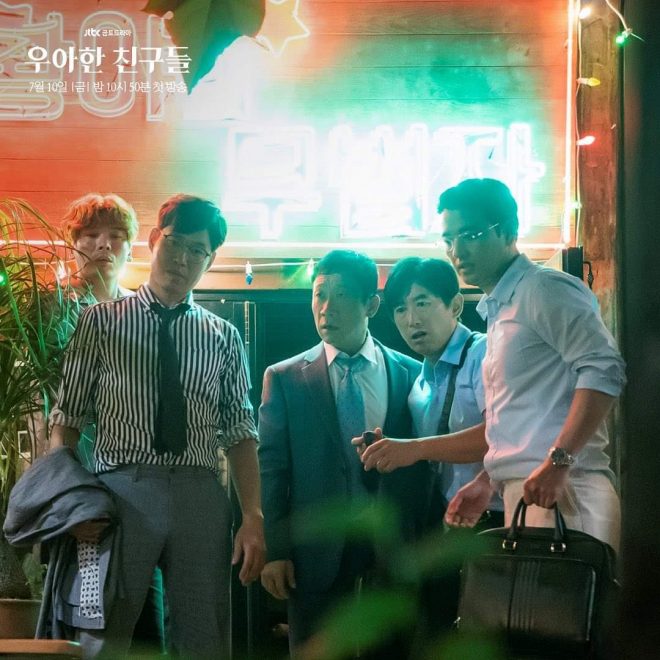