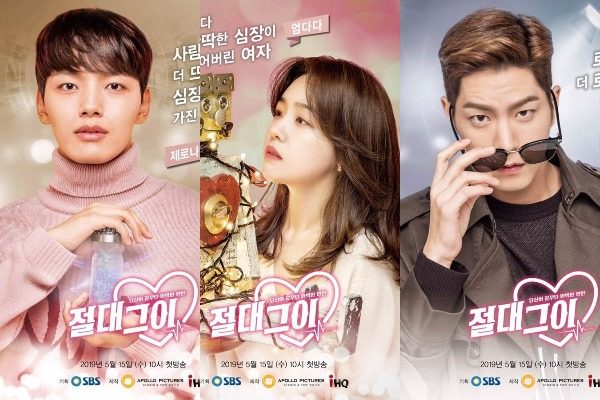 Will a robot designed to give affection changes a woman’s mind about love and cures her broken heart?

My Absolute Boyfriend explores these possibilities as Yeo Jin Goo and Bang Min Ah star in this science fiction romantic drama. Hurt by a recent breakup, Eom Da Da lost her faith in love. In a bizarre twist of fate, she ends up having an android created specifically to be the perfect boyfriend.

Their accidental kiss activated the robot. And no matter how hard she tries to tell him not to come near her, the humanoid keeps showing up and calling her his “girlfriend.” 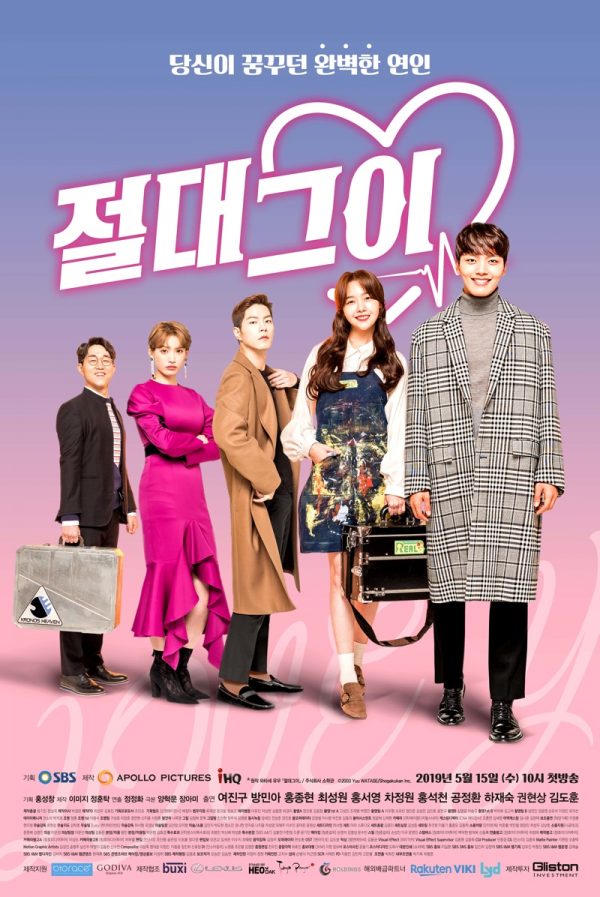 Eom Da Da (Bang Min Ah) cries over her freshly-ended relationship. Telling herself to focus on work, she opens a box and gets a surprise – a dummy which looks every inch human. Curiosity wins, and she touches the dummy, but an unfortunate thing happens as it detaches from the box. Losing her balance, the dummy falls on the couch and she lands on top of it and inadvertently gives it a kiss. 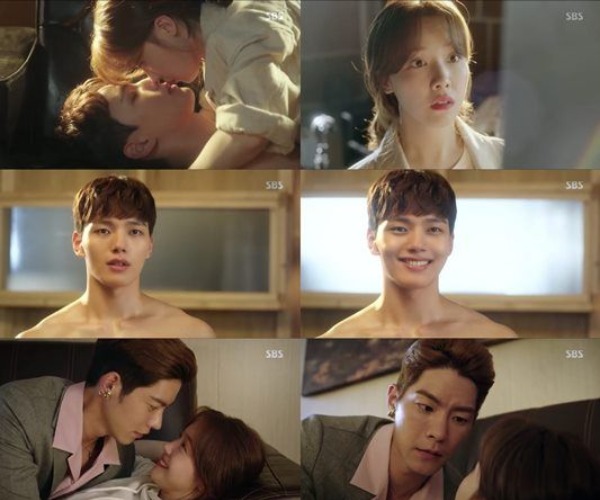 A flashback to an earlier time shows that Da Da receives a frantic call from her colleagues. It is about an urgent request for more artificial bodies. At the same time, the director asks the lead star Ma Wang Joon (Hong Jong Hyun) if they could take a ten-minute break to which he coldly accepts. The director then goes outside to admonish the special effects and make up team. Da Da arrives, and as the team leader, she agrees to do it. However, in order to accommodate the request, she changes the script which irks the director. The drama resumes shooting with the revised script and Da Da’s team manages to successfully use a single dummy for multiple deaths.

The Director angrily seeks her out and accuses her of crossing a line. She apologizes but the man yells at her that even her legendary father had never attempted altering a script during an emergency situation. Meanwhile, in a sophisticated lab, a man reads a story to a younger male who argues that as he is born to give love, it is only right to give everything and anything to the one he loves. The man Nam Bo Won (Choi Sung Won) shows a racy video to Zero Nine (Yeo Jin Goo) a humanoid-robot in training. 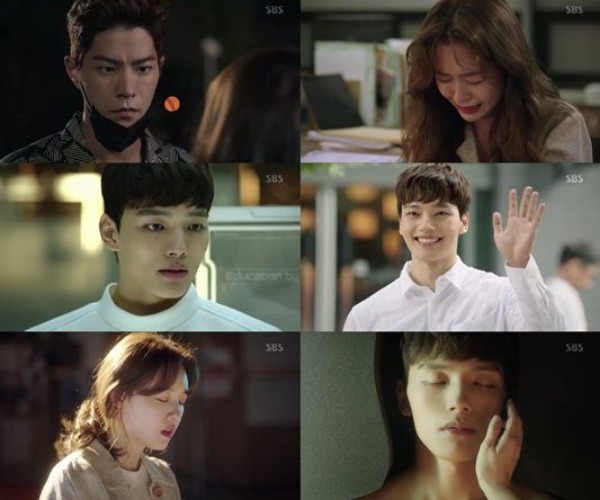 Nam Bo Won’s superior instructs him to prepare Zero Nine for a test, which means the robot is going out in the field. As Zero Nine ventures out of the confines of the laboratory, people who sees him immediately warms up to him. Zero Nine mesmerizes them with his wide smile and amiable attitude.

Ma Wang Joon requests for someone from the special effects make up team to remove his make up and Da Da volunteers, saying that she needs to give him a piece of her mind. In the actor’s dressing room, they argue and Wang Joon requests for his assistant to leave the two of them alone. It is then revealed that Wang Joon and Da Da are in a seven-year relationship, and only a few people know about it. Wang Joon asks Da Da for a breakup as he feels he can no longer date her in secret, which somehow rattles her. When he smiles and shows her a new script, she assumes that he is only joking and tells him not to say those kinds of things. 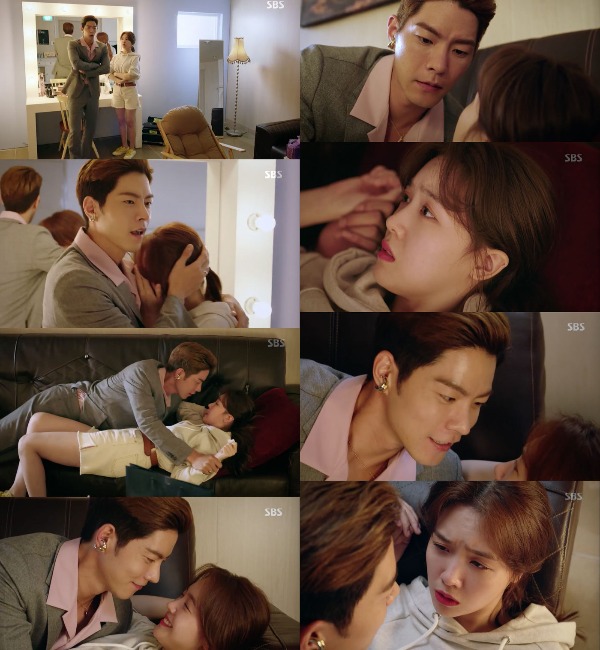 She sneaks into Wang Joon’s house to watch the award ceremony and to celebrate with him as soon as he gets home. She recalls a past conversation where he promised to mention her when he receives an award and she is anticipating the moment as Wang Joon wins. During his acceptance speech though, he thanks the people around him, especially his manager and puppy, but he never mentions anything about Da Da. She is hurt and calls him to congratulate him for his win. However, their conversation is soon cut off as media people calls for Wang Joon. Da Da tells herself not to think of her disappointment as she should be celebrating.

A throng of people enter Wang Joon’s house for the after-party and Da Da hides inside the bathroom. Unfortunately, someone has to use it and after struggling to keep the door close, Wang Joon manages to open it and exposes her presence. When someone asks if he knows her, Wang Joon says she is his stalker. She ends up in the police station where she vents all her frustrations, which only makes her sound like a deranged fan. She is released not long after her outburst as Wang Joon requests for it according to the police. That same night, Da Da breaks up with him.

Meanwhile, Nam Bo Won discovers that Zero Nine will go to a client who has anger management issues. Someone who has history of abusing her robot. He remembers what happened to a previous product and he vows not to let Zero Nine go to her. He steals Zero Nine away and somehow manages to ship him to Da Da’s address. 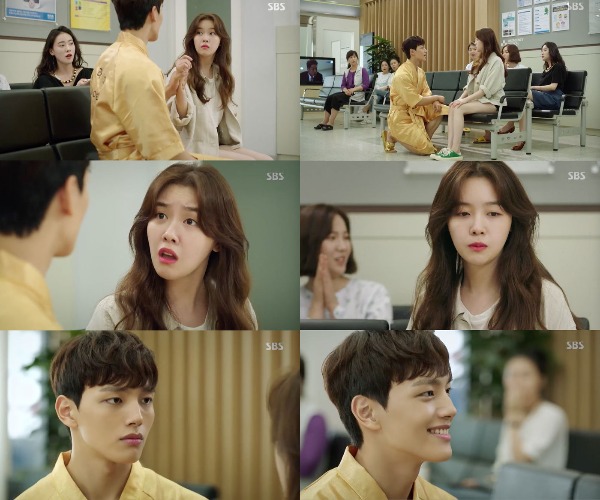 Forward to present time, Da Da freaks out when Zero Nine stands up and talks. She gets her colleagues to show them that box was not empty. She even tells them that there is a talking dummy, but Zero Nine disappears. On her way out of the set, Zero Nine shows up and she accidentally hits him. She panics and brings him inside the car to take him to the hospital.

As she is driving, Zero Nine gets up and speaks, as a result she crashes the car. She wakes up in the hospital. The nurse tells her about her handsome boyfriend, who is waiting for her outside. She goes out quickly thinking Wang Joon is the one waiting. She hears his voice, only to discover that it is from the television as his drama is currently airing.

However, Zero Nine approaches her and calls her his girlfriend. He even spills that the reason she is his girlfriend is because she kissed him. Da Da feels embarrassed at how easily Zero Nine talks about his feelings. As she tries to shake him off, she trips and almost gets in another accident but Zero Nine steps in. As a result, one of the steel bars pierces through his chest. That is when she knows he is not a real person. Nam Bo Won also appears and explains to her everything she needs to know about the robot. 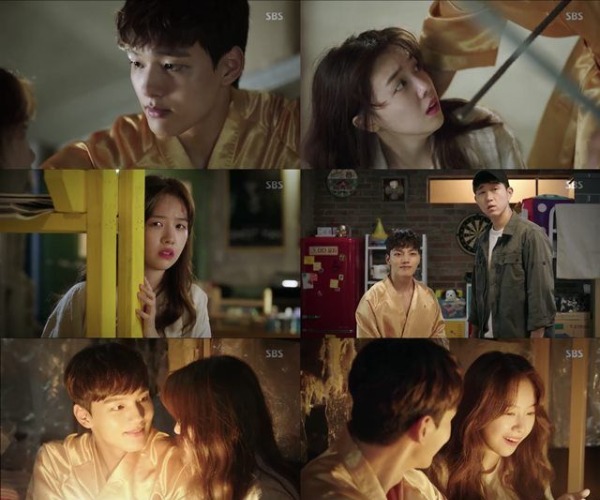 She agrees to keep him for a week as Nam Bo Won promises to take him back and do a reset after the week-long trial period. For the time being, Zero Nine will remain as her boyfriend. He also warns her not to tell people about Zero Nine being a robot. She reads the manual given to her and becomes suspicious when she hears nothing. She gets out of her room and sees Zero Nine. He tells her he has gathered data pertaining to her. He asks her if she could name him even if they only have to spend a limited time together.

Da Da gives him the name Young Gu (which literally means Zero Nine) and he beams upon hearing the it. He says the name sounds smart and that he likes it so much. The friendly atmosphere becomes heated when she discovers that Young Gu throws away his father’s record player. She retrieves it and says harsh words to Young Gu. She tells him that if it is natural for people to discard broken and useless things, then he also belongs in the trash. 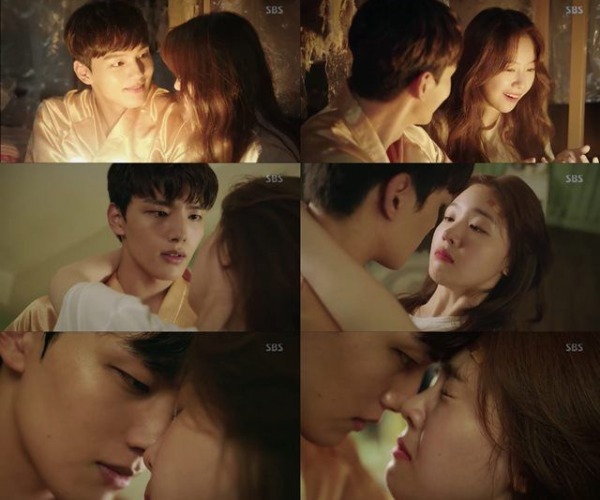 Young Gu reflects on her words when he hears an arguing couple. He almost lands himself in jail cue to his intervention as the woman claims Young Gu hits her. The man owns up to the truth and apologizes to Young Gu and Da Da. After the incident, Da Da takes Young Gu to the warehouse where the production team stores wardrobes. They take a box-full of clothes and runs away from the security personnel.

Young Gu tells her that he is going to give him all the love, despite their limited time together. She smiles sarcastically and mumbles angry words towards love inside her room. Young Gu enters and surprises her, he asks her if she is going to bed. She confirms, and he suddenly grabs her, reminding her that he is a dating companion and she should never go to bed alone.

My Absolute Boyfriend was a wonderful watch. Yeo Jin Goo’s take on the humanoid Young Goo is so endearing. You can’t help but be hooked with the character. The young actor has perfected every nuance and expressed the pure and innocent emotions you would expect from something manufactured. The company built and programmed Zero Nine as the perfect dating companion and Jin Goo nailed every bit of it. From the first scene where Zero Nine appeared, especially that scene where he showed fascination with rain drops, to applying the things he learned or inputted in his system database, his acting is engaging.

See also: Yeo Jin Goo Opens Up About Lessons Learnt From “The Crowned Clown” & New Project With IU To Challenge Himself

Also, Bang Min Ah’s character Eom Da Da is someone viewers can easily empathize with. Despite being shocked and baffled with how she ended up taking in a robot, she still shows compassion to something not human. Her heart is still aching after ending her serious relationship and the way she handles the situation is relatable.

The same goes for Nam Bo Won. He sacrificed his job (and maybe his life), so Zero Nine would not end up in the hands of an angry heiress. It is normal for people to grow affection to something. Specifically to those they help create and took care for, so his actions were justifiable. 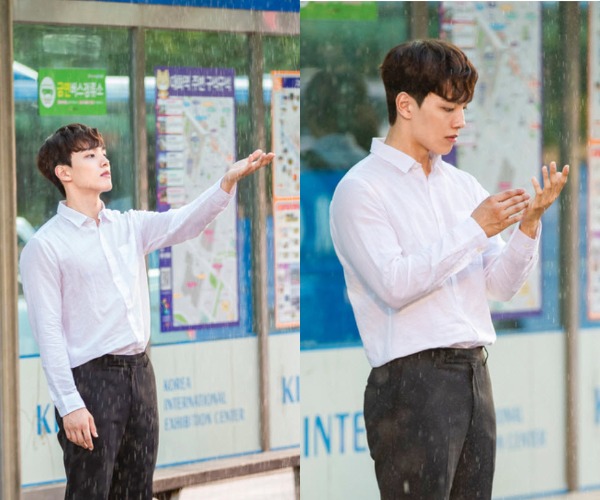 My Absolute Boyfriend depicts how complex human emotions and relationships are. It  shows that no matter how hard we try to hold on to it, something always got to give. Da Da and Wang Joon were together for seven years. Even though she longed for a normal relationship, she accepted the reality that she can’t have one. All because of her boyfriend’s celebrity status. However, being labeled as his stalker became the final straw and she snapped. It is interesting to note that Wang Joon is completely hurt as well. He is probably thinking of how their relationship ended the way it did.

In My Absolute Boyfriend, Da Da spent seven years in a secret relationship, so she must be confused. With Wang Joon, everything they do must be in private but here comes Young Gu. The robot is so open in expressing his feelings and very showy with his affections. And with her tendency to break every machine she touches, I think she has already broken something in Young Gu. That one-week trial is going to be messy, complicated and yet for sure, fun. This makes me so eager to see how the major characters deal with the situations that arises within.

Catch the episodes of My Absolute Boyfriend as it airs on SBS every Wednesday and Thursday at 10PM.