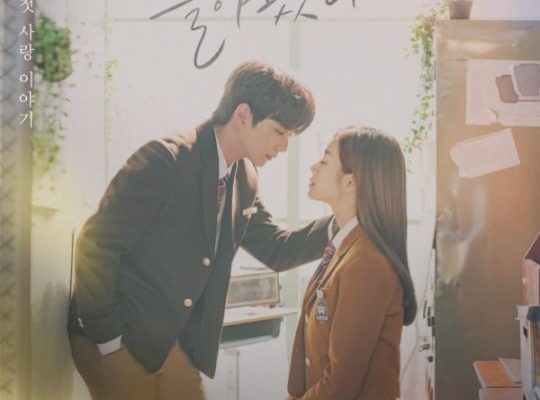 Key Highlights In Episode 5 & 6 Of “My Strange Hero”

My Strange Hero is off to a good start.

The storyline is solid and is clear in the direction it’s going. The actors are doing a great job and the cinematography evokes just the right emotion matching the scene.

As they are now all back in school, we are gearing up to see just how Bok Soo plans to execute his revenge.

Competition between Bok Soo and Se Ho Start to Escalate

As Book Soo returns to school, he is greeted by a news conference and reporters swarming all over him. He realizes he is being used by Se Ho to improve the image of Seolsong High School.

Se Ho has recently been appointed as the school chairman and he announces the new direction he wishes to take, and as his first step, he allows the re-admission of Bok Soo back to the school.

The animosity Bok Soo feels for Se Ho is clearly written all over his face, and he charges onstage to square with Se Ho. At the last minute though, he puts his fist down and changes his mind. Instead, he reaches out to shake Se Ho’s hand.

Soo Jeong Gets Accepted as a Permanent Teacher

Much to the surprise of her co-teachers, Se Ho announces that Soo Jeong is now a permanent teacher in the school. Instead of being delighted, Soo Jeong appears confused about it.

She confronts Se Ho about the announcement and tries to back out because she wasn’t able to do what they discussed about bringing Bok Soo back to school. Se Ho says that she got promoted because of her students’ getting the highest points in class.

Clearly uneasy by his presence, Soo Jeong struggles to act professional around him as she discovers she is his new homeroom teacher. They confront each other before class and Bok Soo reveals that Soo Jeong doesn’t know why he quit school nine years ago. She brushes him off however and asks him not to look down on her. She tells him that a fake will never last long and that’s why they ended up this way. If Bok Soo was sincere, then he wouldn’t have left her like that.

After 9 years of harboring hurt over the past, this seems to be the opportunity for them both to settle their issues. I hope this is their chance to finally patch things up and rekindle their romance.

Soo Jeong’s new homeroom class is a group of problematic students led by Bok Soo. The students greet him like a hometown hero.

Teachers dread teaching this group of misfits and lumped them all together. Soo Jeong, being the new permanent teacher, had no choice but to accept being their homeroom adviser.

Later on, Bok Soo realizes that his nephew is also part of the Wildflower Class. He sees his nephew being bullied by his classmates. As much as he wants to defend In Ho, his nephew stops him because he doesn’t want his uncle to intervene.

The caring samchun is frustrated that he can’t defend his nephew. He tries as much as he can to help In Ho out by buying the bulgogi burgers etc. But remember, during his time in high school, Bok Soo fearlessly fought against bullies to defend the bullied. So to just have to stand by and watch his nephew being bullied must be disheartening for him

The Complicated Weave Around the Three Leads

The drama jumps back and forth between nine years. We see Se Ho as a new student who is diligent and likes exams. They’re actually friends of Bok Soo in the beginning. Bok Soo is clearly infatuated with the young Soo Jeong.

We finally see what happens on the rooftop. Kang Bok Soo confronts Se Ho angrily about Soo Jeong. Se Ho is highly competitive and doesn’t want to lose to anyone.

Bok Soo feels bad for Soo Jeong, and Se Ho asks him why he didn’t feel bad for him. Se Ho stands at the edge of the roof and Bok Soo runs to save him. Se Ho removes his grip and falls off. Se Ho frames Bok Soo neatly, making it appear he pushed him off the roof when he was actually trying to save him.

Just like nine years ago, the trio meet again on the rooftop. Se Ho is standing at the edge of the rooftop. Kang Bok Soo stands behind him. Soo Jeong watches them both.

Se Ho may be picture perfect on the outside, but his family life is clearly something else. His mother, former school chairman, didn’t know of his seafood allergy when she had dinner prepared. Se Ho looks like he nearly died when he was forced by his mom to eat. Something seems amiss in this relationship.

We’re settling in as the story begins to unravel. Nine years after that fateful incident, Bok Soo, Soo Jeong and Se Ho are all back in school. I’ve repeatedly stated how in awe I am of Yoo Seong Ho. In addition to his charming visuals, he’s got great acting skills to match. Bok Soo’s frustration was really evident when he found out his nephew was being bullied. He showed great restraint in not hitting the mean student who was bullying his nephew.

Se Ho, brilliantly played by Kwak Dong Yeon, is elegant and dignified. Dong Yeon impresses me with his versatility in his acting.

I’d say that this drama is shaping up pretty nicely. The story is being told well and they’re giving us a neat balance between the revenge and the first love Bok Soo and Soo Jeong had in the past. The drama is becoming more exciting as each episode unfolds more of what exactly happened nine years ago.

Catch more of My Strange Hero every week on the KPLUS Channel.

ABOUT THE WRITER
Nicole is currently juggling motherhood, her job, and her immense love for K-dramas and K-pop. On most days, the latter wins.  Sleeping can wait – this is her motto as she eagerly devours episodes of her favorite K-dramas. Her absolute favorite drama would be Weightlifting Fairy Kim Bok Joo.