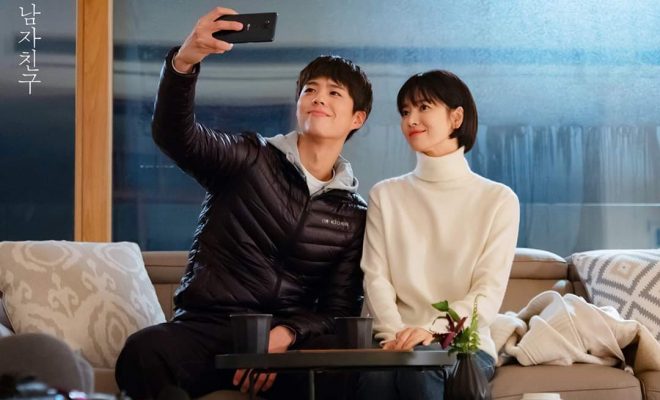 Park Bo Gum portraying the role of boy-in-love Jin Woo in Encounter is such a stress reliever.

Crossing halfway mark of its series, the romance bliss, as well as complications that would come with it, brings out the emotional layer of the narrative.

Bravely responding to the challenge question raised in the hotel launch press conference, Soo Hyun affirms the getting-there relationship she is currently in. The other half of that almost-there relationship, Jin Woo, walks on a cloud nine upon hearing it.

Enraged from her daughter’s announcement, Soo Hyun refuses to go with her mother in seeking apology to Chairwoman Kim. She tells her mother that she will start living her own life.

Busy wrapping up from the launch, the PR team stops what they’re doing when Soo Hyun visited the department’s office to thank them for the hard work.

Jin Wook worries about the after-effect of the announcement but Soo Hyun is resigned to stop her vague identities by vowing to live a life that is entirely her own.

Woo Suk broods about that moment when he witnessed Soo Hyun fixing Jin Wook’s necktie. Chairwoman Kim meets Director Choi to fix the ruckus that happened in the launch.

Meanwhile, Hye In tells Jin Hyuk about the strange man who offered her promotion in the company if she will write an anonymous post about him and Soo Hyun.

While waiting for Soo Hyun, Woo Suk’s car pulls over to where Jin Hyuk is standing. The ex-husband confirms if what Soo Hyun said in the event is true. Jin Hyuk affirms and also asks him why he checked on him. Woo Suk responds that he looks after him as a brother.

Soo Hyun and Jin Hyuk meet up for dinner. Announcing he wants to stop the “pre-relationship”, Soo Hyuk grabs a glass of water thinking all she did will go to a waste.

It turns out that Jin Hyuk wants to stop to make everything real. She returns his joke, saying she does not want to move on yet from the first stage. The love birds list down the dating plans they are about to fulfill.

While working on a year-end party theme, Jin Hyuk gets a surprise visit from Director Choi who told him of his transfer notice. The latter warns Jin Hyuk not to mention it to Soo Hyun explaining that their coming out of relationship already aggravates the CEO’s position.

Pondering on his options, Jin Hyuk jogs to Soo Hyun’s house with an excuse that he did it because he misses her and he does not have any pictures of her in his phone. They take some pictures together for him to keep.

Meanwhile, Woo Suk also broods about the day when he painfully asked for a divorce from Soo Hyun. Later, he meets his lover and requests to end their meetings.

The transfer notice has spread with the PR team perplexed on the sudden appointment of Jin Hyuk. Hye In comes to the rescue of Jin Hyuk and uses Manager Kim’s phone to call Soo Hyun. After learning of what happened enroute to the airport for her Shanghai business trip, Soo Hyun goes back to the hotel to ask for Director Choi. Upon hearing his girlfriend is back, Jin Hyuk rushes to go to her office.

Whew! Amidst the subtle thrill and melodrama tone, Encounter really has a way of leading the audience to bite their nails in anticipation.

We know that the reversal of roles is the biggest charm of this drama. We get the heart flutters from Jin Hyuk’s perspective and our amazing heroine gets to save her dapper-boyfriend-in-distress because of her character illustration. But the fading seconds of the series raise woes since Jin Hyuk’s self-sacrificing nature is evident.

As Encounter reaches the part where conflicts keep piling up testing if love can keep our favorite love birds alive, viewers would naturally root for them and dread the evil tactics the villains are set to unravel.

I hope Woo Suk remains a black knight to Soo Hyun and not join the cause of the baddies’ camp. Sometimes I want Soo Hyun and Jin Hyuk to just escape to say Cuba for example, because it is hard to reconcile the idea of what power they two can have, aside from love, against those people antagonizing them.