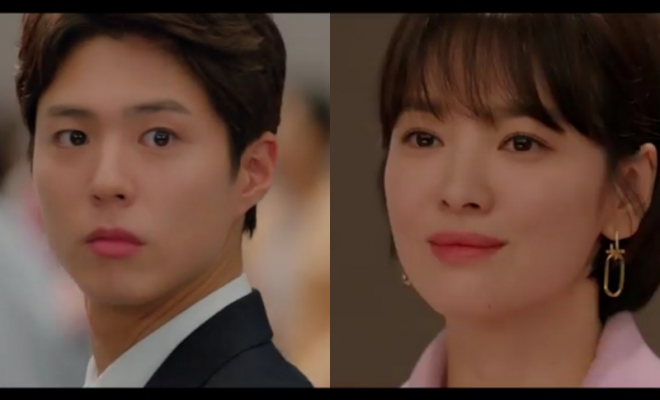 It is hard not to smile on the “getting there relationship” introduced in Park Bo Gum and Song Hye Kyo’s Encounter.

Acquiescing to take baby steps in a new world they are both happy about, the love birds of Encounter made us envious on its sixth episode. This week, episodes 5 and 6 raked in impressive 8.5% viewership ratings nationwide as romance starts to officially blossom for the lead characters of the story.

Kicking off the “pre-relationship” stage of their romance, Jin Hyuk and Soo Hyun celebrate it with a bike ride and a coffee shop date.

When they settle in their private spaces, they are both the cutest, savoring the sweet moment of their new beginning.

2. Ex-Husband to the rescue

Encounter lets us meet the kindest and most rational chaebol who has ever graced K-Dramaland. That’s if he won’t change as the story progresses. So far though, we appreciate how his love towards his ex-wife matters more, prompting him to protect her from his mother’s excessive and mindless meddling on Soo Hyun’s life.

Woo Seok meets with Director Choi, his mom’s crony in the hotel, and warns him that no one deserves Donghwa hotel, but Soo Hyun.

Heeding Ms. Lee’s words about his relationship with his boss, Jin Hyuk assures his ajumma friend that he is willing to take the risk.

Soo Hyun finds herself in front of Ms. Lee’s house after her meeting for the Cuba hotel arrangements. She slumps on the wheel of her car not knowing how to proceed with her sudden action. Jin Hyuk spots her and happily welcomes her.

Deciding to have a quick walk, Soo Hyun shares how the hotel has been everything for her. Revealing how she made it successful, listening Jin Hyuk express admiration to her feat.

Wanting to prove her acceptance of their “meaningful relationship”, Soo Hyun reaches for his arm while walking side by side. Unable to contain the bliss of that moment, Jin Hyuk holds her hand for the first time.

Prior to meeting Jin Hyuk, Soo Hyun bumps with Woo Suk when she dropped by at a store to buy some clothing for her father. Reminded of Jin Hyuk, she also buys a neck tie for him

When she gives it to him after their quick walk, he happily accepts, revealing it is the first necktie gift he receives from someone. Soo Hyun responds that it is the first time for her too.

It’s the day of Donghwa hotel Sokcho launch, and the PR department where Jin Hyuk belongs is busy. Initially, they encounter problems with celebrity guests, but black knight ex-husband Woo Suk scoops in to help out the attendees with whom he is acquainted with.

Clueless of his identity, Jin Hyuk later learns that he is Soo Hyun’s ex-husband. Jin Hyuk bumps with Soo Hyun who is on her way to the venue of ribbon-cutting ceremony. But she stops on her track, when she sees Jin Hyuk not wearing the necktie she bought.

He explains having a hard time putting it as he is used to zipper neckties. Soo Hyun orders him to take off the necktie, and puts the one she bought for him. Unbeknownst to them, Woo Suk saw that sweet moment.

Chairwoman Kim converses with Soo Hyun’s father about the merging of their political parties, but the latter gives a vague response amidst the villain’s warning.
Spotting Jin Hyuk, Chairwoman Kim tells her minion to call him, and lashes out unpleasant words that Jin Hyuk does not deserve. Woo Suk comes into the picture, indirectly rescuing his ex-wife’s man.

Heaving a sigh of frustration, Jin Hyuk ponders how exasperating Soo Hyun’s life must have been to put up with harsh words from her mother-in-law after all those years.
Back at the hall for the press conference, Soo Hyun thanks the attendees for coming to the event. Just as she prepares to leave the stage, the sly reporter planted by Director Choi hurries to throw in questions about her dating scandal.

Politely to answer the question but the reporter insists. Just as Jin Hyuk quietly walks away, he heard Soo Hyun’s sweet admittance that they are in the process of getting into a relationship.

Park Bo Gum’s portrayal in Encounter is set to become one of those K-Drama poster boyfriends that all women would ever dream of having. Delighting us with all those “interesting places” he knows about is something I look forward to each week.

In K-Dramas, we usually get the heart-flutters through the female lead’s perspective. But in Encounter, just like that necktie scene when Jin Hyuk hit the jackpot of getting physically close to Soo Hyun with the latter telling him not to smile was simply cute and refreshing. On that note, I am enjoying the refreshing blend of this rich-girl-poor-boy romantic story.

Woo Suk is also a character I am rooting for, I will stop of course if he gets blinded by jealousy and resorts to come between the adorable love birds. But there is something in his character that draws empathy, probably because he is not as ruthless as his textbook villain mother.

Seeing Soo Hyun muster courage with all she has to protect Jin Hyuk is the highlight of episode 6 of Encounter. Publicly admitting her involvement with Jin Hyuk looks to spur looming problems for them both. But I like that she is taking it one step at a time, and she looks intent to live the life she chooses.

Encounter airs every Wednesday and Thursday on tvN.

Fans can watch it on VIU, tvN and tvN Asia.