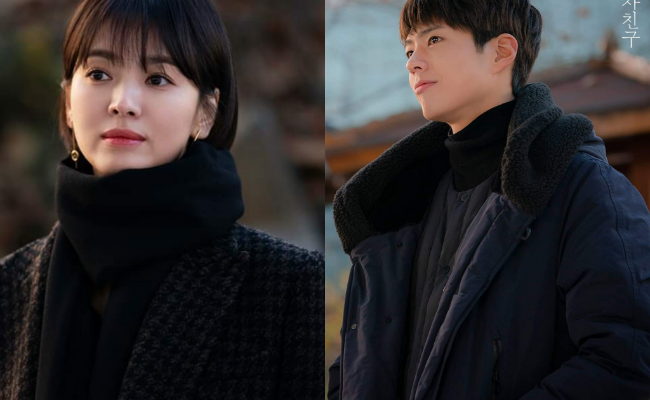 Romance is officially blossoming in episode 5 of Encounter!

Albeit a looming conflict ahead, Encounter preps up to traverse heavier plot direction following this week’s events. 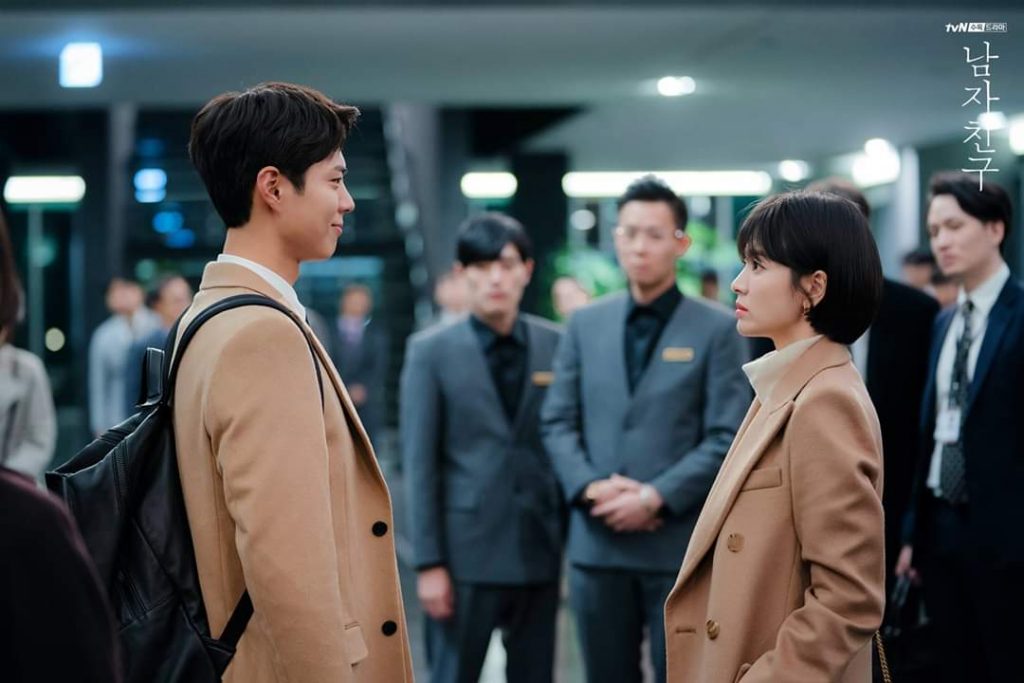 The aftermath of Jin Hyuk’s bravery to save damsel-CEO-in-a-lobby-distress unfortunately needed not just courage to protect Soo Hyun’s position in the company, it also requires for them to be at each other’s side, now that they are keen to be together in fulfilling their romance. 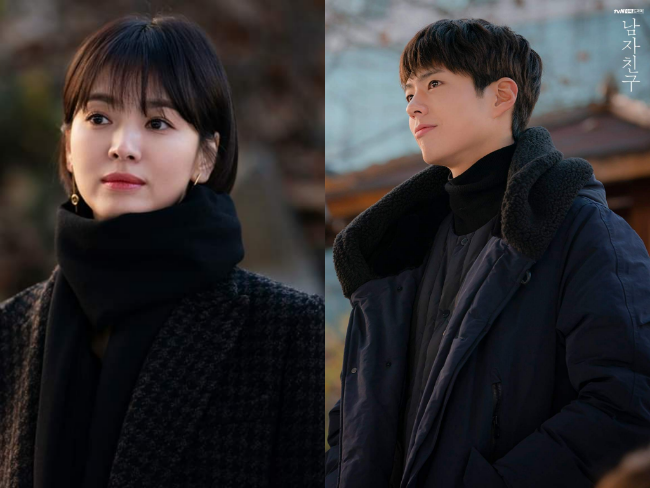 Following Jin Hyuk’s lead, Soo Hyun obliges to his ramyun date request. Disregarding the collective gasps from the people in the hotel lobby, she follows her brave employee. Mi Jin (Soo Hyun’s friend and secretary) sulks on the scenario that just happened. Realizing the impact of the implied admittance, she tries to send off Jin Hyuk, but Soo Hyun protects him.

The two end up dropping off Mr. Nam and Mi Jin as they head to another Jin Hyuk’s “must-visit” place list. This time around, it’s a house that serves impressive tea.

Owned by the wife of the man who gave Jin Hyuk his camera, the two sip some tea to calm down the emotions that surged high due to the hotel lobby event.

Standing by his firm decision to be by Soo Hyun’s side, Jin Hyuk is resolved to the idea of nurturing the “meaningful” relationship with her. 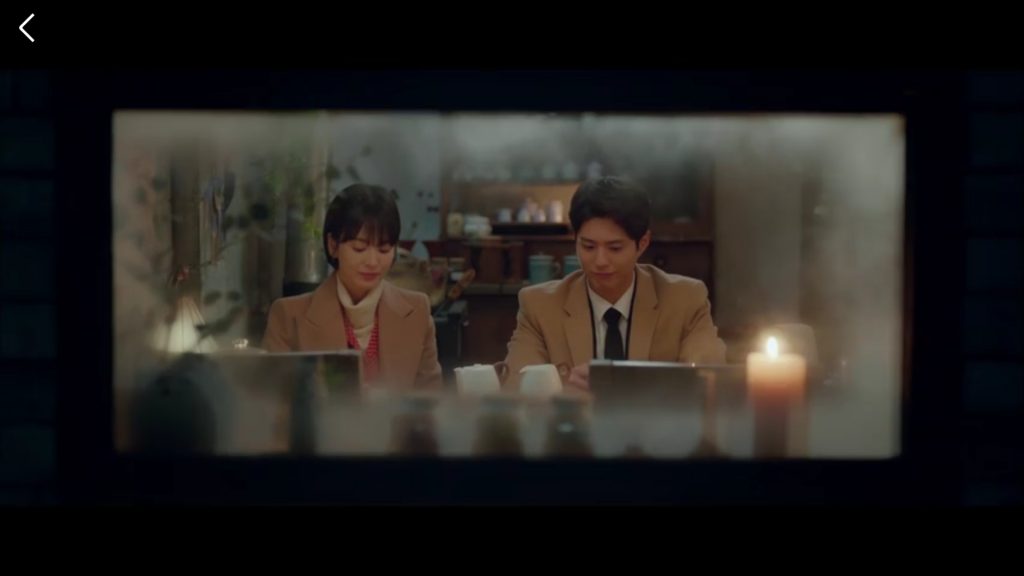 After getting kicked out by her friend, Mi Jin goes to Moon Snail restaurant to ask hyung Dae Chan to summon Jin Hyuk. The latter arrives at the place, and through the intoxicated blabs of Mi Jin, he listens to more of Soo Hyun’s sad stories.

Sitting on his calming place at a local playground, Jin Hyuk ponders on how Soo Hyun has lived a life that has never been her own. He sighs empathizing how agonizing her life has been. 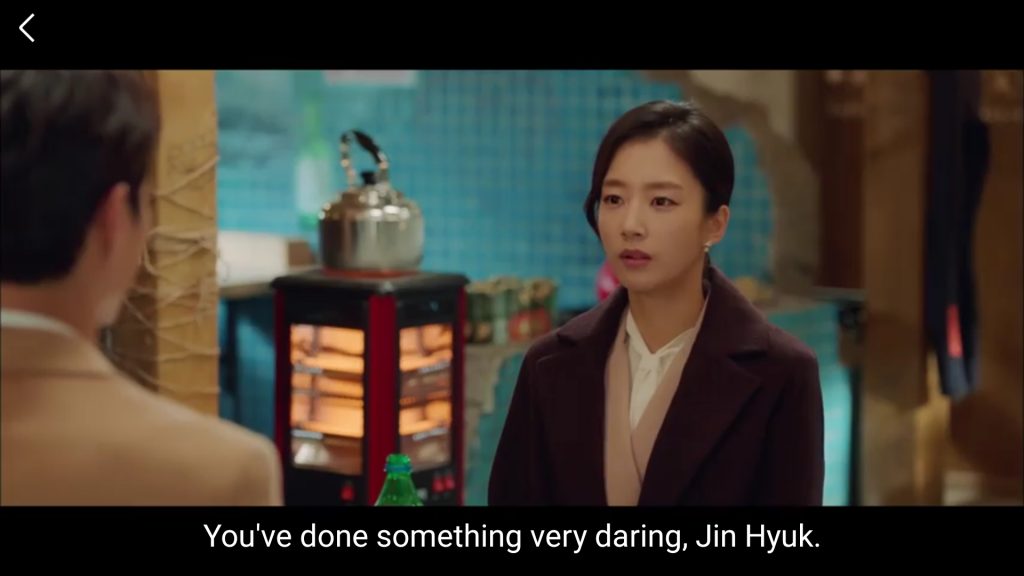 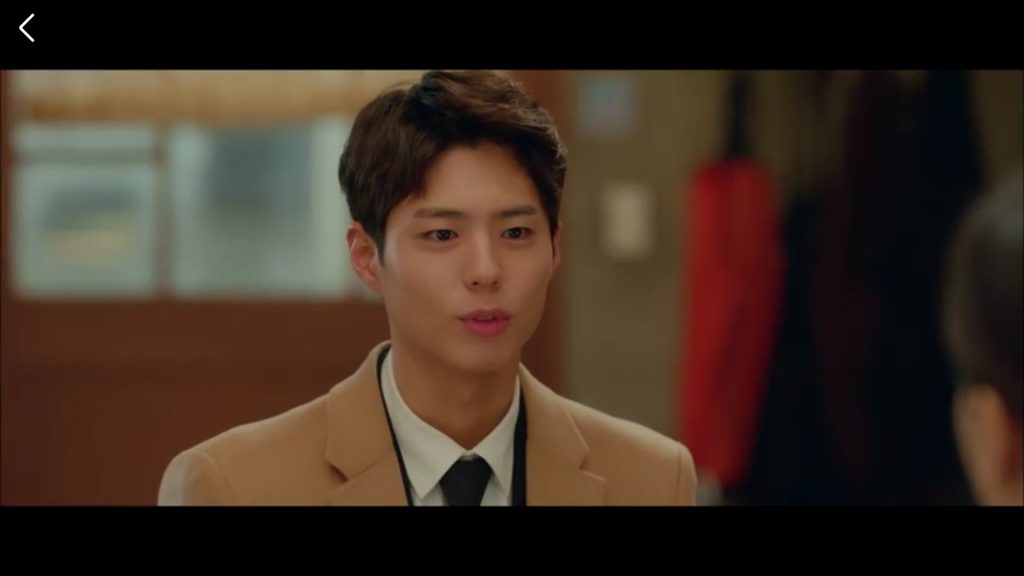 As expected, Jin Hyuk receives plenty of gazes and murmurs at the hotel the next day. Feeling the weight of the people’s stare and silent judgmental mocks, he goes out to brood alone. Mr. Nam and Soo Hyun spot him so she sends him an encouraging text message.

He then invites her to visit the art gallery in his neighborhood. She hesitates at first, but gives in to the invitation. Little does she know that the gallery is a popular exercise walking ground, with photos hanged aligned on roadside posts. 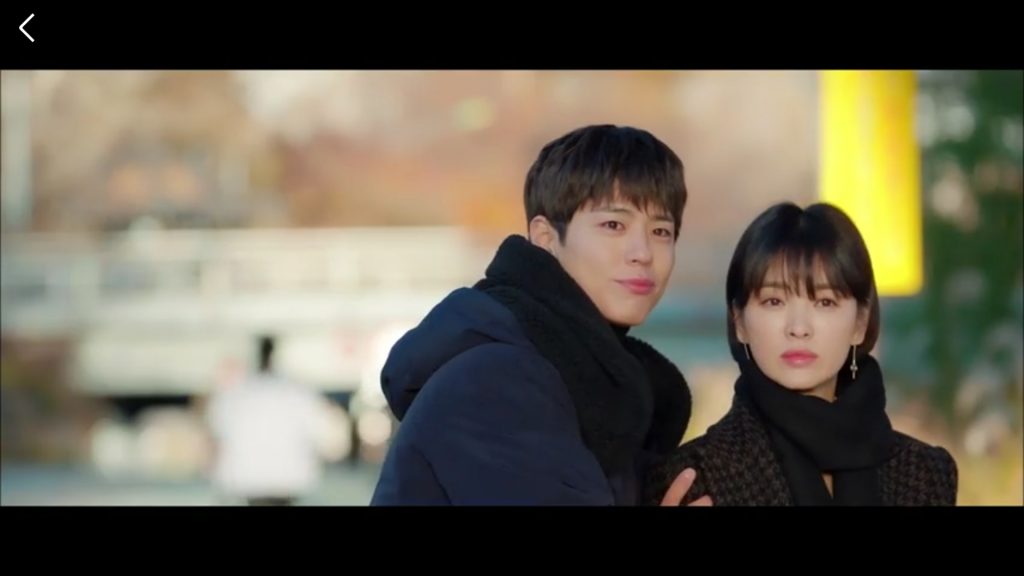 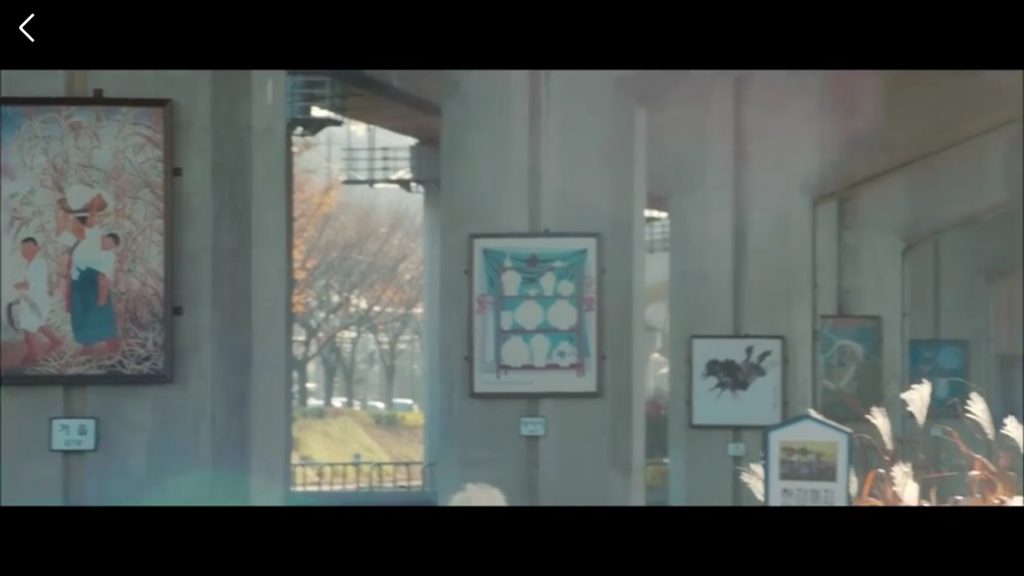 Jin Hyuk’s best friend, Hye In, arrives at Dae Chan’s restaurant, and spots her secret love with their boss. Another flashback of her memory with him makes a sad loving-from-afar moment for her unrequited love to her best friend. She also recalled how Jin Hyuk’s attended her graduation when her father failed to attend it. 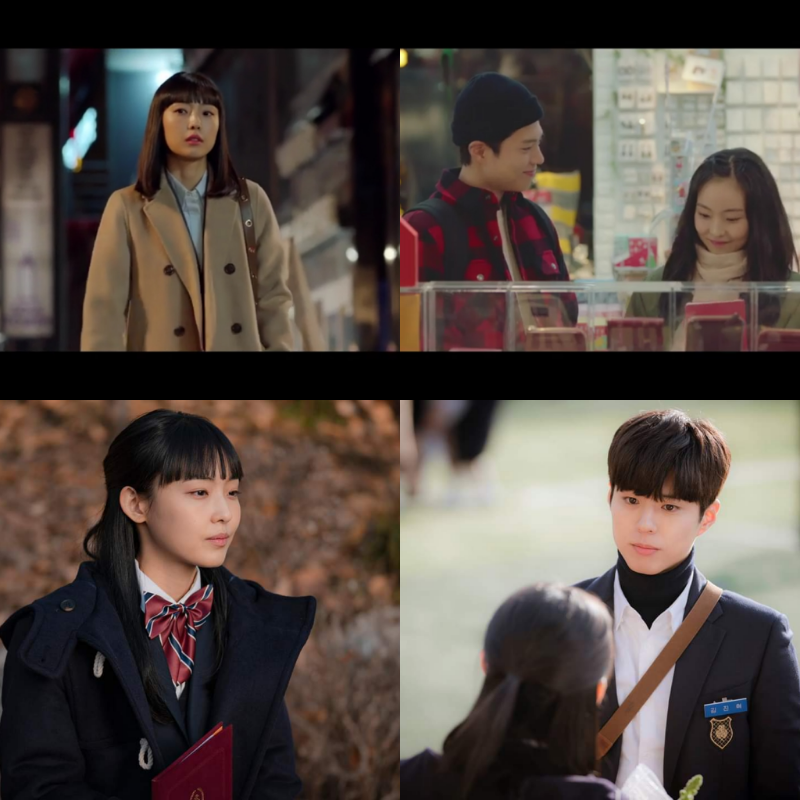 Meanwhile, Soo Hyun’s ex-husband Woo Seok goes on the same reminiscing mood, remembering when he meets Soo Hyun for the first time. He relives the vivid memory of meeting the girl of his dreams, all willing to follow her mother’s wish to marry him.

After overhearing the lobby incident from his mother, he orders his secretary to dig on Jin Hyuk’s background. 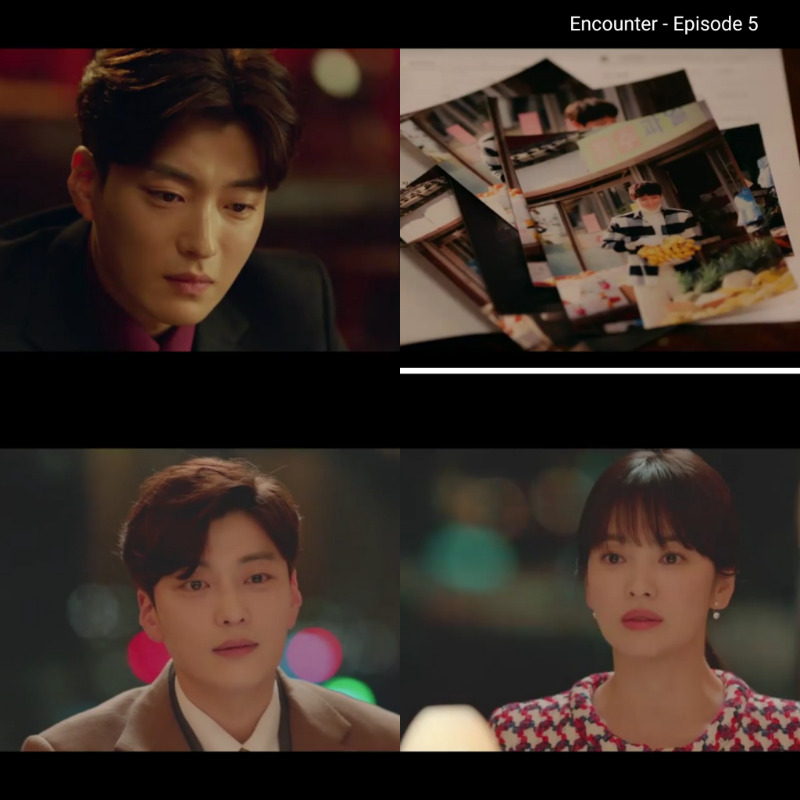 After a pleasant dinner, Soo Hyun drives home with Mi Jin. The latter breaks the silence about the dangerous path she is threading with Jin Hyuk. Reminding her that she cannot protect Jin Hyuk from everything, Soo Hyun responds that she is aware of it. But she can only utter how she seems trapped to stay in the situation, blaming the “bad timing” for not making it work out for her. 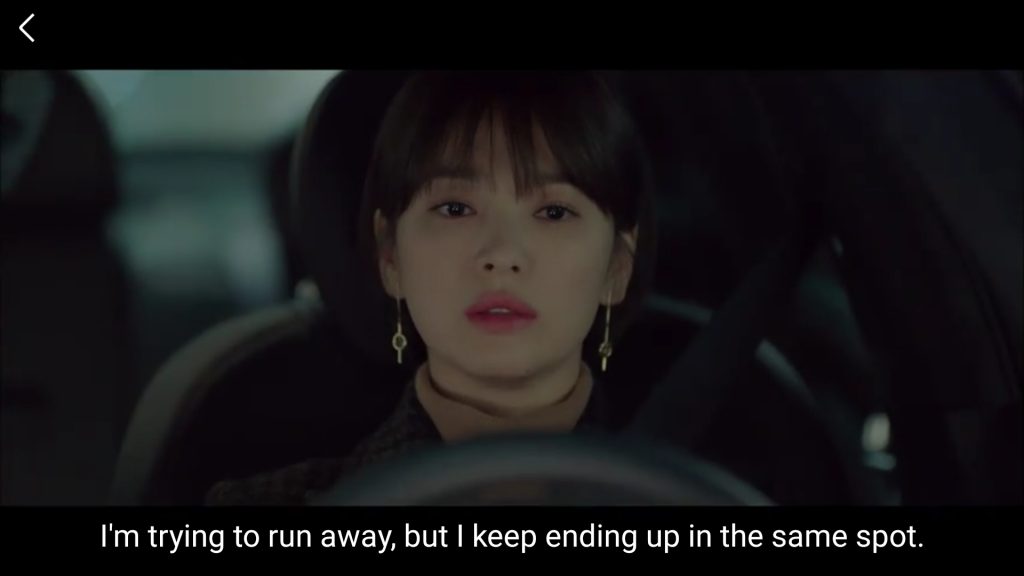 Upon spotting mom in her place, she goes back on the road, and drives aimlessly thinking about the stormy path ahead with the man who has been making her happy at a risky cost. That same moment, Jin Hyuk also thinks about her.

Soo Hyun finds herself back at Jin Hyuk’s neighborhood gallery, staring at a painting she saw earlier with him. 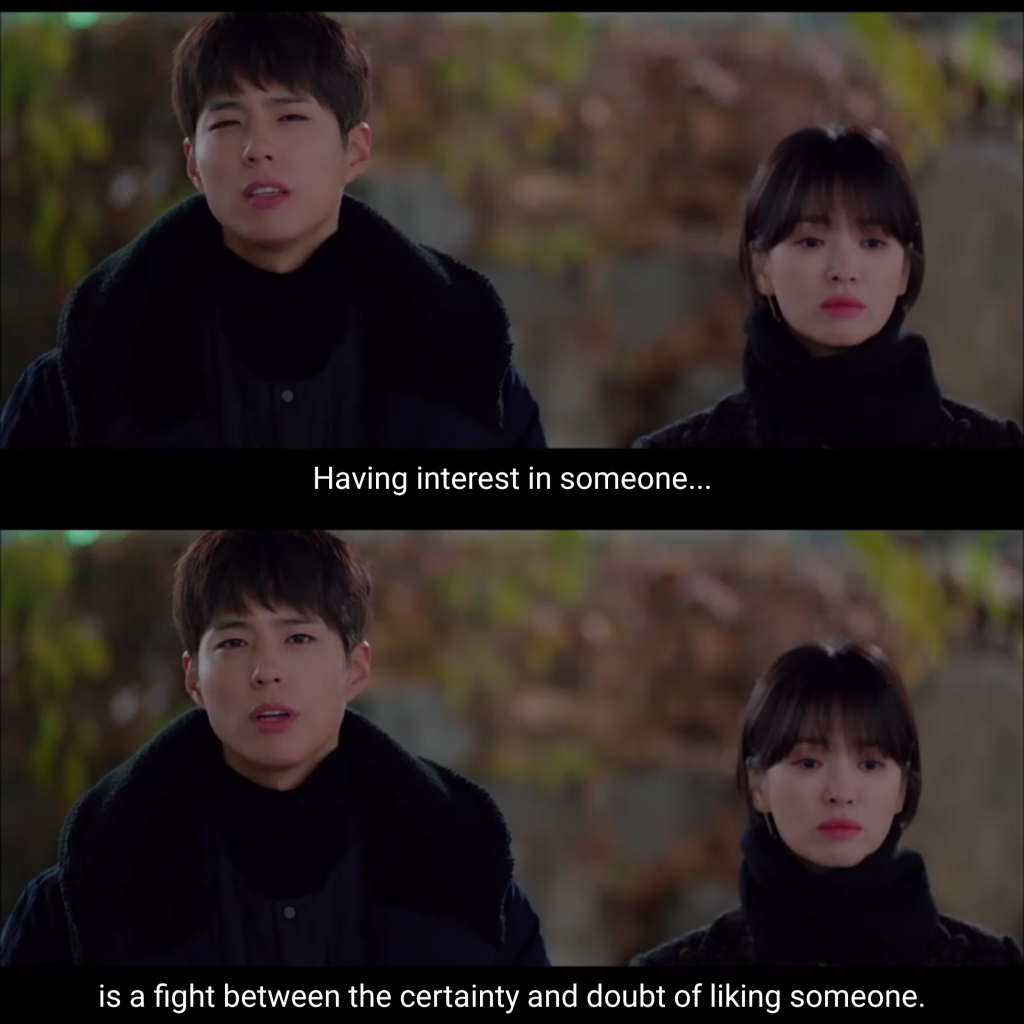 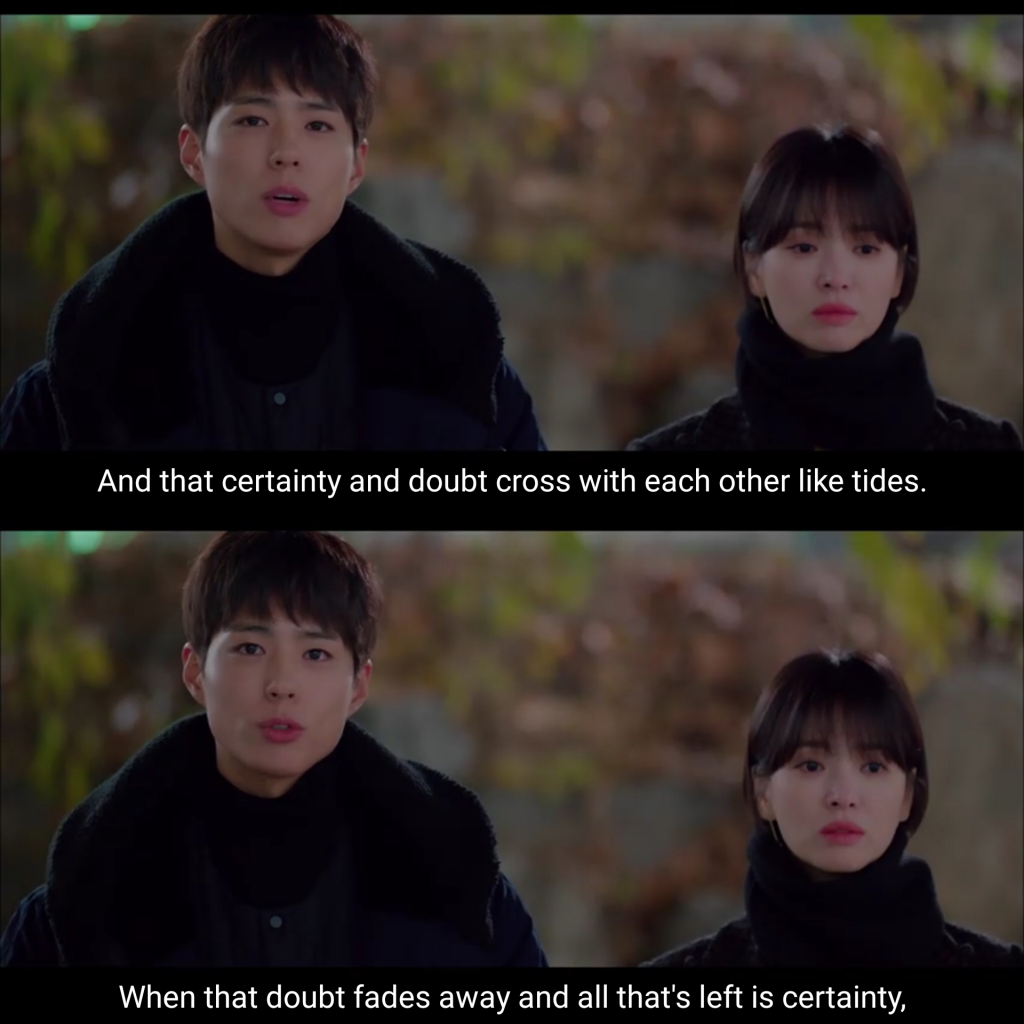 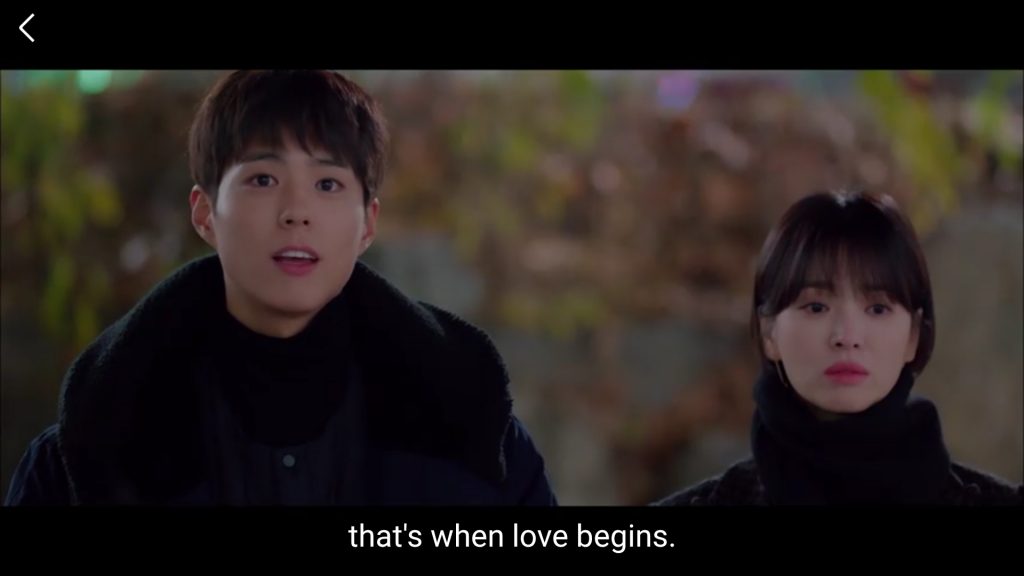 Just then, Jin Hyuk arrives evidently pointing out another “meaningful encounter” that happened between them.

Taking another step to the mutual feelings obviously shared by them, Jin Hyuk proposes for them to “slowly” enter a relationship. 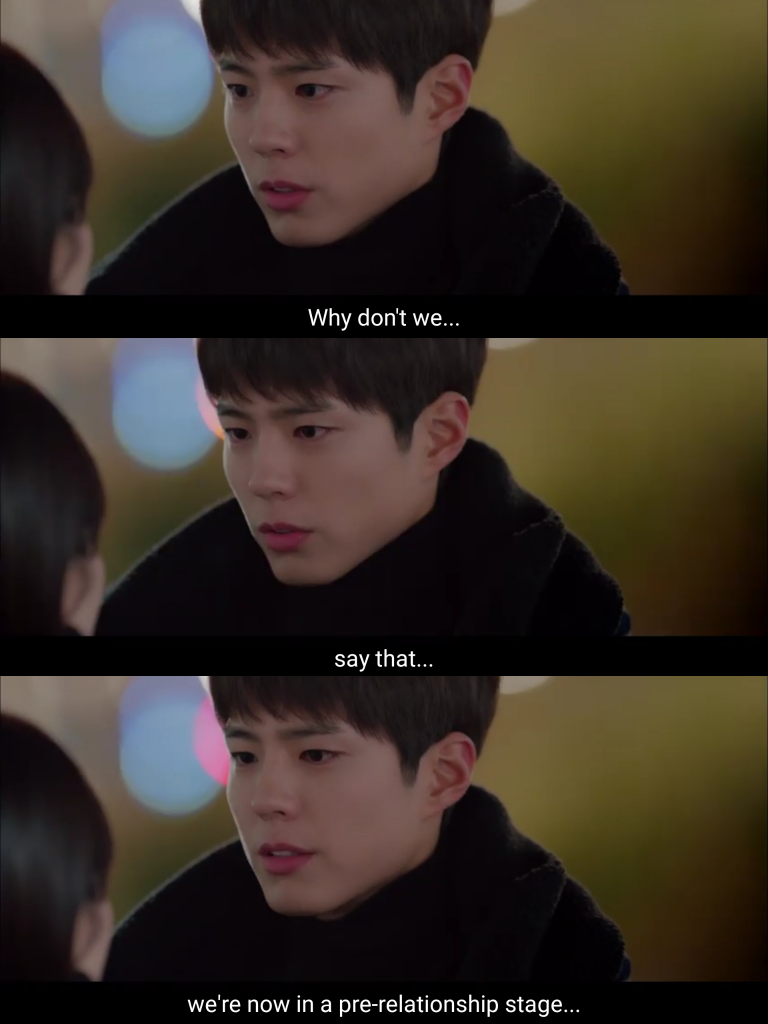 Park Bo Gum and Song Hye Kyo just labeled a new stage in love relationship, and I just can’t help but chuckle. Is the baby step phase of this fictional romance needed? I would say yes since the drama pretty much established how Soo Hyun’s restricted life is already a handful. For that reason, her desire to protect Jin Hyuk will be just as hard since she struggles on her own.

The sad love angles of Hye In and Woo Seok I think would also yield major plot development in the future. Since we can never predict the possibilities of them to go greedy on their emotions.

Initially, I mentioned how the drama has been taking the reversal in having the heroine take the lead. We usually get the leading man entangled in a web of complications trying to make the love work, but Encounter has been choosing the opposite path.

What’s interesting though is how it is slowly shifting to make the hero hold the reign, but still keeping the vulnerable elements of his character. In a way, it is drawing the impression that the story’s focal character is Jin Hyuk, when I thought it was the heroine.

Just like Soo Hyun, I’m sure loyal fans feel compelled to protect Jin Hyuk as well. Even when we still don’t know the extent of unfortunate event that will befall them, now that they mutually acknowledged they can’t hide their emotions anymore.

There is a storm ahead for Soo Hyun and Jin Hyuk. That we are sure of. It is scary even for viewers like me, but crossing the halfway mark next week, it would be inevitable.