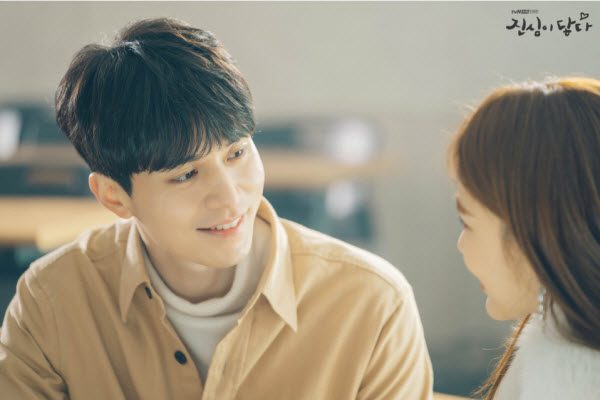 Key Moments In Episode 4 Of “Touch Your Heart”

It was an episode peppered with awkward but cute and sweet moments. It also gave a peek on what happened to Oh Yoon Seo two years ago. 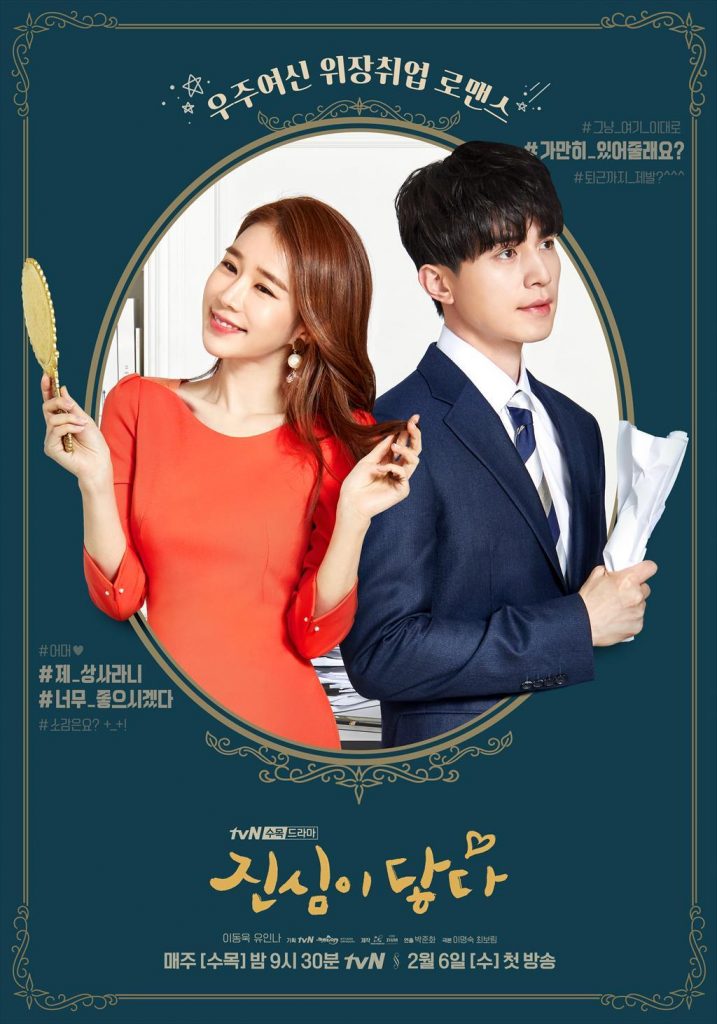 After complimenting her on a job well-done, Jung Rok wraps Yoon Seo’s scarf around her neck. The gesture catches Yoon Seo off guard and causes her to blush.

Back at the office, Secretary Yang stops Yoon Seo to ask if it is true that Jung Rok reverses the plea on Yoon Ha’s case and she confirms. The receptionist blurts out that she finds it attractive how lawyers turn the tables and asks if Yoon Seo finds Jung Rok attractive. She says she does not think of him that way.

She pretends to read a book when Jung Rok steps out from his office. He bids her goodbye and that he will see her after the weekend. Yoon Seo stops him on his way out. She demands a reward for her help in making Yoon Ha open up to them. She says she needs help in her study as there are things she does not understand from the books she’s reading. Jung Rok agrees to meet her the next day, but since he is meeting an old professor of his, they agree to meet at a school campus. 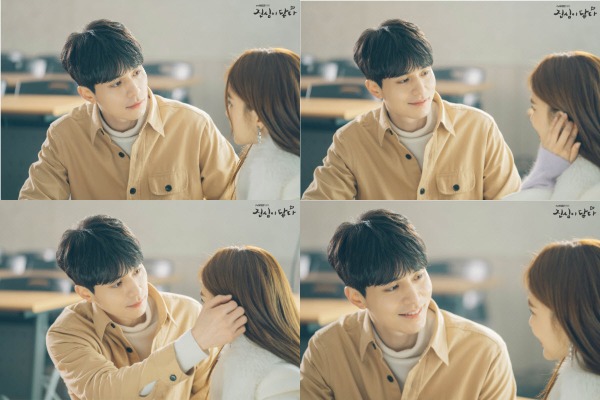 Yoon Seo is surprised to see Jung Rok in casual clothes. She thinks that they seem to be having a campus date and imagines a romantic scene, where they sit beside each other, and Jung Rok reaches out to tuck her hair behind her ear.

However, her expectations translated to Jung Rok’s reality has had her listened to him as he literally lectured her about the law.

The day is not all about lectures though as Yoon Seo is able to convince Jung Rok to watch a movie. They go to a drive-in theater where Yoon Seo learns that he has never been in one and that the last movie he watched is Avatar in 2009. Jung Rok asks her the reason why they are watching a movie when she is the one who insists about studying. Yoon Seo reasons out that they are watching a legal movie and she needs to ask him questions about it. She tries to ask law-related questions to which Jung Rok answers dutifully.

When she comments on the actress’ clothes who plays a law firm secretary, she mentions that she has colorful clothes which she wants to wear to the office. Jung Rok tells her she can, but she remembers that he opposed her choice of outfit. He reminds her that he disliked her clothes before because she was uncomfortable. He also tells her she can wear pink if she likes, much to Yoon Seo’s glee.

Suddenly, she places her hands on the armrest, however, Jung Rok’s hand is also there. Yoon Seo becomes defensive and blabbers that she is not the type to take advantage and that she has no intention of holding his hands. He says he knows, and he understands. She makes another blunder on the ride back as she tries to drink but she forgets to uncap the bottle, this causes Jung Rok to laugh and Yoon Seo teases him about it.

Se Won sees Jung Rok’s drive-in theater tickets and ribs him about having a relationship. Jung Rok contends that he was not in a relationship as he watched the movie as part of their agreed tutorial. His friend argues it does not make sense and Jung Rok replies it also does not make sense that Se Won is still living in his house. As he reads Yoon Seo’s text messages thanking him for spending time with her, Jung Rok beams.

Jung Rok and Yoon Seo are on their way out when a woman calls out his name. Jung Rok introduces Yeo Reum to Yoon Seo and she remembers she is the person he was with at the time he watched Avatar. Yeo Reum greets her and reveals that she knows who she is. As they are having tea, Yoon Seo finds out about Jung Rok’s coffee preference and that he has a child-like taste. She also witnesses how comfortable Jung Rok is around Yeo Reum.

The two continues to bicker like old friends do and it ticks Yoon Seo off. She also discovers that there is another person in their clique and Jung Rok says they should all meet together as Yeo Reum can’t avoid Se Won forever. Yeo Reum invites Jung Rok to a meal and he accepts with a smile. It baffles Yoon Seo to see Jung Rok smile like that. 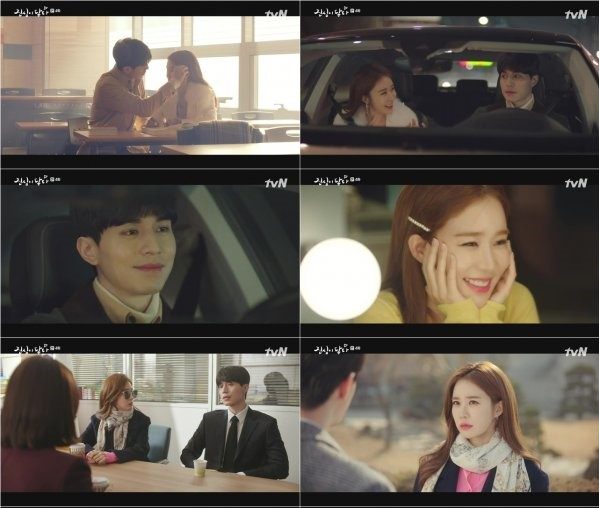 Yoon Seo is mad for some reason and she is acting up which confuses Jung Rok. As they walk back to the office, Yoon Seo asks why he is not wearing a scarf when it is cold. Jung Rok says he is not sensitive to cold temperature and that is the reason he likes winter.

Still peeved, Yoon Seo asks “Are you sure you don’t like summer?” (yeo reum translates to summer in English). Jung Rok asks for a clarification, but she says not to mind her and that he needs to stop smiling.

On her ride home, she rants with Hyuk Joon how rude it was of them to talk like she’s not present. Hyuk Joon surprises her when he says she seems jealous.

A woman approaches the receptionist’s desk and inquires about Jung Rok. She says she needs an appointment if she wishes for a consult. Jung Rok overhears the conversation and introduces himself. Inside the office, the woman hesitates to tell Jung Rok about her situation and requests for Yoon Seo to stay in the room. Seung Hee reveals that her ex-boyfriend is stalking her. He know her security passcode and it enables him to enter her house at will. She asks Jung Rok if it is possible to file for a restraining order.

He tells her that they need more evidences as there is no physical or verbal abuse involved. The woman also mentions that she has herself tested one day to find out the reason why she passes out every time they drink, and found out he has been spiking her drink. This information bothers Yoon Seo and it brings back horrifying memories. Jung Rok sees the change in Yoon Seo and has to call her name twice before she snaps out of it.

At home, Se Won is watching the news when Jung Rok arrives. They talk about the lawyer representing the case and Se Won mentions it is the same lawyer who represented Lee Gang Joon. He recalls a colleague mentioned about the case as it involved an actress.

Se Won remembers that Lee Gang Joon stalked Oh Yoon Seo before. He laced her drinks with drug and tried to frame her up. It dawns on Jung Rok the reason why Yoon Seo is bothered by his latest case. 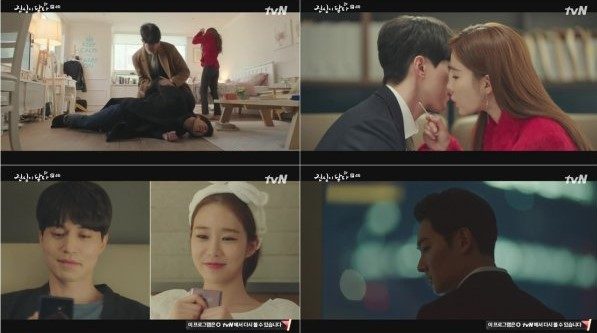 The next morning, Jung Rok tries to assign Yoon Seo to a different case telling her it is more important. However, Yoon Seon insists that the victim trusts her, and she calls Yoon Seo to give her the CCTV footage. The two women meet and go to Seung Hee’s house. Seung Hee gets the USB where the footage is stored. Yoon Seo tries to pick up a discarded water bottle and sees a man hiding underneath the bed. She screams, and the man goes out, grabs Seung Hee and tells her they need to talk. Yoon Seo tries to get in between them, but the man pushes her.

She tries one more time to prevent the guy from hurting Seung Hee. The man shifts his focus from Seung Hee to Yoon Seo and is about to strike her. Jung Rok arrives before he is able to hit her. At the precinct, Jung Rok testifies, and the police arrests the man for breaking in and illegal video filming, so he assures Yoon Seo that a restraining order will be handed out. Jung Rok tells her that invading someone’s privacy is wrong. And that the one who did it should suffer, not the victim. She needs to live a happy life and to forget the bad memories.

Yoon Seo sees a small cut on Jung Rok’s neck and she insists on treating it. Back at the office, Yoon Seo chatters about starring in a medical drama and playing the part of a top doctor, hence, swabbing and disinfecting a wound is an easy task. Yoon Seo proceeds to treat his wound and he flinches. She tells him that he can apply the ointment himself if he is uncomfortable. Jung Rok declines and insists she does it for him.

Back at each other’s house, the two exchange text messages. Jung Rok can’t help but smile as Yoon Seo fires up a text message one after another. However, their conversation is being monitored without their knowledge, and a man is seen looking out of a high-rise building.

Tension is starting to build up between Jung Rok and Yoon Seo (this time the romantic kind). Both are becoming aware of each other as a man and woman. Though they are still not admitting to that fact, their actions say otherwise. Yoon Seo acting up because she realized that she is not the only person capable of making him smile – is just too cute. I can feel Jung Rok’s confusion, but as he gets to know her, he is becoming more patient with her. In the short period, he has learned how to deal with her “tantrums”.

It is such a delight to see Jung Rok and Yoon Seo communicate through text messages. It feels like they are more open and candid with their text conversations.

Jung Rok sent Yoon Seo a “sweet dreams” message (twice!), and he was also finding Yoon Seo’s text chatter adorable, as evident in his bright smile every time he reads her message. 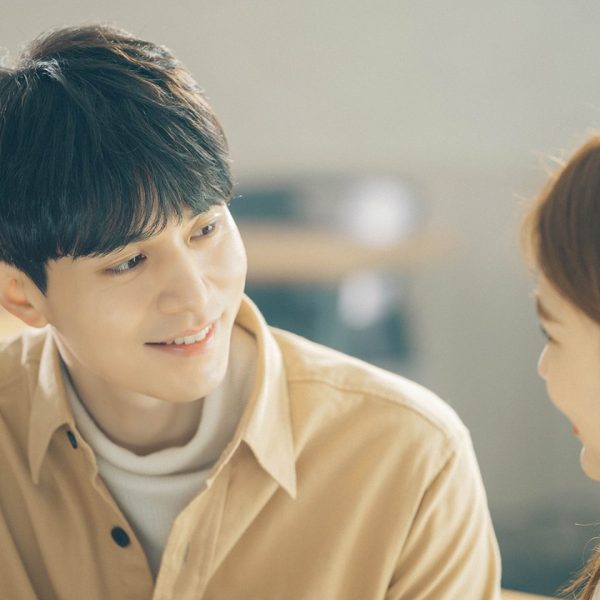 The latest episode of Touch Your Heart also shed some light on Yoon Seo’s scandal and viewers got to know a little bit about it. It also introduced a character who is the major player in said scandal. Perhaps that man shown at the latter part of the episode was the same guy who stalked and damaged Yoon Seo’s career, and it looks like he is still not over with her. I am curious to know how the new character affects our leads and the impact he will have on the story.

Catch the latest episodes of Touch Your Heart on tvN and tvN Asia.