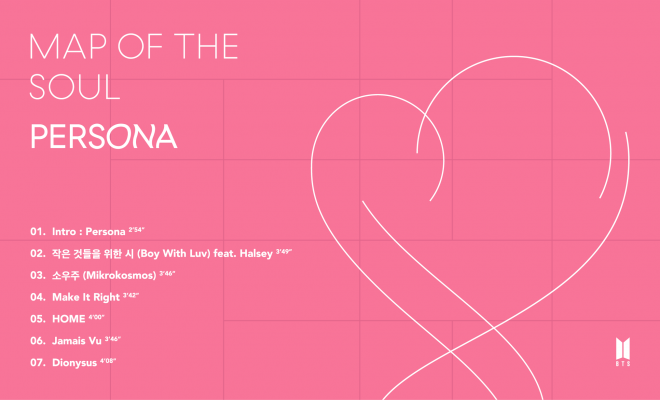 BTS Unveils Mysterious Tracklist For “Map Of The Soul: Persona” That Causes ARMYs To Google And Research

BTS is kicking things into higher gear by finally unveiling their tracklist for Map of the Soul: Persona — raising even more questions about their newest concept.

BTS is set to make their comeback with Map of the Soul: Persona by the end of this week. Now that ARMYs are inching closer and closer to this comeback, the boys are keeping everyone on their toes as they finally unveil the tracklist for their comeback.

Map Of The Soul: Persona will contain seven tracks. The album begins with “Intro : Persona”, sung by leader RM. Previously released as a comeback trailer, the rapper will answer the question he has had all his life – “who am I?” – with all honesty.

The second track is their collaboration with Halsey, “작은것들을위한시 (Boy With Luv)”. The group has previously unveiled a short teaser, which features a pop tune reminiscent of retro music, and Jungkook singing “I’m a boy with love” and Halsey’s appearance in the music video.

Given the theme of their upcoming comeback, ARMYs have been googling into how these three tracks are going to tackle the topic of the persona. Some have done their research about “Mikrokosmos”.

how could they be so deep and intellectual#PersonaTracklist #MAP_OF_THE_SOUL_PERSONA pic.twitter.com/lLE0Vp5aVJ

Others have shown interest in the fact that BTS decided to include the Greek god Dionysus, comparing his role in Greek mythology to the concept photos released beforehand.

Many have made connections between BTS’ concept and their decision to tackle the concept of “jamais vu” in their upcoming comeback.

so this definitely ties into BTS backtracking into their older eras, rewriting their old eras but having only vague memories of them so it feels very new #PersonaTracklist #MAP_OF_THE_SOUL_PERSONA pic.twitter.com/cblZfXAzpC