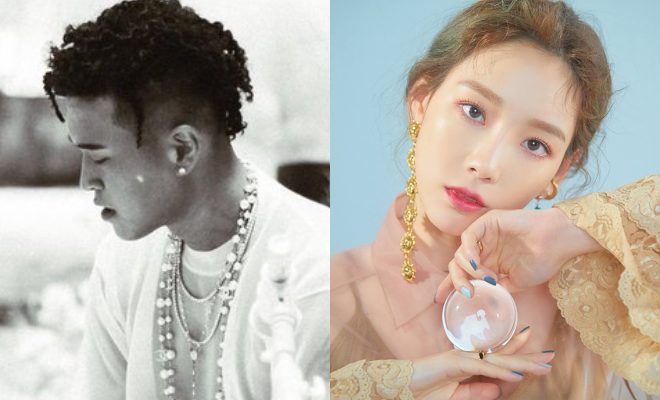 Are you ready for another sure-fire hit by Chancellor and Taeyeon?

R&B singer Chancellor taps Girls’ Generation’s Taeyeon for his upcoming single titled “Angel”, which is set to be out on May 1.

The R&B singer unveiled a look on his new single through a black-and-white teaser posted on his social media channels on April 26. The teaser photo shows the singer sitting on a chair with his eyes closed, looking melancholic.

Clad in all-white with layered necklaces, antique rings, and earrings, he posed with a white horse standing in the background.

Earlier, Chancellor released a teaser of his new single, announcing his comeback in two years. In the photo, a woman lies on the back of a horse.

Fans are excited for the upcoming team up of the R&B singer and the Girls’ Generation leader. “Angel” will be the first single of the two singers together, heightening fans’ expectations on how Chancellor’s unique tone combines with the delicate and sophisticated vocals of Taeyeon.

Aside from his vocal skills, Chancellor is well-known for his songwriting abilities. He has written, composed, and produced chart-topping tracks as the other half of the producer duo Duble Sidekick. Additionally, he has worked with top K-Pop acts, including Ailee, Girl’s Day, Apink, MBLAQ, 2PM, among others.

Meanwhile, Taeyeon recently came out with the single “Four Seasons“, which topped domestic and international charts.

Hellokpop, as an independent Korean entertainment news website (without influence from any agency or corporation), we need your support! If you have enjoyed our work, consider to support us with a one-time or recurring donation from as low as US$5 to keep our site going! Donate securely below via Stripe, Paypal, Apple Pay or Google Wallet.
FacebookTwitter
SubscribeGoogleWhatsappPinterestDiggRedditStumbleuponVkWeiboPocketTumblrMailMeneameOdnoklassniki
Related ItemschancellorTaeyeon
← Previous Story EXO’s Chanyeol Soars On Top Of iTunes Charts Worldwide With “SSFW”
Next Story → AB6IX Welcomes Fans To Their Own Version Of “Hollywood” With Official Debut Announcement