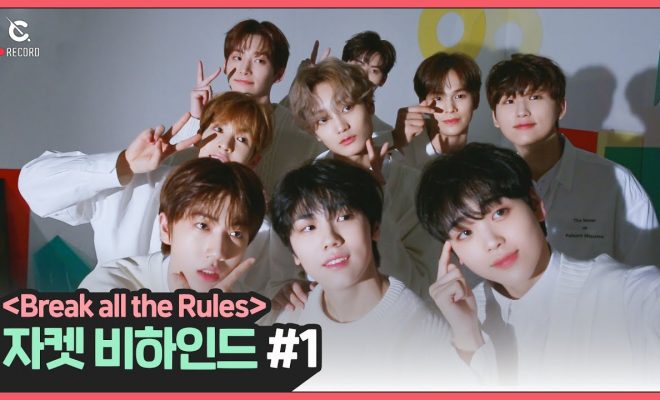 CRAVITY Releases Behind The Scene Footage Of “HIDEOUT: REMEMBER WHO WE ARE” Album Jacket Shooting

CRAVITY serves daily dose of coolness and delight all in one content and fans just can’t get enough of it!

CRAVITY shows their mischievous and hilarious side once more with a fun-packed and enthusiastic photo shoot of their debut album.

On April 22, Starship Entertainment uploaded the Part 1 of CRAVITY’s Photoshoot of HIDEOUT: REMEMBER WHO WE ARE debut album.

CRAVITY members’ pure, refreshing and pleasant charms are undeniable and is evident throughout the pictorial. Displaying youthful and lovely visuals, CRAVITY makes fans’ hearts racing in excitement with their close-up look.

The behind-the-scene footage of the jacket shooting exposes their heartwarming semblance as well as their sweet interactions. Geared with excitement, the members fill the colorful and bright set with their high spirits. Firmly establishing pure and refreshing tone, the background adorned with colorful props highly complemented their all-white outfits.

Being the first member to carry out individual shoot, Jungmo asserts how nervous he is. “It feels real and at the same time I’m nervous because I’m shooting my very first album jacket.”

“If I use the props well, I think I can get good pictures, so I’ll have to work hard,” Jungmo adds. Despite the burden of being first in the order, Jungmo successfully finished his individual shoots without a mishap.

Serim also remarks his overflowing passion by stating how to use his distinctive charms in a cool way. “I think the colors will come out pretty. Therefore, I will use my diverse emotions to capture my charms.”

Taeyoung conveys his feelings by saying, “I’m really nervous because the album’s coming out right away, but I’ll work hard.”

While waiting for their turn in the solo pictorial, Minhee and Wonjin play one round of a video game.

As the shoot progressed, the group conducts unit pictorial as well. This includes members’ sets of three: Serim, Wonjin and Jungmo in the first batch. Next comes members Hyeongjun, Allen and Seongmin. Lastly, Minhee, Taeyoung and Woobin rounds up the sequence

After finishing the individual and unit photo shoots comes the group pictorial.

Even though it was their first shooting, they draw praise from the crew by perfectly posing without awkwardness. The staff members were surprised by CRAVITY’s professional upbringing as they actively film and carefully monitor their selves with serious-mindedness.

In addition, they exhibit adorable boyish demeanor by showing off their cheerful energy and mischievous side.

Despite the busy filming, they show a lively atmosphere while constantly smiling. As they express no signs of exhaustion and such, the hearts of their fans warmed eventually.

They also give tips on filming each other. Additionally, they constantly exchange compliments and cheers as well as take selfies together.

The video clip includes the members making fun of each other while being affectionate. It also demonstrates how close-knitted their relationship is.

On April 14, CRAVITY made their groundbreaking debut in the music industry with their debut album HIDEOUT: REMEMBER WHO WE ARE. Its title track “Break all the Rules” is an urban hip-hop genre with colorful vocal melody and harmonies.

It flaunts an impressive powerful drums with an underlying message “Let’s break the frame and rules we’ve locked up”.