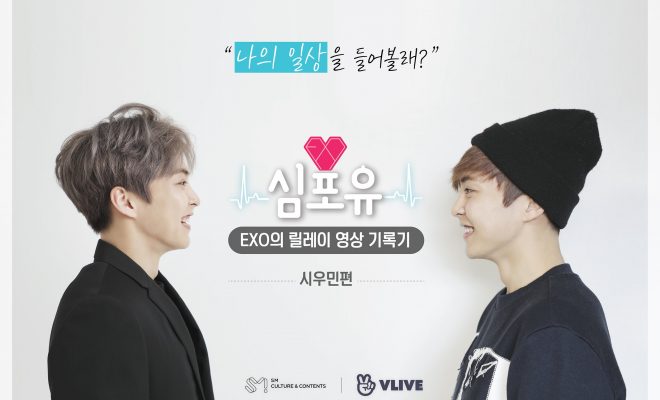 Are you ready to see more of Xiumin?

EXO’s Xiumin will start off the boy group’s upcoming V Live series which will feature the boys in their every day life.

Titled Heart4U, the V Live series will air every Monday, Wednesday, and Friday starting March 25 at 7 p.m. KST on 심포유 – my SMTelevision and EXO’s V Live channels. It will unveil the members’ personal stories and showcase their individual charms one-by-one.

Ahead of the broadcast, Xiumin greeted fans through a solo V Livesolo V Live on March 16 where he talked about the upcoming show.

According to him, Heart4U will show his daily life. It will give fans the opportunity to get to know him more as Xiumin and Kim Min Seok. He added that it is not really a holiday-kind of broadcast, but most of him spending time at home.

He also underwent a lie detector test where he answered questions about himself and tested the truth of his answers through an apparatus. Among the questions he answered including wanting to be called hyung by Suho, having the nicest body in EXO, and more.

Meanwhile, EXO members (sans Lay) celebrated the tenth anniversary of Nature Republic, the skincare brand they endorse for seven years. They performed in front of 6,000 fans at the eventevent held at Hwajeong Gymnasium in Korea University.

Nature Republic also presented awards to the members including Best Actor, Leading by Example, and more. Additionally, the skincare brand awarded honorary director certificate to the boy group to celebrate their seven-year-long partnership.

Aside from group activities, EXO members are also busy with their individual projects including a solo album for Chen and solo activities for Lay in China.